Where did the weekend go? It seems like every Monday it is so hard to get up and get going….and it seems like my weekend disappeared! On Friday I had a half day of work and then spent the afternoon taking Wrigley to the vet and then to the dog park. And then on Saturday I had to work….yuck. 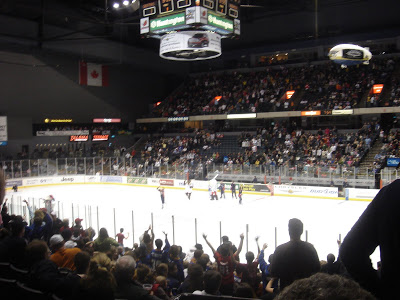 Then Saturday night we went to a hockey game with our friends Brett and Karri. I only managed to take pictures of the game….sorry. 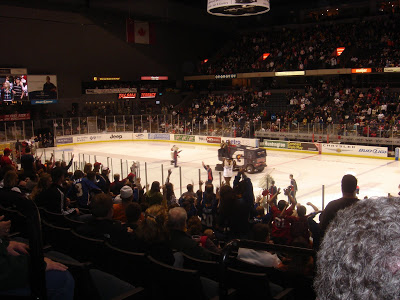 We had a great time, despite the annoying kids behind us who would not stop yelling “punch him in the face!”. I love going to the local team’s games…..they do so much during the….intermissions? What are they called? I have no idea! Someone help me out. Anyway, the time between the periods is what I mean. They have mascots skating around tossing t-shirts and hot dogs. Yes, I said hot dogs. They have a gun shaped like a giant hot dog that they used to shoot them in to the crowd. And one dog sort of exploded in the air…yuck. Luckily, we escaped without being pelted with hot dogs. 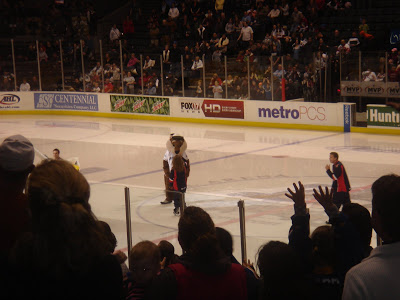 They also had the local baseball team’s mascot out there….his name is “Crash” and he is a “River Rascal” whatever that is. Anyway, he is cute. He came out for the human sling shot…which you couldn’t pay me to do. 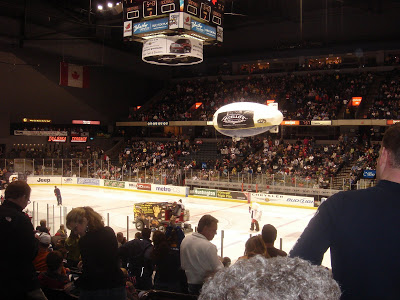 After the game we went out for drinks and met up with our friends Mo and Ali, who were in town for the weekend doing some wedding planning. Overall, it was a good night. And then on Sunday the husband and I watched movies, did laundry, took Wrigley and his buddy Rye to the dog park, and went to Costco….exciting I know. How was your weekend?