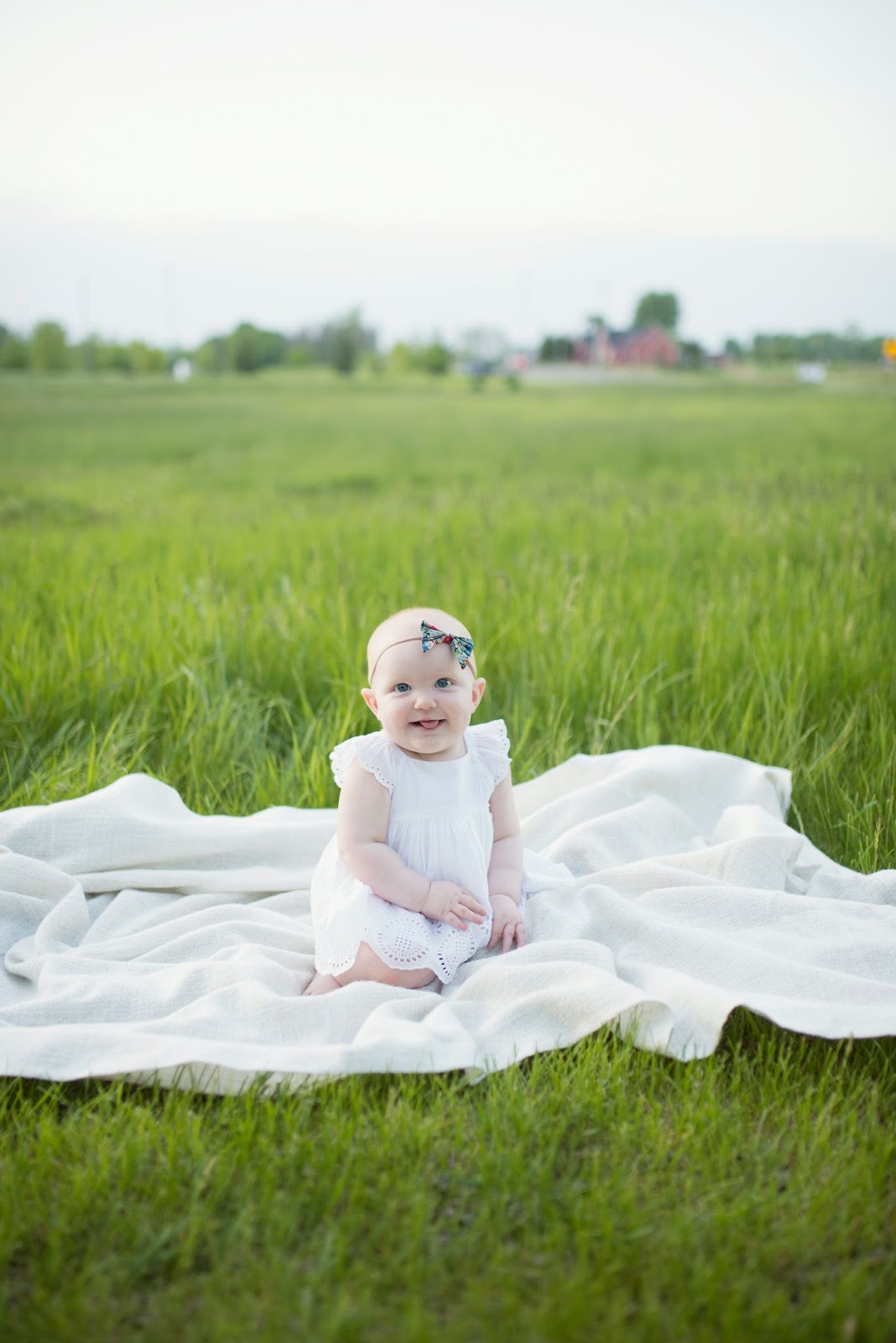 First, let me start off with a big thank you to everyone who reached out to me and prayed for our little girl. You did it without knowing everything that was going on and I really cannot express how much I appreciate you all. Sadie is 100% happy and healthy. But for about a month we were terrified something was seriously wrong.

Before I go in to all the details, I want to let you know the two very important things from all of this:

1. Be vigilant with your children and their health. YOU are the parent and YOU are the one that will notice if something is different and/or wrong with your child. And if you notice something funny, SPEAK UP. Make that doctor’s appointment and advocate for your child.
2. Our children are not our own. They are a gift from God. We get to love on them and fight for them and take care of them. But ultimately they belong to God, and not to us. As a Christian, I know this. But realizing just how true it is can be scary. Trusting in God even when things are scary can be hard. 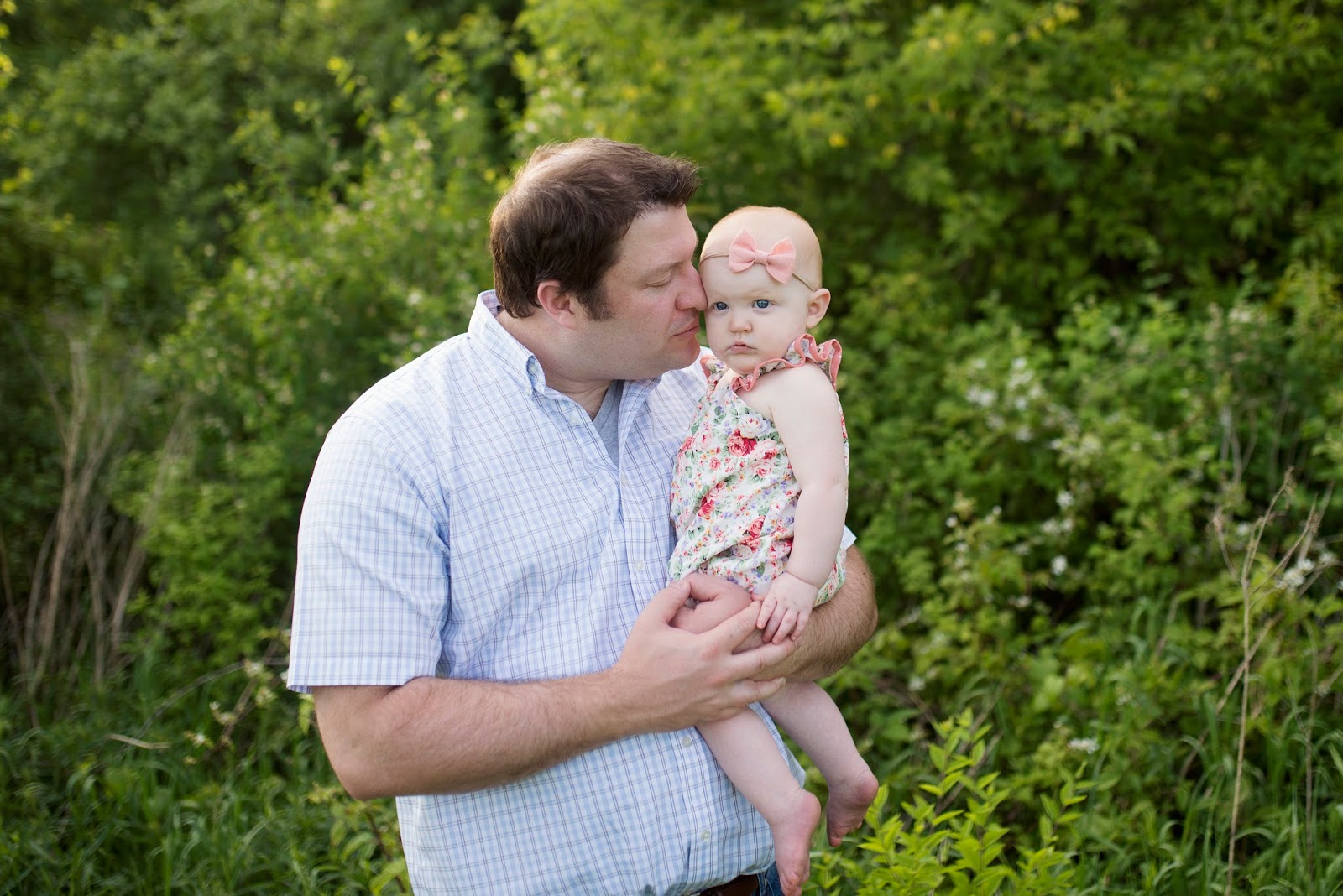 It all started with my husband.  Thank God for him.  Jon was holding Sadie one Sunday evening while I was cooking dinner and he noticed a small lump on her upper back/shoulder. He told me right away, and I went over to feel it. I totally brushed him off and said it was normal and probably her shoulder blade. I went back to cooking but Jon was persistent. Again, thank God for my husband. He said no, there is a bump here and it’s not normal. I went back over to feel it and sure enough, he was right. And I just froze. Jon took Sadie over to my mom’s house (next door to us!) and she felt it too. And right then, I started freaking out. My baby has cancer! It’s a tumor! WTF is it! What do we do???? Thankfully our next door neighbor is a pediatrician so Jon took Sadie over there for her to check it out. I stayed home with Hudson trying to calm myself down and not freak out.
Our neighbor said it was definitely a lump and that she would recommend we get an ultrasound to check it out. So the next day I called Sadie’s pediatrician and made an appointment to see him that Wednesday. And then silently freaked out for the next three days. At the appointment her pediatrician  also recommended an ultrasound, which we set up for the next week.
During the ultrasound, Sadie was a champ….but as soon as they put that wand (or whatever it’s called) on her back my husband and I saw it. A dark and scary grape-sized lump. It was solid black…and I just knew that couldn’t be good. The tech said they would call us in a few days with the results…but if it was something more serious we would hear back sooner.
Sadie’s pediatrician called me 4 hours later.
And I started crying as soon as I saw his number on my phone.
They couldn’t tell what the lump was and that he was recommending Sadie get a sedated MRI to get a better look.
We were officially scared.
When I called the hospital to schedule her appointment, I was originally told the earliest she could get in would be in 2 weeks. TWO WEEKS is an eternity when you have a child that might have something really wrong. Luckily, my mom used to work at the hospital and she let her old boss know what was going on….who pulled some major strings for us and got us an appointment that Saturday morning (2 days away, instead of 2 weeks). I was thrilled to get Sadie in earlier but at the same time upset for all the other families that have to wait because they don’t have the connections that we have. I’ve been praying every day for families in that situation…because that is so hard. And I’ve written a letter to the hospital about it too. 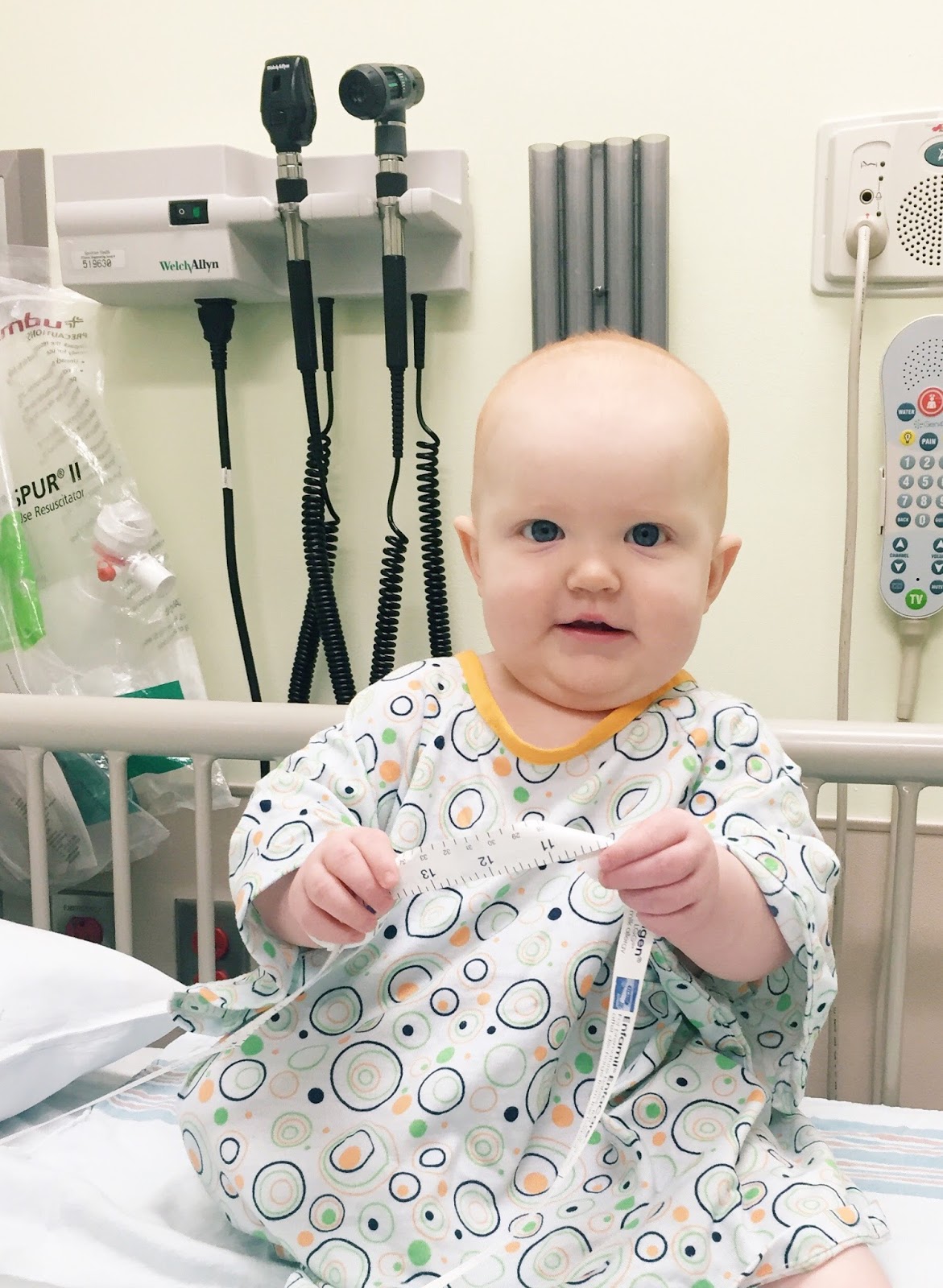 Anyway. Sadie’s MRI was scheduled at 7:15 a.m. which was a huge blessing, even though it involved us getting up early! She was going to have an MRI with and without contrast, which meant she would need an IV and that she could not eat or drink anything after 2am. We were able to get her up in the morning and put her straight in the car and go to the hospital. Thankfully she was so confused she didn’t beg for any milk. If our appointment would have been later it would have been so hard not to nurse her!
The absolute worst part about the MRI was the IV. They had to hold her down and ended up sticking her three times before getting it. And it just about broke my heart. Thank God again for Jon because he helped hold her down while I tried not to cry in the corner. Thankfully that was the worst part and it was over within a few minutes. I was able to carry her in to the room where they did the MRI and the anesthesiologist let me hold her while he inserted the sedation medication in to her IV. She was out within a few seconds and I was able to lay her on the bed and giver her a kiss goodbye. She just looked like she was sleeping.
The MRI took about 45 minutes and then it was done! Sadie woke up totally drunk from the medication and it was just about the cutest thing EVER. She was pointing at the lights, babbling, and just so dang cute. I was able to nurse her right away and soon enough she was back to normal. We took her home, gave her some extra cuddles, and waited for the results.
The whole time my husband and I just had a feeling this wouldn’t be the end of things. And we were right.
The next week Sadie’s doctor called and said they still were not able to tell what the lump was. He consulted a pediatric oncologist and she recommended we get a doppler ultrasound. Which is basically similar to the first ultrasound but this time they were going to focus more on blood flow to the lump. I was freaking out that an oncologist was involved BECAUSE CANCER. But they didn’t seem to think it was cancer….so that was good. But still terrifying.
So we went back to the hospital for an ultrasound. This time Sadie was not having it and would not sit still. I think we were there for at least a hour trying to see the blood flow to the lump. Which of course they couldn’t.
If you’ve made it this far, thank you. You are a good friend. Anyway, we found out the 2nd ultrasound didn’t show anything different and the next step would be to speak to a surgeon about a biopsy. At this point, Jon and I just wanted it all to be over. And we knew a biopsy would be inevitable. We thought maybe the surgeon would just do a needle biopsy, but it turns out he thought surgery to remove the lump would be best. We left the appointment a little shocked, but ready to get that lump out of our little girl. The surgery was scheduled for the Friday before Memorial Day.

We lucked out again and got a super early surgery time….and had to be there a little after 6am. Sadie was so confused by everything and so tired. This time she was going under general anesthesia, so they were going to wait to put her IV in after they had given her some gas to make her sleep…which turned out to be the biggest blessing. First, we didn’t have to watch the IV madness again and second, they ended up poking her 5 times to get it in. FIVE TIMES.

We met with everyone before her surgery and the anesthesiologist decided to give her an oral medication to relax her which would make me handing her over a little easier. It totally helped but Sadie was MAD about taking it! So we handed her off to the doctor and then waited. The whole thing took about a hour, mostly because of the IV trouble. 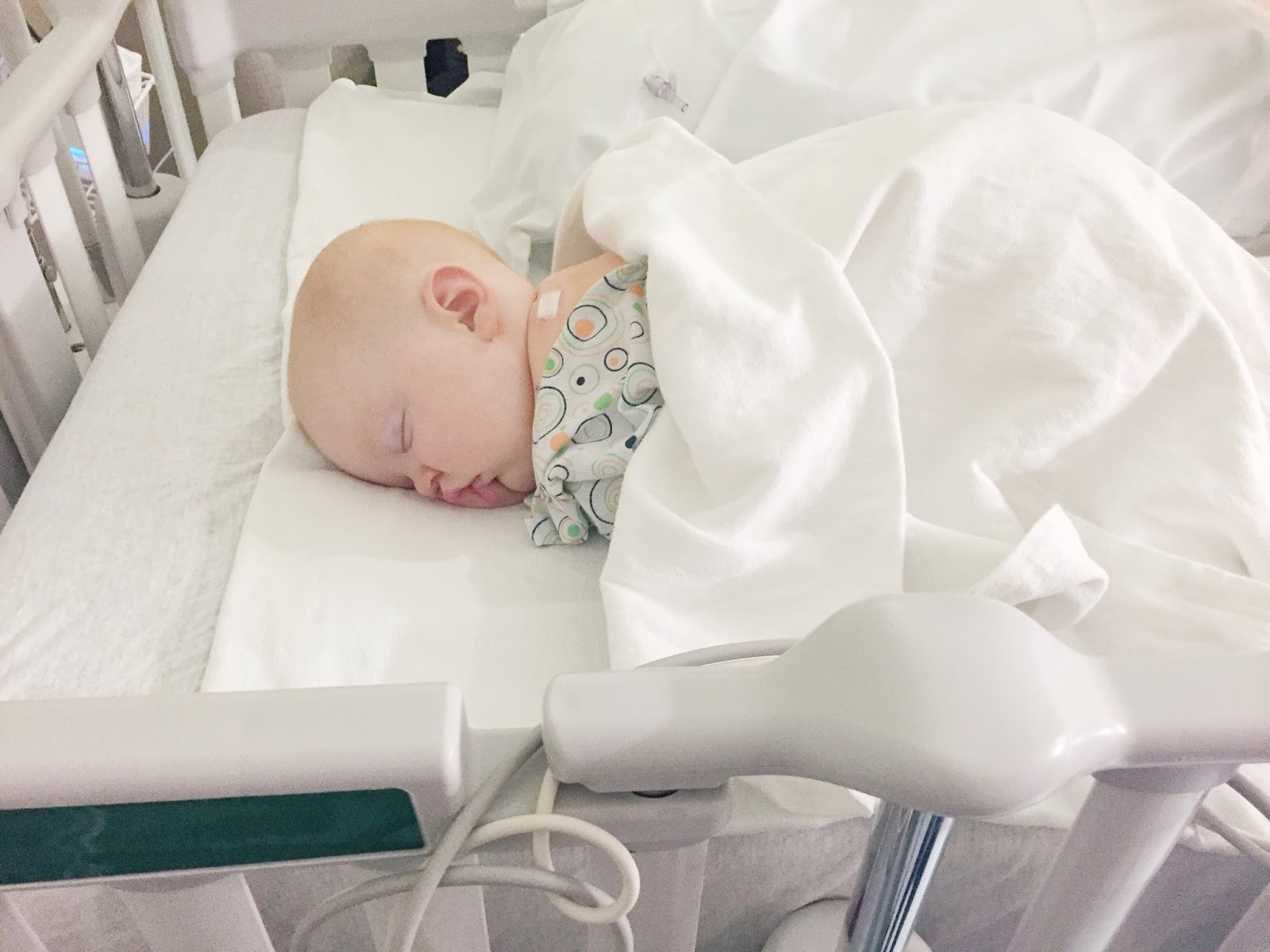 And here is our sweet girl in the recovery room. You can see the bandage on her back…she has about a one inch incision, which really isn’t that bad at all. It took her a long time to wake up, and when she did she was super cranky. I fed her, rocked her, and finally got cleared to go home since she was doing so well!
The whole day she was sort of out of it. She was exhausted and just wanted to sleep…but refused to sleep in her bed. So she slept with Jon for about 2 hours in our bed, and then slept with me on the couch for a few more hours. The next day she was back to her normal self. Praise God!
We found out a few days later that the lump was benign and something that it likely would not happen again. They don’t know what caused it, but I’m so thankful it’s out! And I’m so thankful my baby doesn’t have cancer. Even though we were told early on it was unlikely to be cancer it was still in the back of my mind during this whole ordeal. 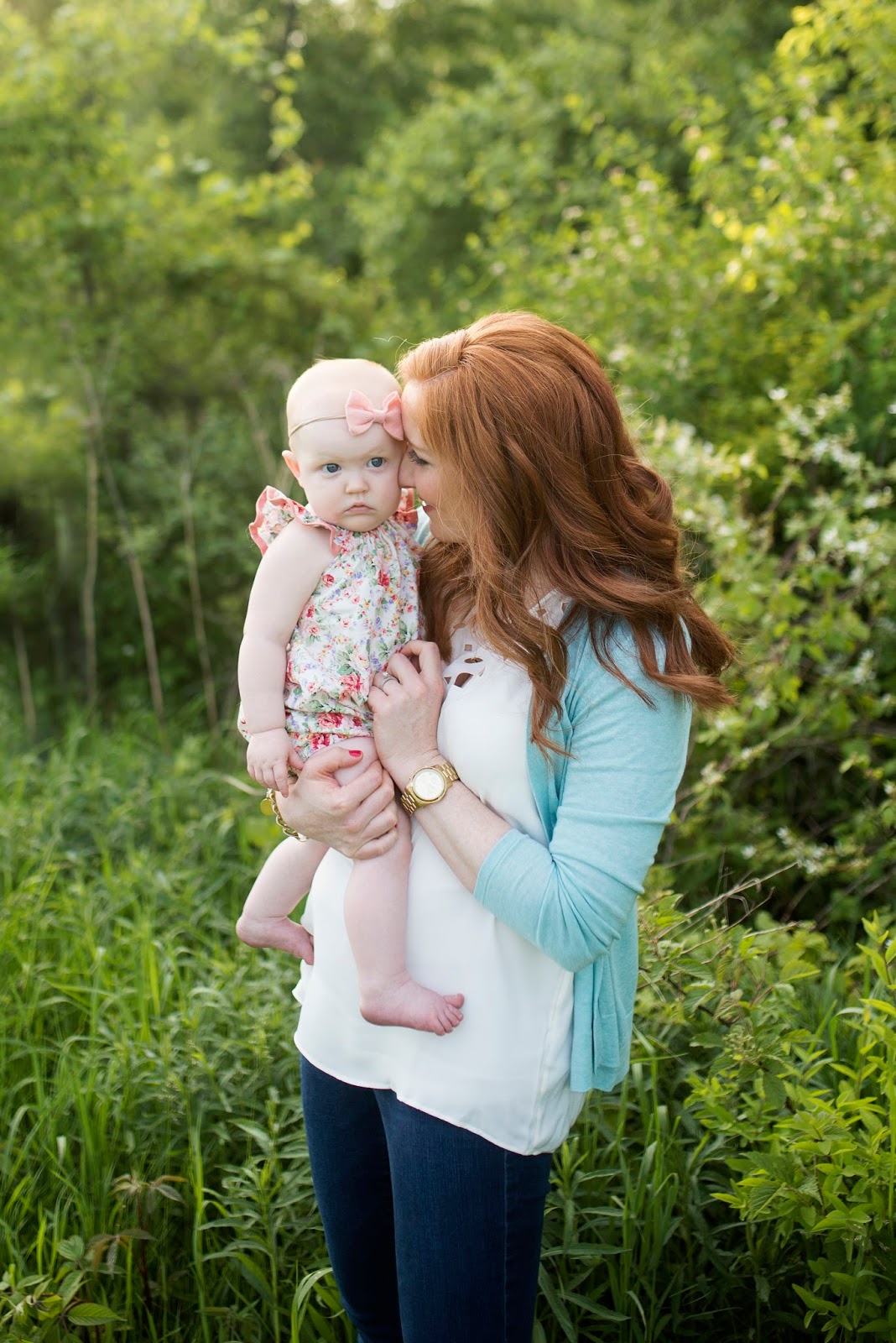 Sadie is now happy, healthy, and completely back to normal, minus her small scar. Thank you again to everyone who prayed and sent good wishes our way.

« The family that laughs together….
Toddler-Approved Snack Mix »