The boys had to go to the vet yesterday to get their yearly check-up and update their shots. Let’s just say they were not too happy about it. Henry cried the entire car ride there. Usually he is very skittish but he did great with the vet! He let her hold him and look at his teeth, ears, and eyes. He was so good! And Henry weighs a healthy 10 pounds.

And then it was Pancake’s turn. Things just went downhill from there. He took one look at the vet and hissed at her twice. He was not going to let her anywhere near him. I was so embarrassed! The vet managed to examine him while he continued to hiss and grumble. They assured me they had seen worse behavior than that! The vet said that cats act the way humans wish they could when they visit the doctor…..so true! I totally want to hiss at a doctor when they poke me! ha! And of course Pancake was not happy when he got his shots. I sort of felt bad for him. And then it was weigh in time…Pancake weighs 16 pounds! I couldn’t believe it. Fortunately the vet was comfortable with his weight since he is a bigger built cat and he is eating controlled portions of diet food. 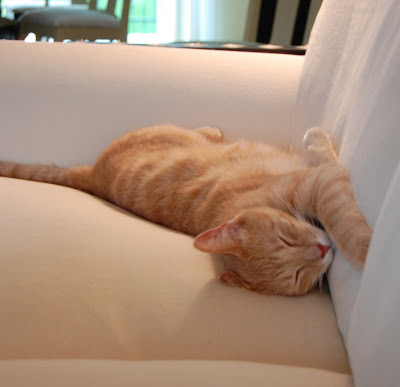 After their vet visit the boys were tired! Henry took a little nap on the couch. 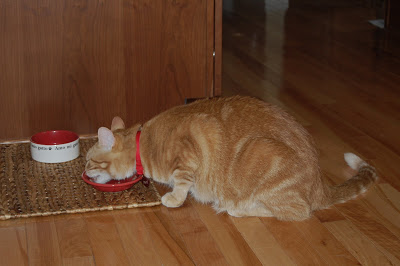 And they both had a little snack when we got home….not on Pancake’s diet plan, but oh well!

« UP
Master Bedroom: Before and After »

The only kid who cooperated for a photo today.

I was going to say “Tuesdays are for twirling”

Merry Christmas from our family to yours!