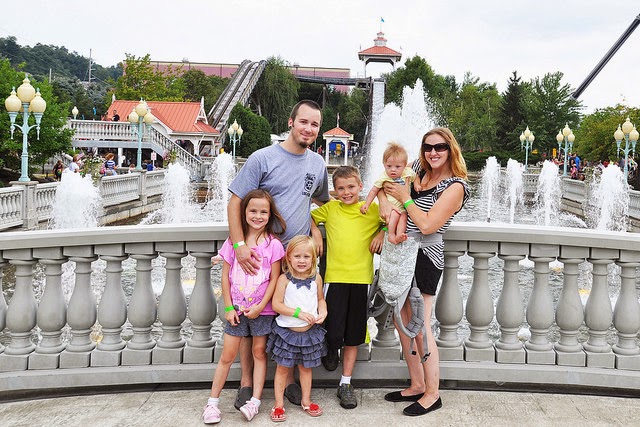 Hi, my name is Stefanie and I blog over at Lexi Loo, Lily, Liam, & Dylan Too. When I found out baby #4 was on the way, I didn’t even think about whether I would breastfeed or not. I knew I would.

After nourishing 3 children, I knew what choice was right for us. My firstborn was formula fed, with no regrets, and my next two were exclusively breastfed. Breastfeeding was convenient and free!
With my first pregnancy, I wasn’t sure if I would breastfeed or formula feed. I decided to keep an open mind and decide at birth. After preterm labor, weeks of bed rest, weeks of grieving, a long labor, and giving birth a month early, I was mentally and physically exhausted. When the nurse asked if I was going to breastfeed or formula feed, I said formula without another thought. About a week after we came home, I was curious. I tried to get my son to latch on, but he didn’t want to. I never tried again, and never regretted it. My son was always very healthy and very smart. He’s nearly 10 years old, and rarely gets sick. Formula feeding worked well.
When I was pregnant with my second child, I knew I wanted to give breastfeeding a try. I was a rookie. Even with the help of a lactation consultant, I wasn’t prepared for just how much it hurt! During a particularly horrible night in the hospital, I decided to quit, and I gave my daughter a bottle. Once home, in a more relaxed setting, I gave it another try. It worked, the pain eased, and I exclusively breastfed my daughter until she was 11 months old. Our breastfeeding journey came to an abrupt end after I had a medical procedure done. My daughter was unable to breastfeed for 24 hours, and she refused from that point on. I was bummed, but still proud of how long we went!
Four years later, when baby #3 was born, she latched on immediately after birth. I knew exactly what to do and it barely hurt. Our breastfeeding journey was easy from the start and she nursed until she was 14 months old. Sadly, I can’t even recall the last time I nursed her. She gradually weaned until she just wasn’t interested anymore.
Two months after she weaned, we were very surprised to find out baby #4 was on the way! Thankfully, I was healthy and still taking the remaining prenatal vitamins from my recent breastfeeding days. Other than the awful morning sickness I had until the day I delivered, which was exactly like my previous pregnancies, my pregnancy was uneventful.
I went into labor three weeks before my due date. In between the awful contractions, I was giddy with excitement. My husband and I argued names and took bets on whether the baby was a boy or a girl. We couldn’t wait to meet him or her!
When our child entered the world, my husband cheered, and shouted, “It’s a BOY!” We cried and hugged, but we were surprised when the doctor immediately handed our son over to a nurse instead of handing him over to me.
The room was eerily quiet for what felt like an eternity. Our son wasn’t crying and medical professionals crowded around him. Nobody would answer our questions or let my husband come over to see him. The room finally emptied, and the remaining nurse handed our son to me and walked out the door. My sweet baby boy stared into my eyes, and I just KNEW. My heart plummeted and my world came to a crashing halt.
Sure enough, a doctor eventually walked in and explained that he and another doctor believed our son had Down Syndrome, based on a few physical characteristics. Our son was whisked away for testing, and we were left alone to grieve the loss of the child we thought we were having and accept the new life we were given.
The memories of that day are foggy. I remember the feelings, but I can’t remember the timeline. At some point, Liam was back in my arms, and in that fog, it registered that I had to feed him. I lifted him to my breast, and tried to get him to latch on. I remember staring down at him and watching my tears drip onto the top of his head. 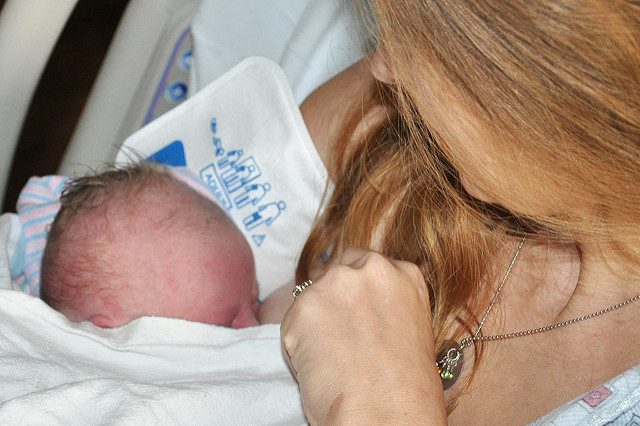 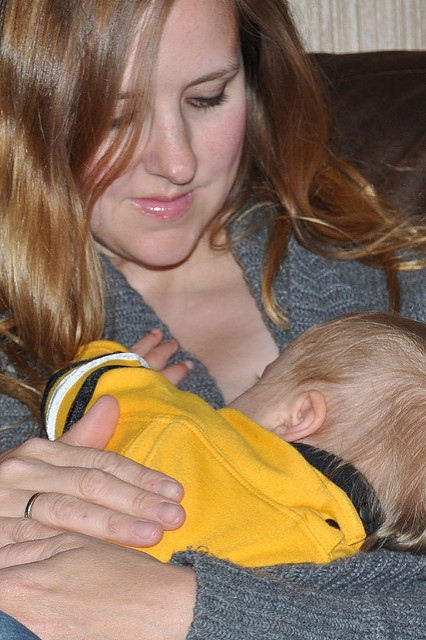 This post is going live at perfect time. October is Down Syndrome Awareness Month. There are so many myths and misconceptions about Down Syndrome. Although there are many babies with Down Syndrome who do have feeding issues, there are those who can and do breastfeed effectively. Sadly, many medical professionals tend to push formula feeding, thinking it solves everything. My hope is that this post will help another mother who finds herself in a similar position.
It IS more difficult to breastfeed a child with Down Syndrome. They tend to be harder to wake at the beginning and their suck is a lot weaker, due to low muscle tone. With determination, support, and lots of practice, it is very possible to succeed. I know there are obstacles to overcome. When safety is an issue, such as aspiration, formula is absolutely the right choice.
No matter what feeding choice you make, with love and proper nutrition, your child will thrive.
We succeeded with the help of 3 medical professionals who believed in Liam and knew breastfeeding really was working for him.
Despite being told over and over again that a baby with Down Syndrome could not breastfeed effectively, we stuck with it. I am so glad I went with my gut instinct and I’m so proud that Liam is still going strong. Liam is perfectly healthy and he is THRIVING. Breastfeeding was the right choice. 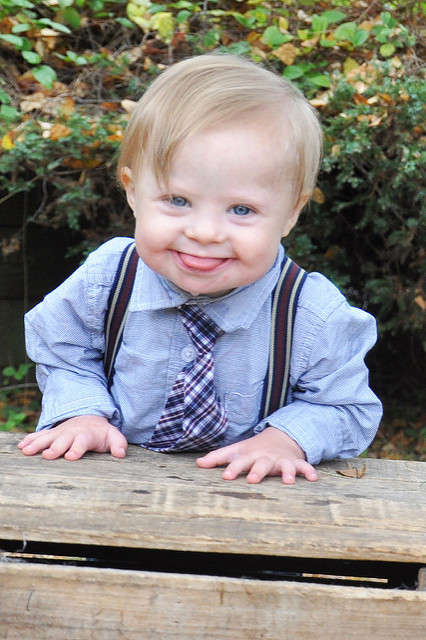 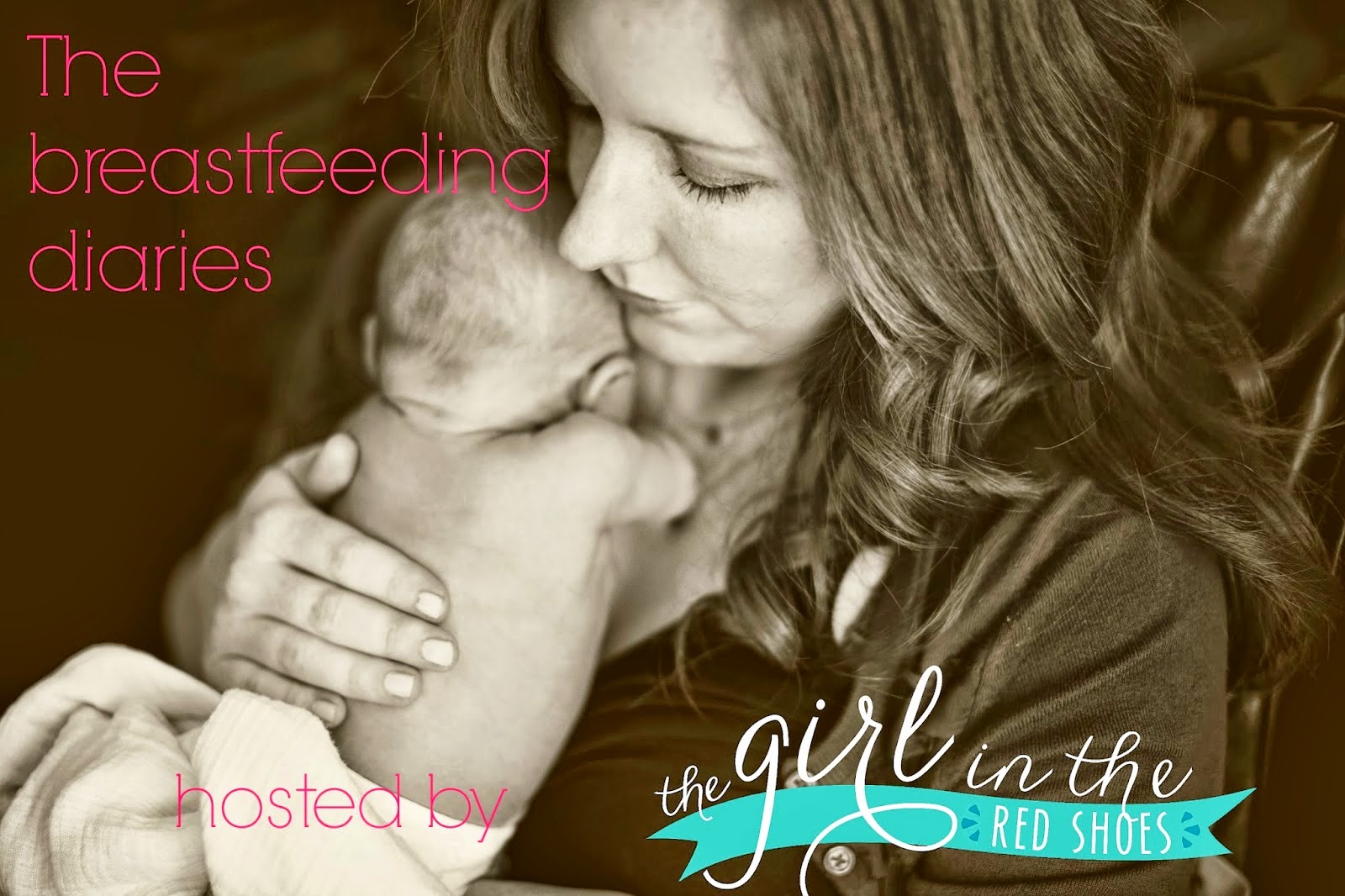