Hello there!  I’m Julie and I blog over at Team Patterson. I’m Momma to triplet girls, Samantha, Taylor, and Mallory, born on June 7, 2013. They are almost 10 months old and keep me very busy.
I can’t complain though, because I love every minute of being a Mom to these precious babies. I want to thank Julie for starting this series and allowing me to contribute my story.  I know it was something I read during my pregnancy that helped me prepare for what was to come. Having a Mom’s perspective is so much more relate able than what you learn from a doctor or lactation consultant.

During my pregnancy, countless times I was asked the question, “Are you planning on breastfeeding TRIPLETS?” Confidently, I would answer, “Yes.” For some reason, I was never daunted by the thought of having to breastfeed three babies. I was excited to provide the best for my babies. I had read in one of my books about having triplets that it is possible and that your body can produce ample amounts of milk when you have multiple babies. That boosted my confidence and I knew I was going to try my hardest to provide what I could for my girls. Due to pre-term labor, I was put on hospital bed rest at 23 weeks. I made it almost 12 more weeks before my beautiful babies were born. I had plenty of time to prepare myself for breastfeeding. I took a breastfeeding class, had a lactation consultant visit me in my hospital room, watched Youtube

videos, and read La Leche League’s breastfeeding book.  But nothing completely prepares you for what is to come. 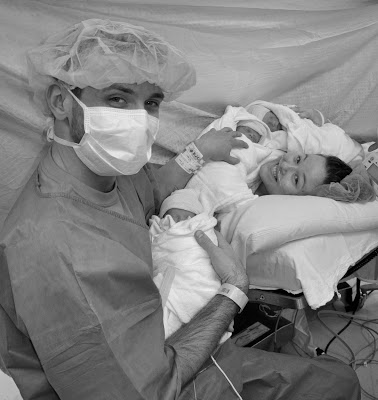 My babies were born on a Friday morning by scheduled C-section at 34 weeks and 3 days.  They were 6 weeks early for normal gestation so they were taken to the NICU. They were born at 8 AM and by 11 AM I asked for a lactation consultant to come to my room to help me get started with pumping. I was told to start pumping as soon as possible or within 6 hours of their birth. I had been lactating since 24 weeks so I was pretty sure I would be able to produce something. After seeing the lactation consultant and learning the ropes about pumping, I diligently pumped every 2.5-3 hours. I began getting very small amounts of colostrum, but it was something.  My husband was there every step of the way. He cleaned my pump parts, kept track of the amounts from every pump, ran the freshly pumped milk down to the NICU, and made sure to get every last drop of milk out of the bottles.  I couldn’t have done it without his hard work and support along the way.

bottle of “liquid gold”. The nurses would alternate which of my girls were given my milk. The hospital offered donor breast milk, which we chose to give the girls over starting them on formula. Due to their difficulty sucking and swallowing, I was unable to nurse immediately. They all had NG tubes and didn’t try bottles until day 3. The doctors allowed me to try nursing on Day 5. 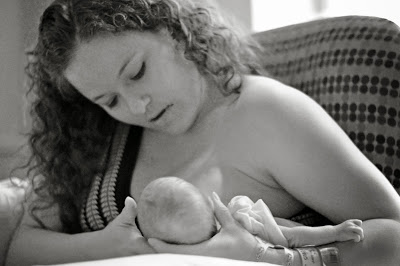 My first time nursing was with Samantha. She would latch and suck a couple times before letting go again. This went on for days with all three girls. The girls were on a strict schedule in the NICU so while I was trying to nurse one baby, the other two were being bottle fed or fed through their NG tubes. Because they were premature, they had a hard time staying awake while eating and had difficulties latching. I would try to breastfeed each baby at least once per day as well as pump every 2.5-3 hours per day. This schedule was difficult especially since I was commuting from home every day and I was also recovering from 3 months of inactivity and a major abdominal surgery. 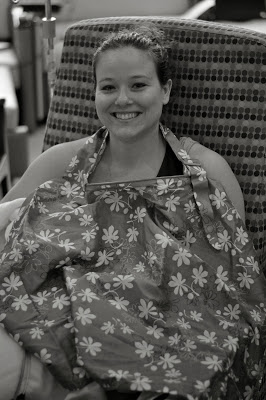 The latching became painful for me very quickly. I would be reluctant to try breastfeeding due to the discomfort ,but I knew that I needed to get in the habit and get the girls used to it. There were lactation consultants in the NICU that came to help me often. They showed me correct positioning and introduced a nipple shield that seemed to help a little. Just as I thought one would get the hang of it, she would barely latch at the next feeding. I had two lazy eaters that would fall asleep and one smart eater that knew if she didn’t latch well that a bottle was coming her way. After two weeks in the NICU, my babies were healthy enough to come home. They were eating all of their feedings by bottle and no longer needed NG tubes. They had still not caught on to nursing and it was time to begin this journey at home with 3 babies. 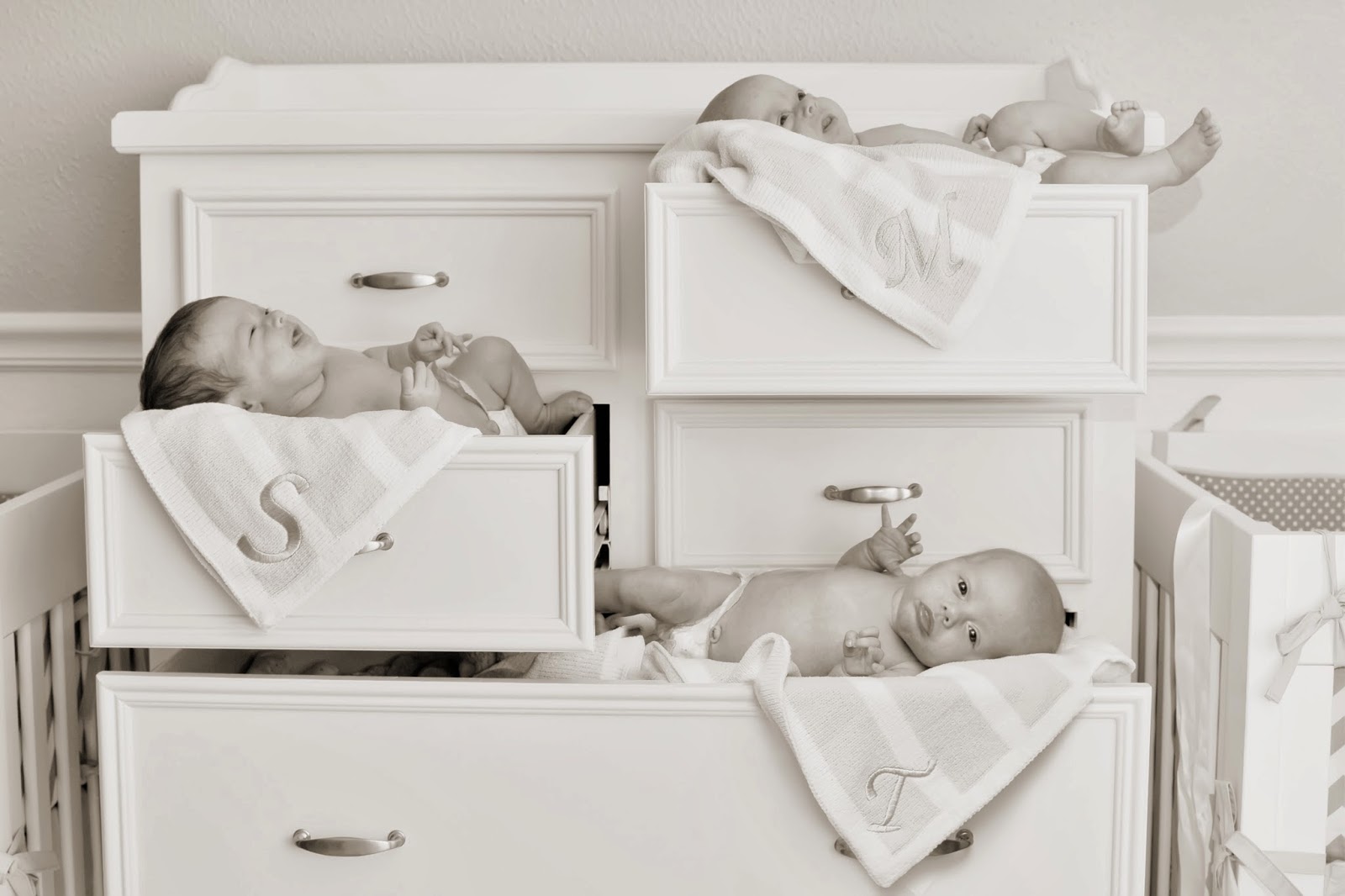 For almost 6 weeks, I continued to try to nurse my little ones. I would begin nursing a baby and when she became fussy or the next baby in line became fussy, I would hand her off to my husband to bottle feed. It was like an assembly line. However, this would take us about 2 hours including me having to pump afterwards. When the babies ate every 3 hours, this was not very efficient. After 6 weeks, the girls still couldn’t nurse to fill themselves up, I was in a lot of pain because they did not have good latches, and I became frustrated that I didn’t have enough time to play or snuggle with my babies. I made a decision at that point to stop trying to nurse. I would pump and bottle feed my babies to speed up the process and give me more time to interact with them. I decided that for my family, this was best for all of us. 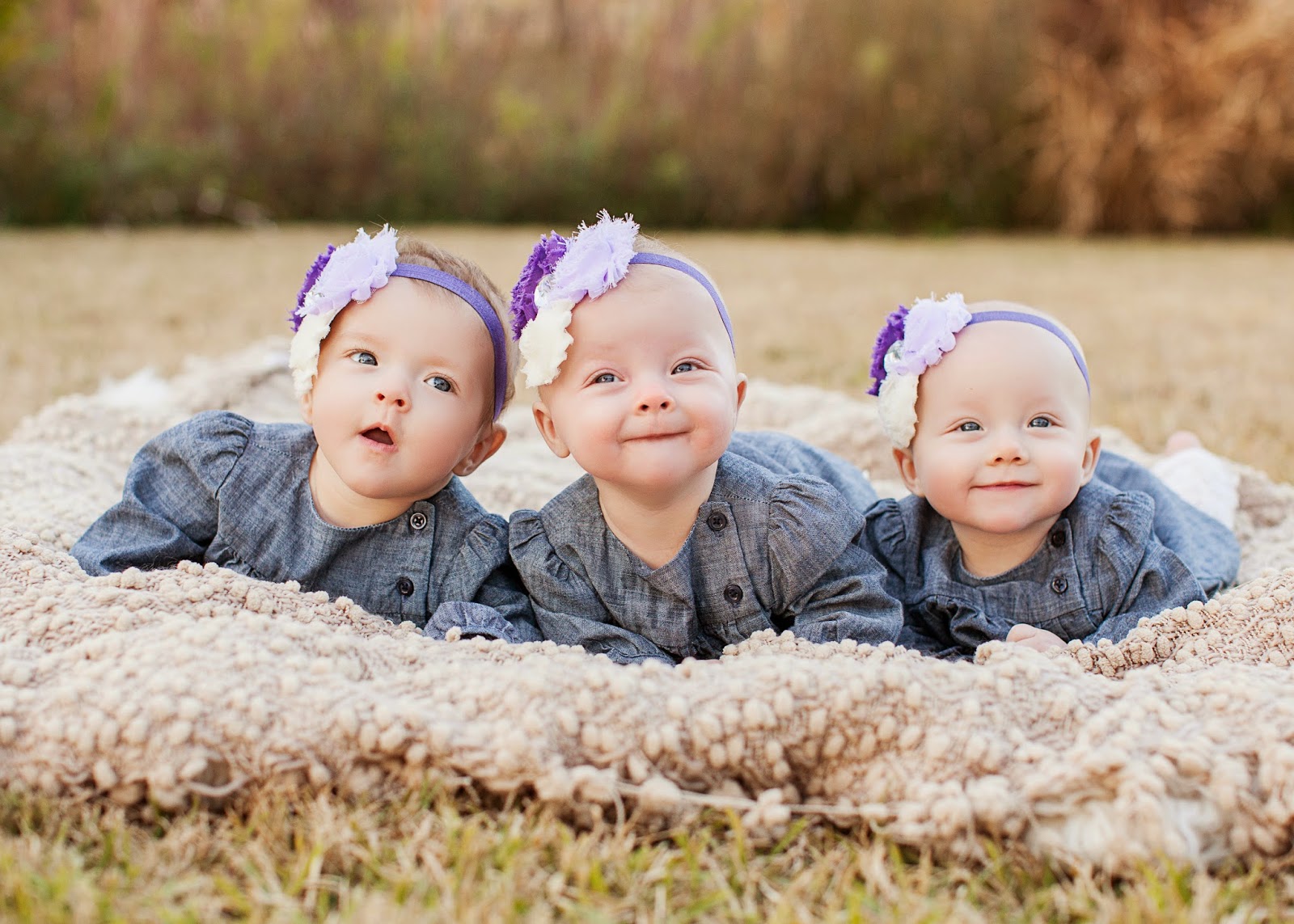 Around 2 months old, we discovered Samantha and Mallory have a milk protein and soy allergy. I have had to cut both of these out of my diet, but the beauty of having three babies is Taylor was able to finish all of the milk in the freezer that Mallory and Samantha could no longer have so nothing went to waste! Yes, I miss cheese and ice cream, but it really hasn’t been that difficult.  There are plenty of substitutes and I do it for them, so it makes it easier.

What is not easy, is to find all of the calories I need to eat in a day. They say you need to consume 500 more calories per day per baby. That is an extra 1500 calories. I’m not sure if I reach that but I know I am always eating and never feel full (and I weigh less than I did when I became pregnant). I eat three large meals plus I have multiple snacks per day. I feel like I’m always eating or drinking something! 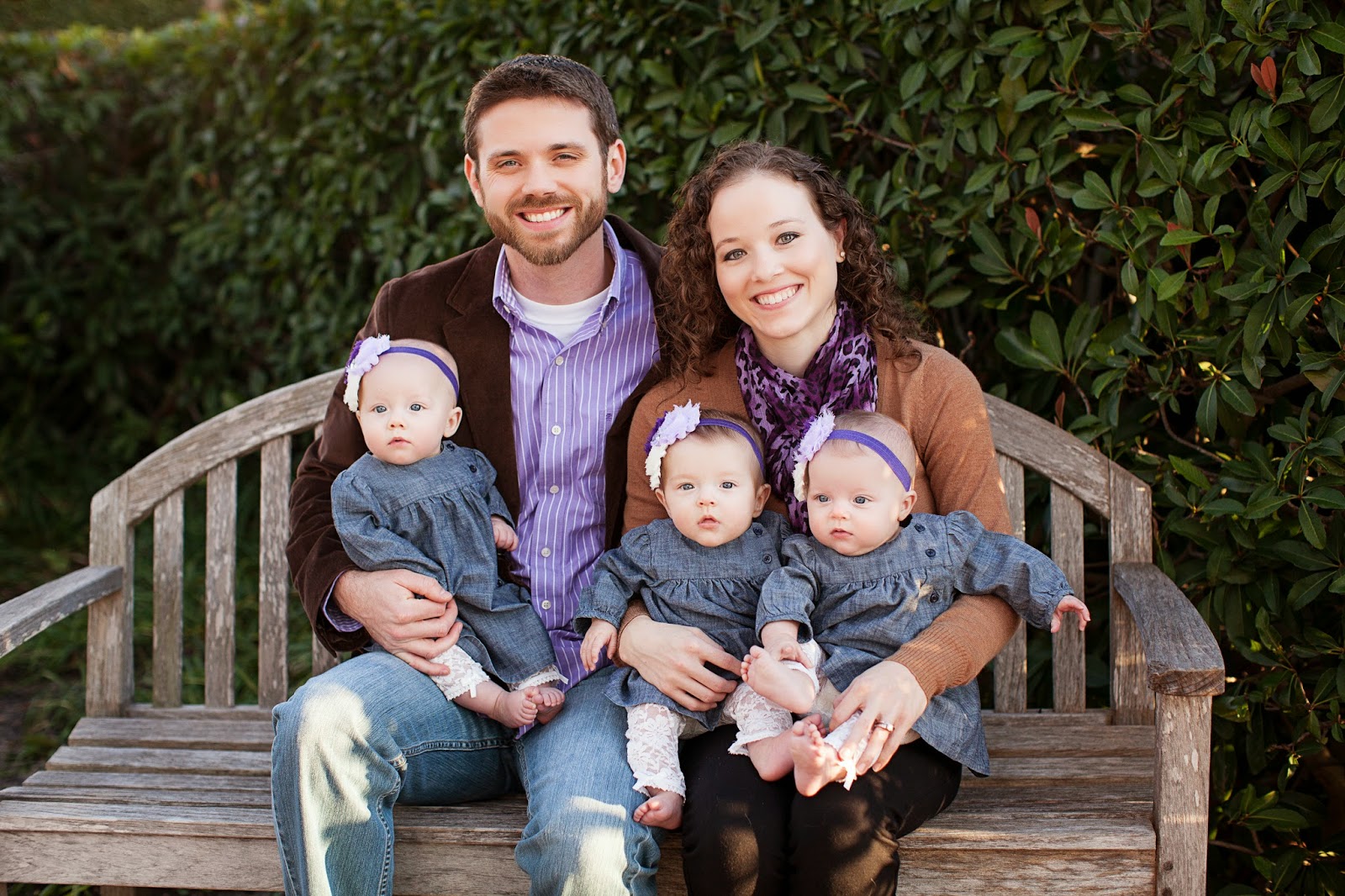 Up until 6 months old, the girls were all bottle fed exclusively pumped breast milk. It was at this point that they began eating more than I could supply. I still had a large stock pile in the freezer, but began supplementing 1-2 oz per day of formula per baby. That number has gradually increased and I now give Taylor one formula bottle, Mallory a half & half bottle, and Sam still gets all breast milk since she doesn’t like the formula. I started off pumping 7-8 times per day at the beginning and have decreased that number to 4-5 times per day. I still produce over 2 liters of milk a day to give to my babies. The human body amazes me. 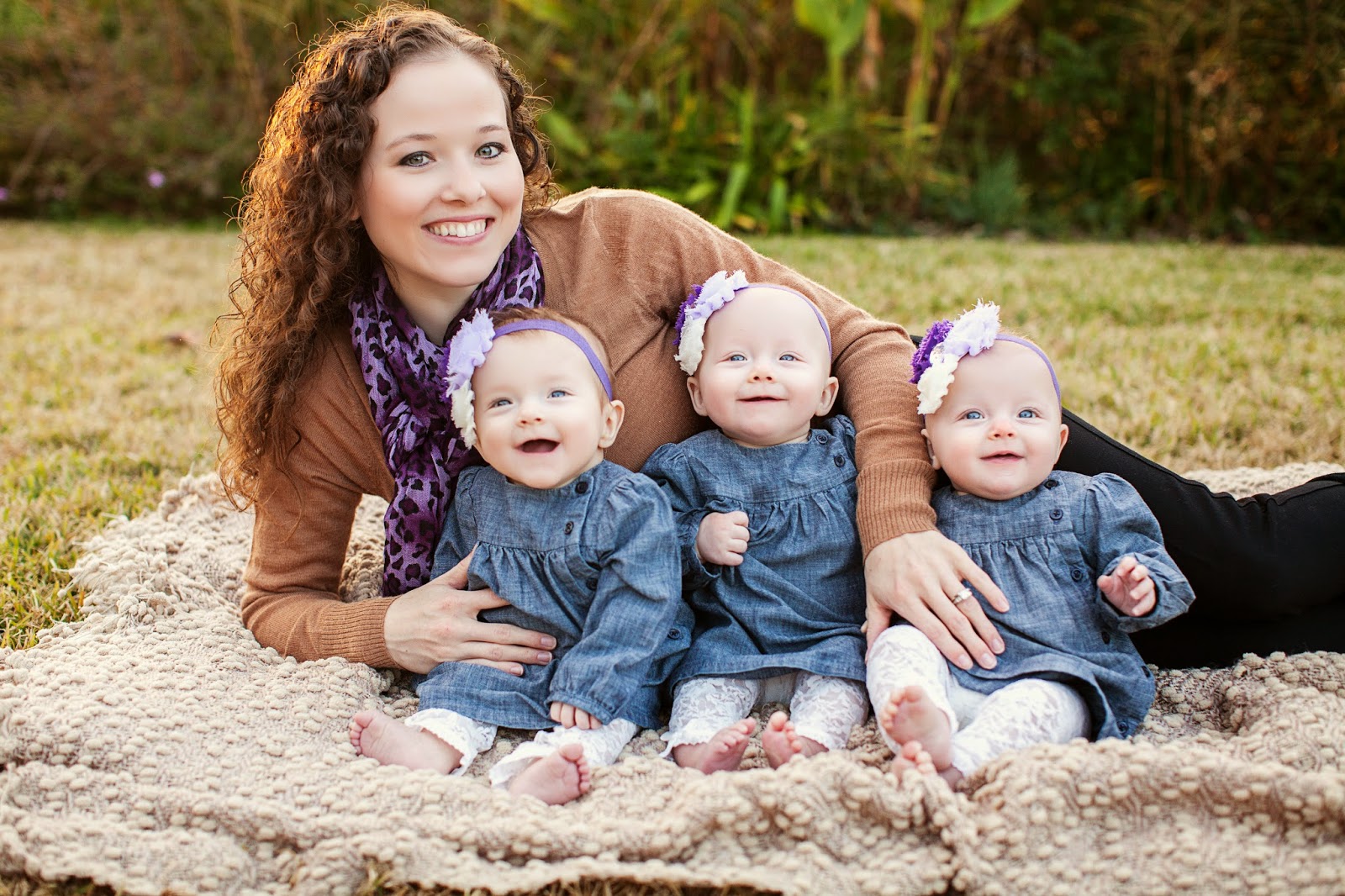 I’m so happy that my body has been able to keep up with my triplets. It is such a privilege to be able to provide my girls with breast milk. I sometimes think about how things could have been different if they had learned how to nurse or on the opposite spectrum, how it may have been ‘easier’ to give them formula from the get-go. But, I’m truly happy with how it worked out. Exclusively pumping worked for my family, our schedule, and our sanity.
This journey has been so rewarding. My goal was to provide my girls with breast milk for 6 months and now that we are past that, our goal is 1 year. With the love and encouragement of my husband and family & friends, I have confidence that we will be able to make it a full year. Especially since Mallory and Samantha can only have an expensive and yucky formula that
has no dairy or soy, I want to continue to provide them with the good stuff Momma makes. Being a new Mom to triplets has been the most rewarding and life-changing experience of my life. I’m proud of myself for continuing to pump so often to keep up my supply. I can’t wait to see what the ending to our breastfeeding journey will be. If you are interested, I share more tips about exclusively pumping on my blog. Thanks again, Julie, for letting me share my story on your amazing series 🙂 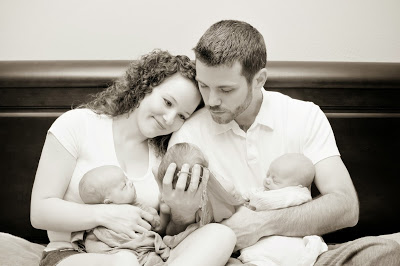 ~  Julie, Blogging
over at Team Patterson about her life as a triplet Momma. 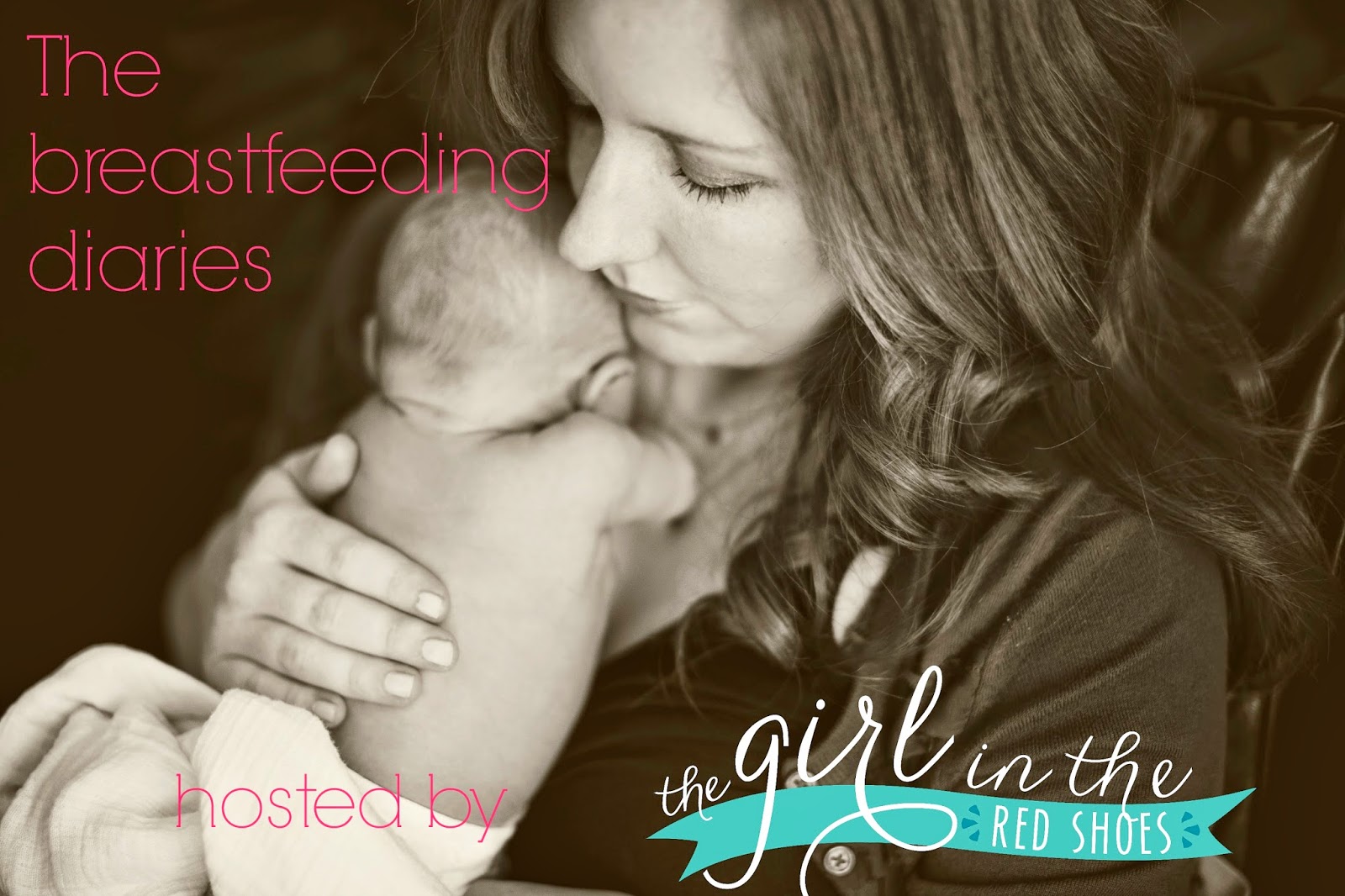 Be sure to catch up with the rest of the Breastfeeding Diaries at the top of my navigation bar. If you would like to submit your story please email me at thegirlintheredshoes @ gmail

« Come on Spring!
Trucks and wagons and puppy-dog tails »