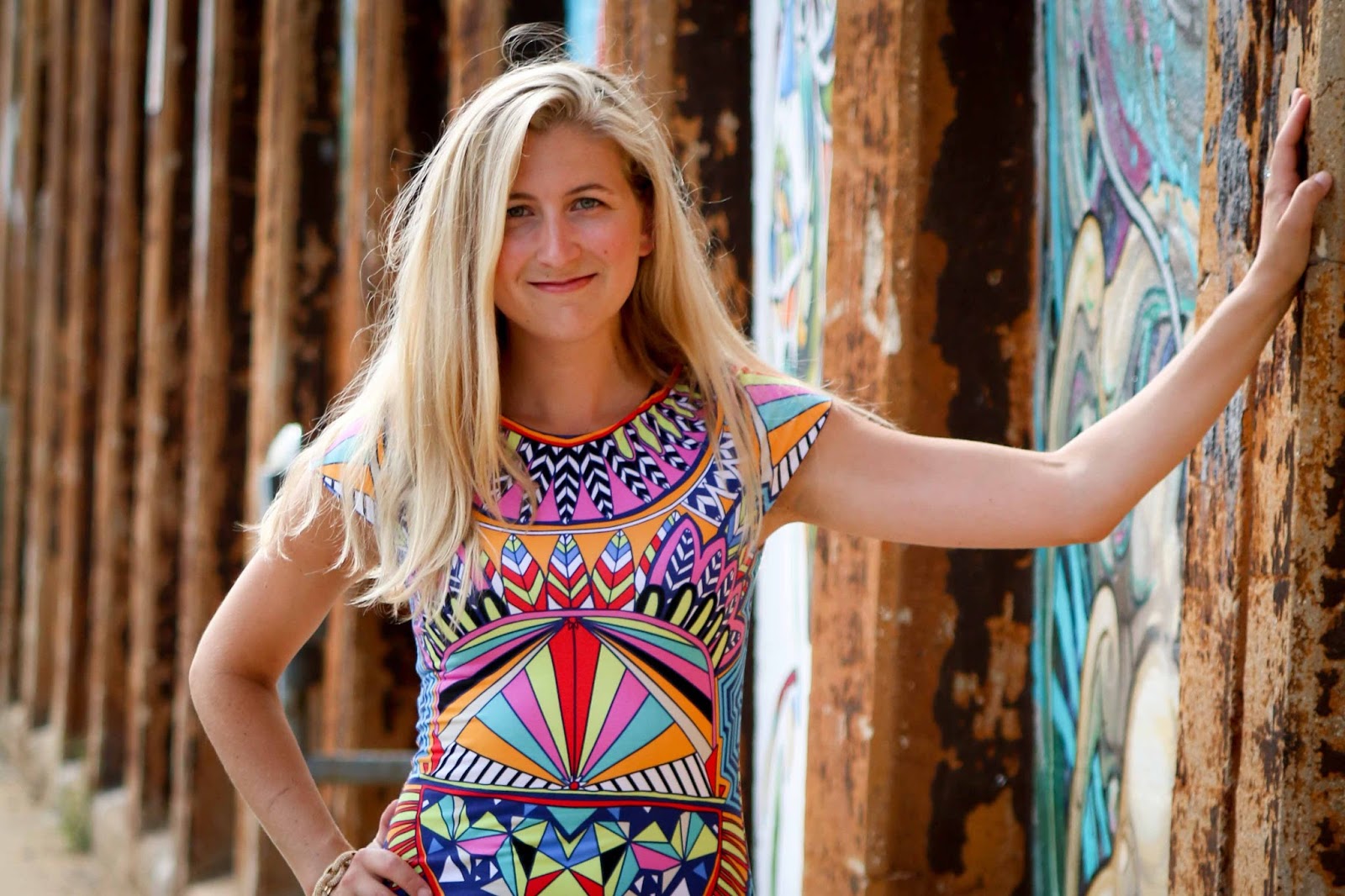 Hi! I’m Annie, I began reading Julie’s wonderful blog almost ten months ago and immediately bonded over her pregnancy, being a toddler mom and her wonderful series, the Breastfeeding Diaries. I blog over at All Things Big and Small, where I talk about motherhood, budget-friendly decorating, and trying to be stylish mom of young kids (even though I am usually rocking a VERY messy bun and yoga pants!) I am a mother of two: my son (6 months) and my daughter (2.5 years). I am currently exclusively breastfeeding my son, and plan to continue until he is about a year, as I did with my daughter, when we can start cow’s milk. I want to share my breastfeeding story today because although I have been able to breastfeed both my children, it certainly wasn’t without its challenges in the beginning and I hopefully can help any new moms out there confronting the same challenges I faced. 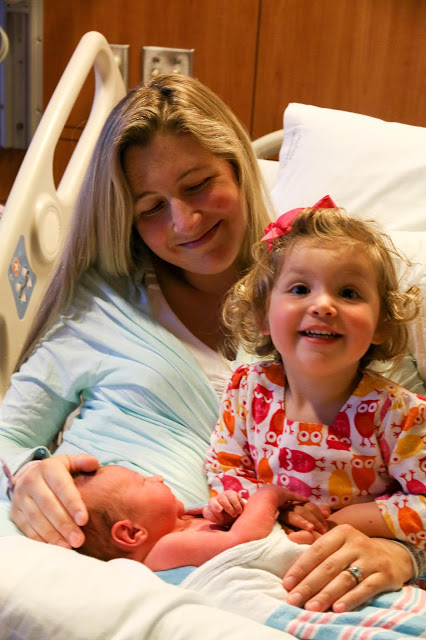 Both times after delivering, I was very fortunate to be able to breastfeed within the first hour with the help and guidance of wonderful Labor & Delivery nurses. With my daughter, especially, getting the latch right wasn’t super intuitive and even after taking a breastfeeding class, it helped to have an expert give pointers. I ended up using a nipple shield with my daughter for the first two weeks. Eventually I didn’t need it anymore but it did help. With my son, it was smoother and I didn’t need it but I still appreciated the advice of the nurses. Although I had breastfed my daughter for 14 months, nursing a 14 month old is very different than a newborn and you have to work together as a “breastfeeding team.” It gets easier over time, and you get the holds down but if it doesn’t happen right away for you, don’t worry and don’t be afraid to ask for help!
A few days post-delivery, the engorgement started (seriously, ladies get ready for Dolly Parton boobs) and the plugged ducts began. I had gotten recurrent plugged ducts and one bout of mastitis with my daughter but it was much more persistent with my son. Some background: for some reason, both my babies were huge snackers. They were constantly eating a little bit, and then falling asleep, and then waking up and wanting some more. My son was the worst because for the first four weeks, during the daytime, he was literally nursing every 20 minutes (and at night every 1.5 hours). It was very challenging and not only was I exhausted; but he wasn’t emptying my breasts effectively, which lead to constant plugged ducts and two more bouts of mastitis. (Mastitis is a breast infection, and I hope you never have to experience it!) By the time he was four weeks old, I was getting a new plugged duct every 2-3 days. After talking to my midwife about my history and my current issues, she recommended I see a lactation consultant. Although weight gain wasn’t a problem (he was gaining over a pound a week) she wanted to make sure that my son’s latch was solid and therefore able to drain the breast effectively.
So I brought him to the lactation consultant with my toddler in tow, which I will tell you was quite the experience. My daughter (2 yrs) found a breast-shaped pillow complete with nipple (used as a teaching aid), which she decided was going to be her hat and purse. Seeing my daughter parade around the office with a boob-pillow strapped to her head was the highlight of the trip! 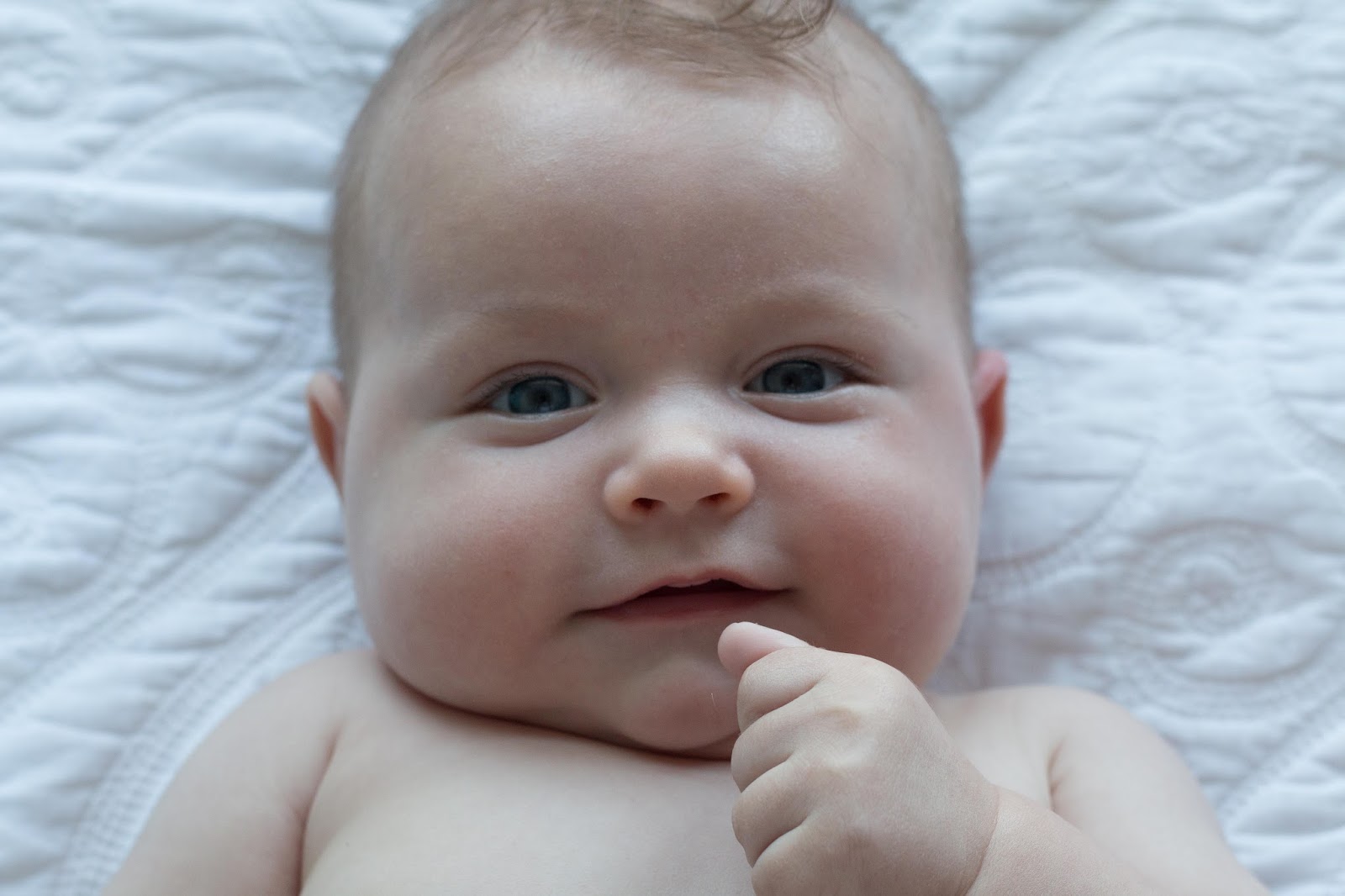 Anyhow, the lactation consultant confirmed that his latch was good, and my technique was fine, and that he was just a snacker. At this point, I was absolutely exhausted and almost to the point of switching to formula. I wanted an easier solution and wanted to sleep longer than an hour at night, I was tired of being sick and constantly battling plugged ducts. Although the constant nursing was a challenge, and I feared my daughter was becoming a Netflix addict, I felt like I could continue nursing him (knowing that it would eventually get better) if I could just figure out the plugged ducts and recurrent mastitis. The plugged ducts were the worst. I was doing everything in my power to avoid them (switching breasts every nursing session, wearing soft nursing bras, avoiding restrictive clothing, drinking plenty of fluids, massaging them before and during nursing;) but they persisted. I felt defeated, exhausted and sore all the time. I asked the lactation consultant if there was ANYTHING else I could try. Thankfully, she had a recommendation–lecithin, an all natural supplement that you can pick up at any pharmacy (it’s in the vitamins section.) I didn’t need a prescription or anything. I sent my husband out that day to pick it up.
I told myself that I wanted to make it until six weeks, when my mom, and my previous experience with my daughter, told me it would get easier. That gave me two weeks to give this lecithin therapy a try. If it didn’t get better I was probably going to start supplementing with formula. I started the prescribed dosage schedule for the lecithin (it starts off high and then tapers off over the course of two weeks.) Within two days of starting the lecithin my plugged ducts had resolved, and within four days I hadn’t had any new ones. This was the longest that I had gone without plugged ducts with my son and I felt amazing. I mean I was still extremely exhausted; but, without the plugged ducts I felt like a new woman. After two weeks without any plugged ducts I knew it was a game-changer. My son’s eating had steadied out a bit (he was still dreadful at night but he was stretching out during the day) and without any new plugs, I hadn’t had another bout of mastitis. 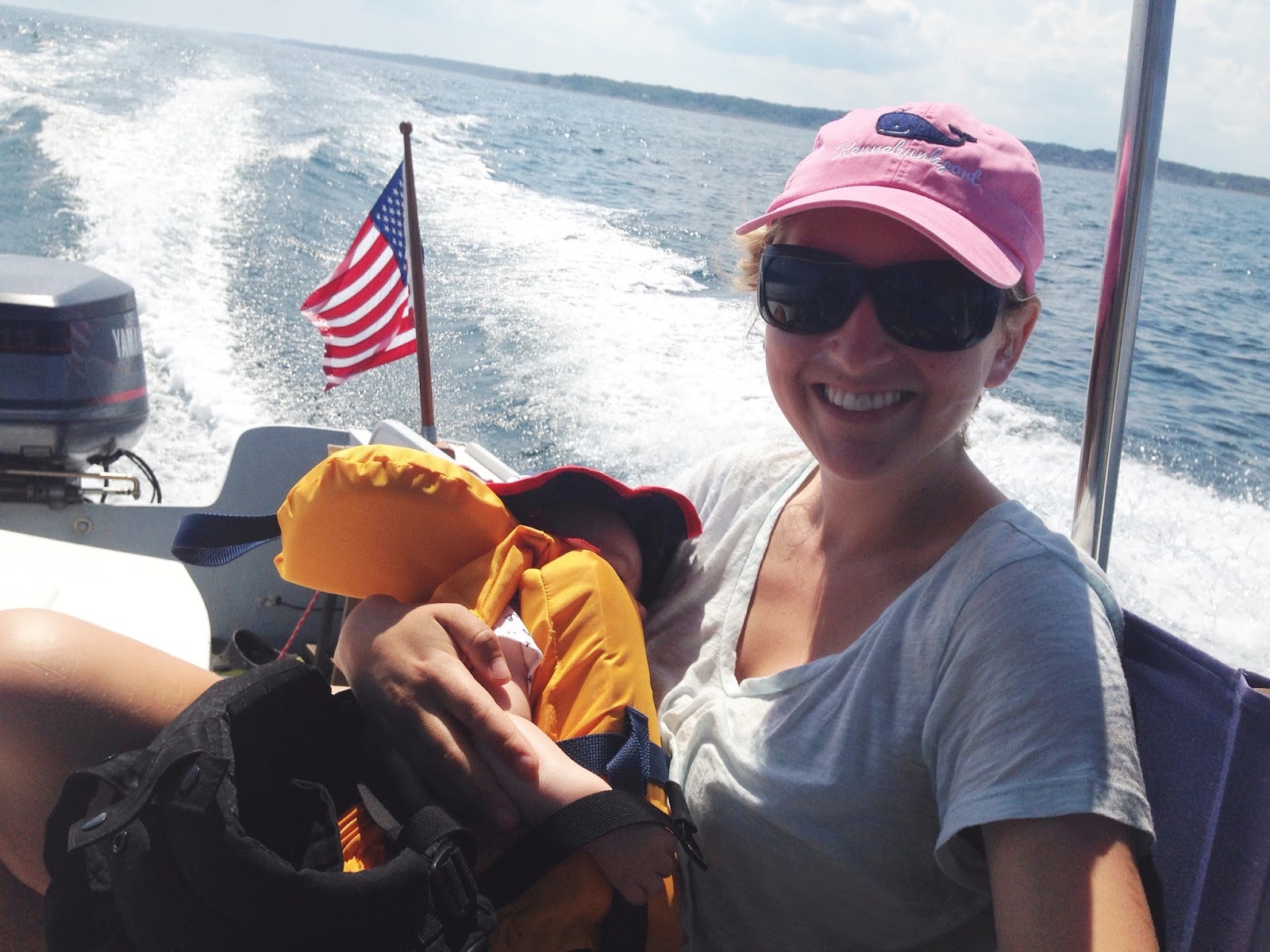 (after nursing Jack on the water in Maine)
So if you are having plugged ducts and are ready to give up, give lecithin a try after talking to your healthcare provider. I think that my milk is just too thick (or my ducts are too narrow) that coupled with my kids snacking habits was the perfect storm. Now at six months, I have only had one more plugged duct and that was when I forgot to take my lecithin for a couple days. It’s inexpensive and changed my life. I wish that I had known about it earlier.
Ask the experts! Go to a lactation consultant if you think you need a consultation! Call your child’s pediatrician and tell them that you are having problems with breastfeeding. They will give you a recommendation for a lactation consultant, and with our insurance and the Affordable Care Act, it was completely free. Breastfeeding has saved my family thousands of dollars for formula between the two kids and has been a wonderful experience. I feel so incredibly close to my babies when they are breastfeeding, and even get a little sad when they stop. Also get support from your friends and family, and health care providers. I was very fortunate to have my mom to talk to who breastfed me and my siblings, and my maternal grandmother who breastfed all six of her children (and who was taught by her mother who breastfed all TEN of her children). If you don’t have friends or family who have breastfed (I only had one friend who has children) talk to your ob/gyn (or midwife), your pediatrician, a doula, or a lactation consultant. These people know what they are talking about and have most likely seen it before. Even with the challenges I faced, I consider myself very lucky that I was able to breastfeed effectively. 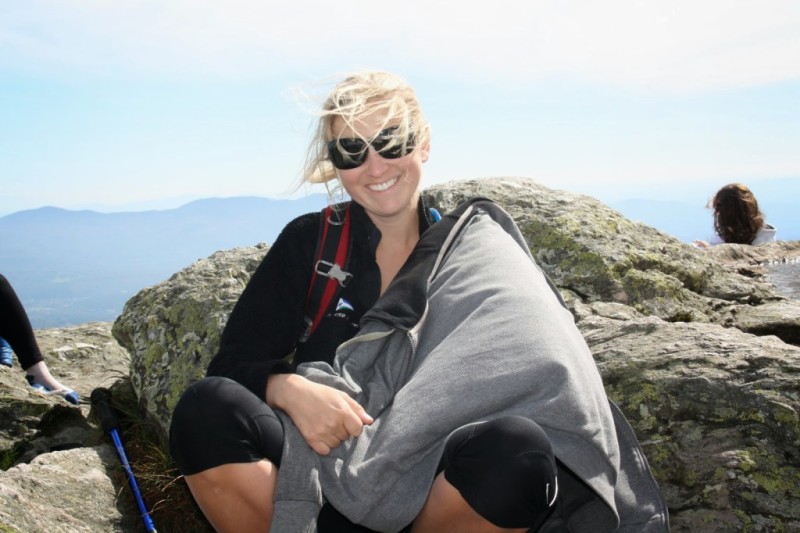 (nursing my daughter at the top of Mt. Mansfield two years ago)
I am so honored to participate in the Breastfeeding Diaries because it is such a wonderful resource for moms. By sharing our experiences we can learn so much and support each other. If you want to hear about my breastfeeding experience with my daughter (it includes talking about nursing while hiking a mountain!), and what other resources helped me, feel free to take a look over at All Things Big and Small, where I talk about motherhood, babies, cloth diapers, and budget-friendly home decor. Thank you so much Julie for having me!

One more from yesterday because I do what I want.

There’s nothing like being in a parade AND getti

Happy July from these three crazies!

Chicago, thanks for the memories!