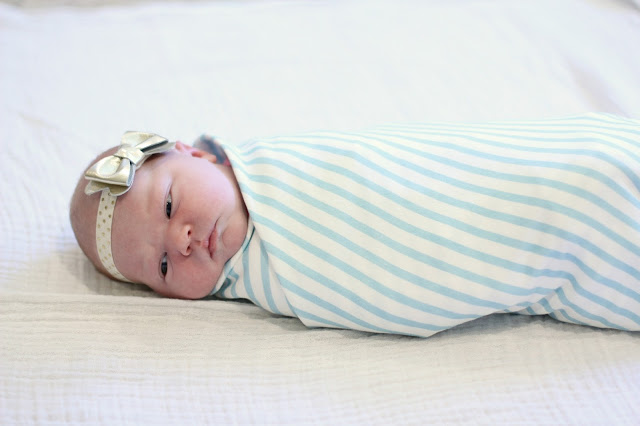 Thank you to everyone for all the well wishes on our new baby girl! We are over the moon excited to be a family of four, and still surprised that we have a girl! As most of you know, I had to have a c-section with Hudson because he was breech. I had my c-section scheduled for my exact due date at 11am….and my water broke on it’s own that day at 4am and I had him at 7am (so it’s safe to say if I had him vaginally he still would have been born on his due date). And Sadie was born on her due date too….so yeah, that has to be some kind of record right? Two babies born on their due dates?

Anyway, let’s get started.
I started having contractions on Tuesday, June 9th, that were all over the place. They would come one after another and then stop for an hour. And then start back up. They were not painful but uncomfortable enough that I knew something would happen soon. Then, that evening they started to be more frequent. Around 9pm I talked to my mom (who is a Clinical Nurse Specialist in labor and delivery and is my go-to expert on on this stuff) and she encouraged me to try and get some sleep, because chances were good I’d be in the hospital the next day! Well….I tried to sleep but the contractions were starting to get uncomfortable. Jon came upstairs around 11pm and noticed right away that things were happening fast….and I was in denial. He called my mom and said he thought we should go to the hospital. And for some reason I said it wasn’t time. I was so nervous about going there and then being sent home. Really, it was silly. Then around midnight I just knew….we had to go. I called the on call doctor and she said to come in. Luckily my sister-in-law was able to come over to watch Hudson and we headed to the hospital and met my mom there.
The nurse checked me and told me I was at 1 cm….and I might have said totally said “oh crap”….only one stinkin’ centimeter? You have got to be kidding me. They decided to monitor me and see if I made any progress before admitting me. Over the next two hours or so I tried everything….walking, bouncing on the birthing ball, standing….and I just couldn’t get comfortable. The contractions were coming fast and strong and I was pretty miserable. They put me in a whirlpool tub and Jon held my hand and adjusted the jets in the tub for an hour while I contracted more and more. When I got out I was at 3cm and finally was admitted.
And here’s where it starts to get fuzzy. The contractions were so strong and I just couldn’t get a break. I couldn’t focus, or answer questions….and I just felt like I was drowning. They offered to give me Stadol and I agreed….and let me just tell you this: It did NOTHING but make me feel groggy and tired. The pain was still there. I asked for an epidural and like magic the anesteglogist was there and they started prepping me. I’m not sure how long it all took but it felt like HOURS because I was in so much pain. But man, once that epidural was in I was a whole new person! I actually could look at people and answer questions. Thank God for epidurals.
Shortly after that my doctor came in (maybe around 7am?)…and I have never been so happy to see him in my life! He said I was at 4cm and broke my water….and said we would have a baby before noon. I totally didn’t believe him. Because I was having a VBAC, they had to monitor the baby’s heart rate really closely. At some point shortly after breaking my water everyone rushed in to my room….I guess Sadie’s heart rate slowed down big time and caused an alarm to sound. They moved me in several different positions and finally settled me on my right side, since that position seemed to help her heart rate return to normal. They also started monitoring baby internally with a monitor on her head. I was at 5cm by then and then they let me rest. I remember being worried that my progress would slow down big time since I wasn’t moving around at all, but honestly I was so tired from being up all night and from that stupid Stadol that I just closed my eyes and tried to sleep. At some point I sent my mom and Jon out so that they could get some breakfast before the excitement started. And of course, while they were gone I felt a sudden urge to push. And I ignored it. And then it happened again. And again. So I called my nurse and she checked me and said I as at 8 cm! Holy cow. It seemed to be going so fast! She paged my doctor and I nervously waited for Jon and my mom to return. It figures they would be gone right when things started happening, right?

Thankfully my mom and Jon came back and shortly after that and my doctor checked me again and said it was go time! They broke down the bed and got prepped….everything happened so fast. Side note: For the past few weeks my mom and I have been talking about if she should be in the room while I push or not. She doesn’t do patient care any more but has spent the majority of her career as a labor and delivery nurse. So she’s seen it all. When it was time to push I told her I wanted her to stay….and I’m so glad I did. Having her and Jon there to help motivate me really helped and comforted me.

So around 10 am I started pushing. And man, it was hard. My epidural was amazing so I didn’t feel any pain but could feel when contractions were coming….so I think that really helped me push. The big fear for women having a VBAC is that their uterus will rupture during labor. And the main sign of uterine rupture is a drop in baby’s heart rate….I had to stop pushing a few times so they could make sure Sadie’s heartbeat stabilized…..but the whole time I felt safe knowing that my mom, my doctor, my nurse, and my mom’s friend Becky (who is also a nurse) were all watching out for me and my baby. After less than an hour of pushing Sadie Mae was born at 10:57 a.m.! My doctor placed her on my chest right away and told Jon to tell me what it was….when he said “it’s a girl!” I think we were both in shock. Not only did I just push a baby out of my body but it was a girl baby! I am SO glad we waited to find out the gender. It was such a fun and thrilling surprise! 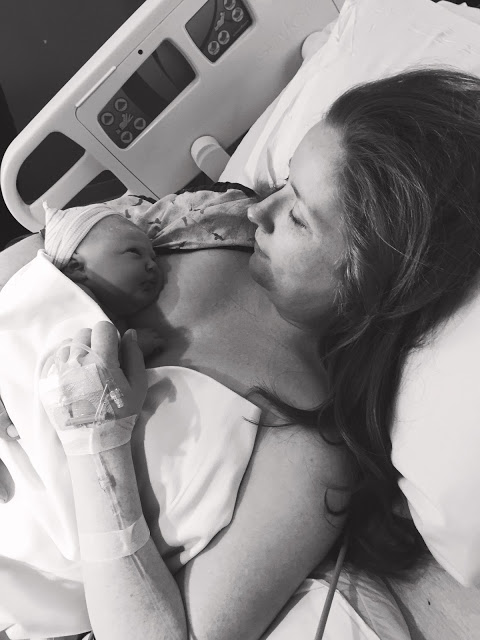 I couldn’t stop staring at her and was just in awe of what happened. Sadie got cleaned up a little bit while on my chest and then immediately started rooting around and wanting to breastfeed. She’s a breastfeeding champ, just like her brother! After an hour or so they weighed and measured her and we were all shocked again that she was 9 lbs 1 oz and 21 inches long. Holy cow! I pushed a 9 pound baby out of my body. Let me say that again. I PUSHED A 9 POUND BABY OUT OF MY BODY. Dang, I still can’t believe it….but I have the second degree tear on my lady parts to prove it. 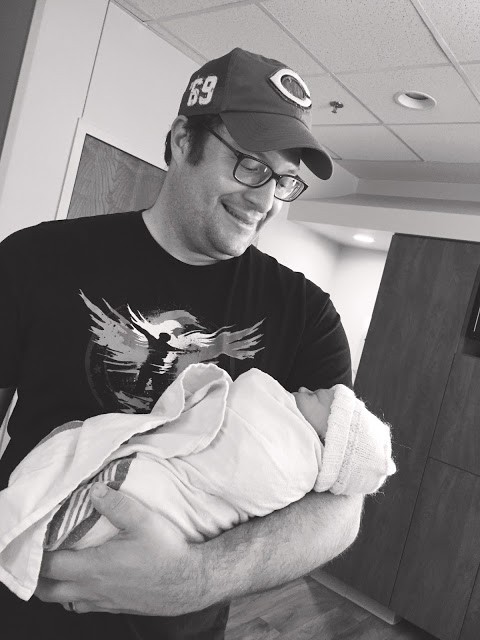 Of course, everyone wanted to know what her name was….and I said “I don’t know!” Jon pulled out our list of 5 girl names and 7 boy names and we just started crossing some off…..she just looked like a Sadie to me and Jon agreed! Picking her name in that moment was so much easier than narrowing our list down to 5 names! 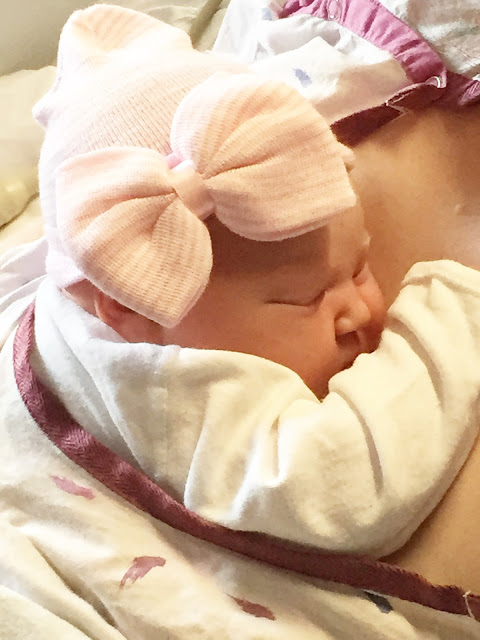 I am so glad I decided to have a VBAC! My recovery this time around has been so much easier and we were able to go home after just one night in the hospital. I know a lot of you have VBAC questions so I’m planning a post dedicated to my experience with a c-section vs. a VBAC just for you, so stay tuned!

« Snacks on the Go with Oreo 2-Pack
The Breastfeeding Diaries: Stasia from Our Life on a Budget »