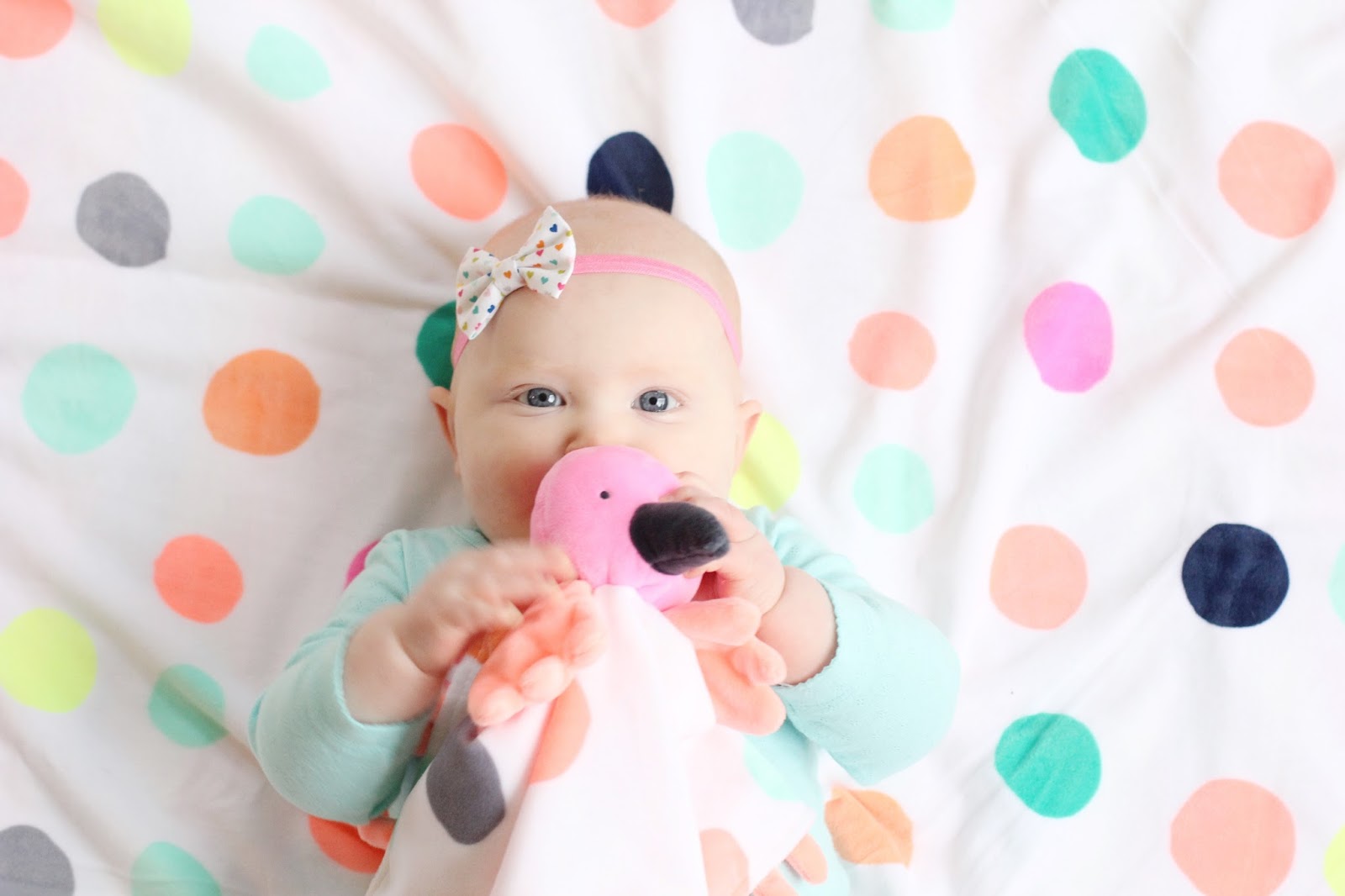 Our sweet little lady is 7 months old. Hudson’s first year seemed to fly by but this girl’s? It’s going at super sonic speed. Time needs to slow down…and so does Sadie. She’s on the go go go…..and we just can’t get enough of her. (You can find Sadie’s flamingo toy here and polkadot blanket here)
Sadie is all smiles and giggles and babbles. She loves to bounce in her jumperoo and is a non-stop chatter box. She charms the pants off of anyone she meets….that is, as long as mommy is holding her. If I’m not holding on to her tightly she’ll give every stranger major side-eye. And if she looses sight of me she’ll throw in a quivering lip and start crying. She’s a mama’s girl for sure and isn’t afraid to let everyone know it. For the first time this month she gave the ladies at the church nursery a hard time. Girlfriend likes her mama and simply will not stand to be apart. Thankfully she still does great with her grandparents and with daddy too of course. But it’s major heart eyes for mommy. Which obviously I LOVE.
Girlfriend weighs 20 pounds and is 27.8 inches tall (at her six month check up, which was last week because #secondchild). She’s right on track with her big brother at this age. 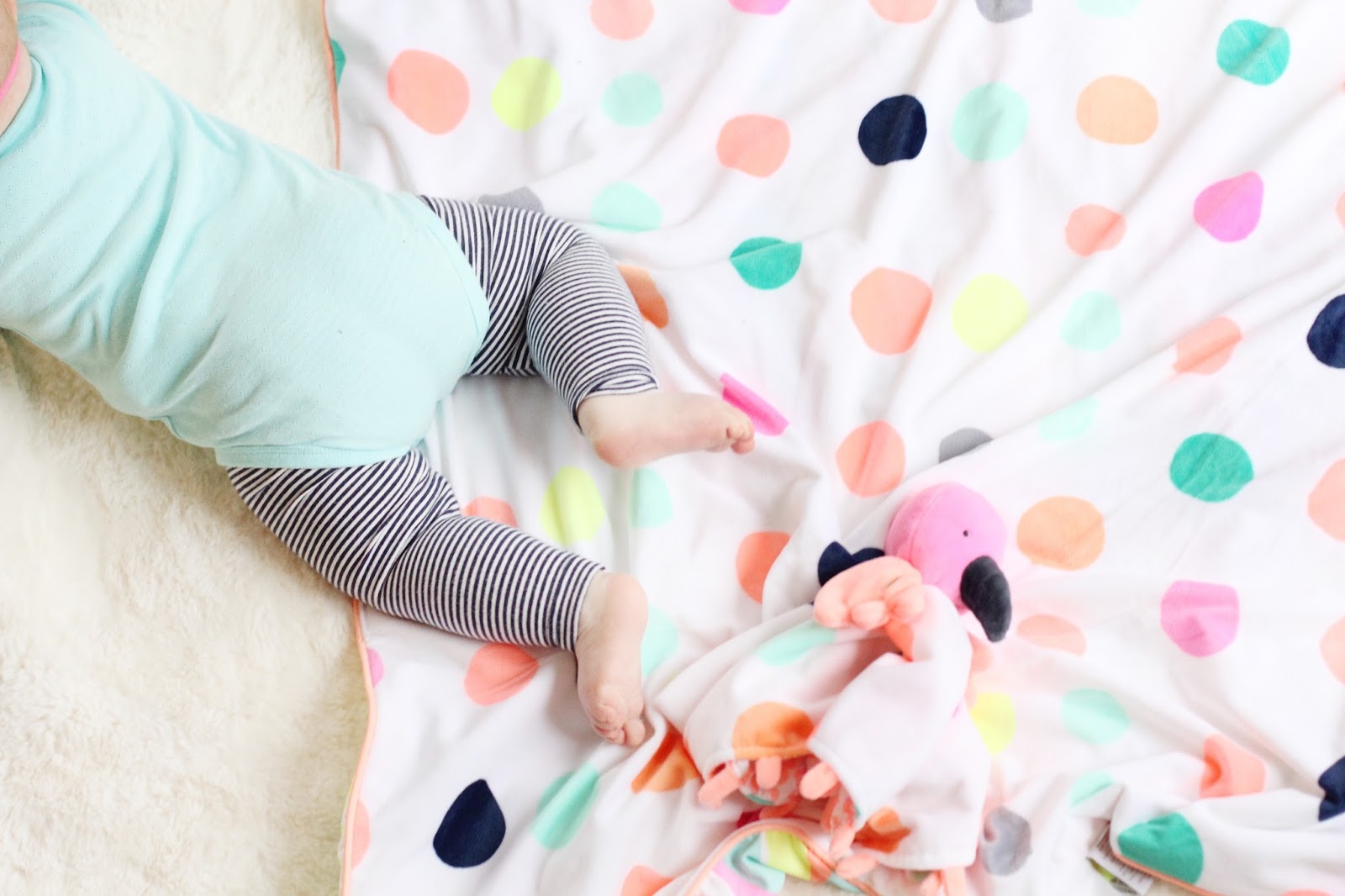 The biggest development this month is that Sadie is officially a girl on the move! She started crawling  this week and now is in to EVERYTHING. And she’s fast. Once she figured out how to get those legs and arms moving she was off! She totally beat her brother to this milestone. And she’s pretty determined to put every single one of Hudson’s (and Wrigley’s) toys in her mouth. I swear the only reason she’s crawling so expertly and so quickly is to keep up with big brother.
Also, she started clapping her hands. So. Stinkin’. Cute.
Sadie usually sleeps 7:30pm-7am and is up once (sometimes twice) in the night. But usually just once. On New Year’s Eve she decided to sleep through the night so I thought 2016 was off to a good start. But it hasn’t happened since. This month her naps have improved a ton….it’s still not perfect but we’re moving past the 20 minute cat-nap. On a good day she’ll nap an hour and a half in the morning and another hour and a half in the afternoon. But a lot of the time we are on the go so she just naps in the car. And sometimes she take 3 shorter naps. She likes to keep me on my toes. 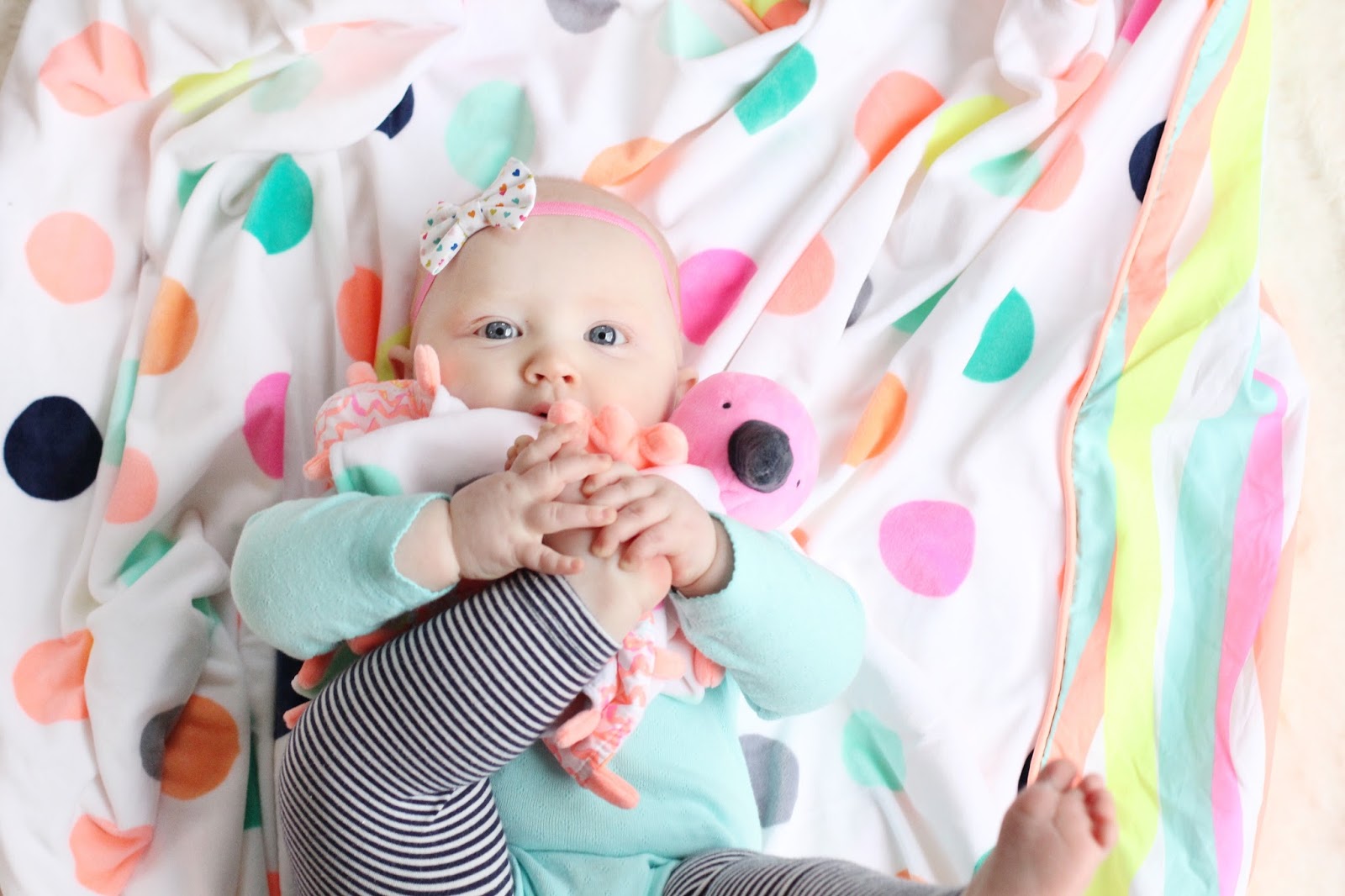 And speaking of toes….hers are always in her mouth. It’s impossible to get a photo of her these days because she stays still for a few seconds and then is rolling away from me as quickly as she can. As for her diet, she’s a breastmilk all the way kind of girl. She’ll eat a few bites of homemade baby food but so far only really like’s playing with the spoon. She’s had rice cereal, sweet potatoes, peas, bananas, and applesauce. I tossed a raspberry her way last night at dinner and she had fun smashing it and making a mess but didn’t take a single bite. I’m making her food just like I did with Hudson and it’s super easy. I use this and I love it.
Sadie has such a happy, bubbly personality and lights up a room. She’s got us all wrapped around her little finger and we wouldn’t have it any other way. What did we do before her? She’s the perfect addition to our family and we just love watching her grow!
*affiliate links used