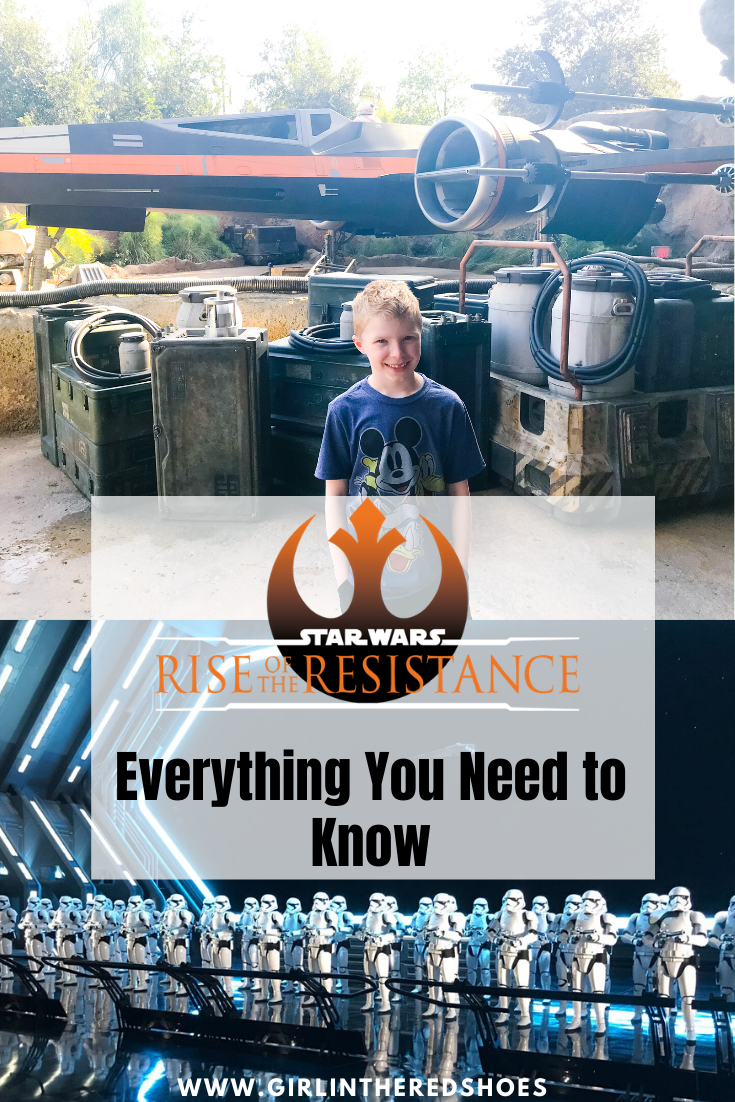 Okay, let’s talk about the Disneyland’s NEW ride, Rise of the Resistance, located in the new land at Disneyland called Galaxy’s Edge. Today I’m sharing my tips for scoring a ROTR Boarding Pass, tips for riding the attraction, and my thoughts on riding it with small children. Rise of the Resistance is a massive attraction with multiple ride experiences and is totally unlike ANYTHING you’ve ever experienced at Disneyland! My family all agreed it was mind-blowingly awesome!

The Resistance needs your help! Hidden in the forest outside Black Spire Outpost, the resistance is gathering recruits (you!)  for a secret mission. When your transport is captured by a First Order Star Destroyer filled with stormtroopers – and even Kylo Ren – you’re going to need all the help you can get. Rey, Finn, and even BB8 show up to assist you as you escape! 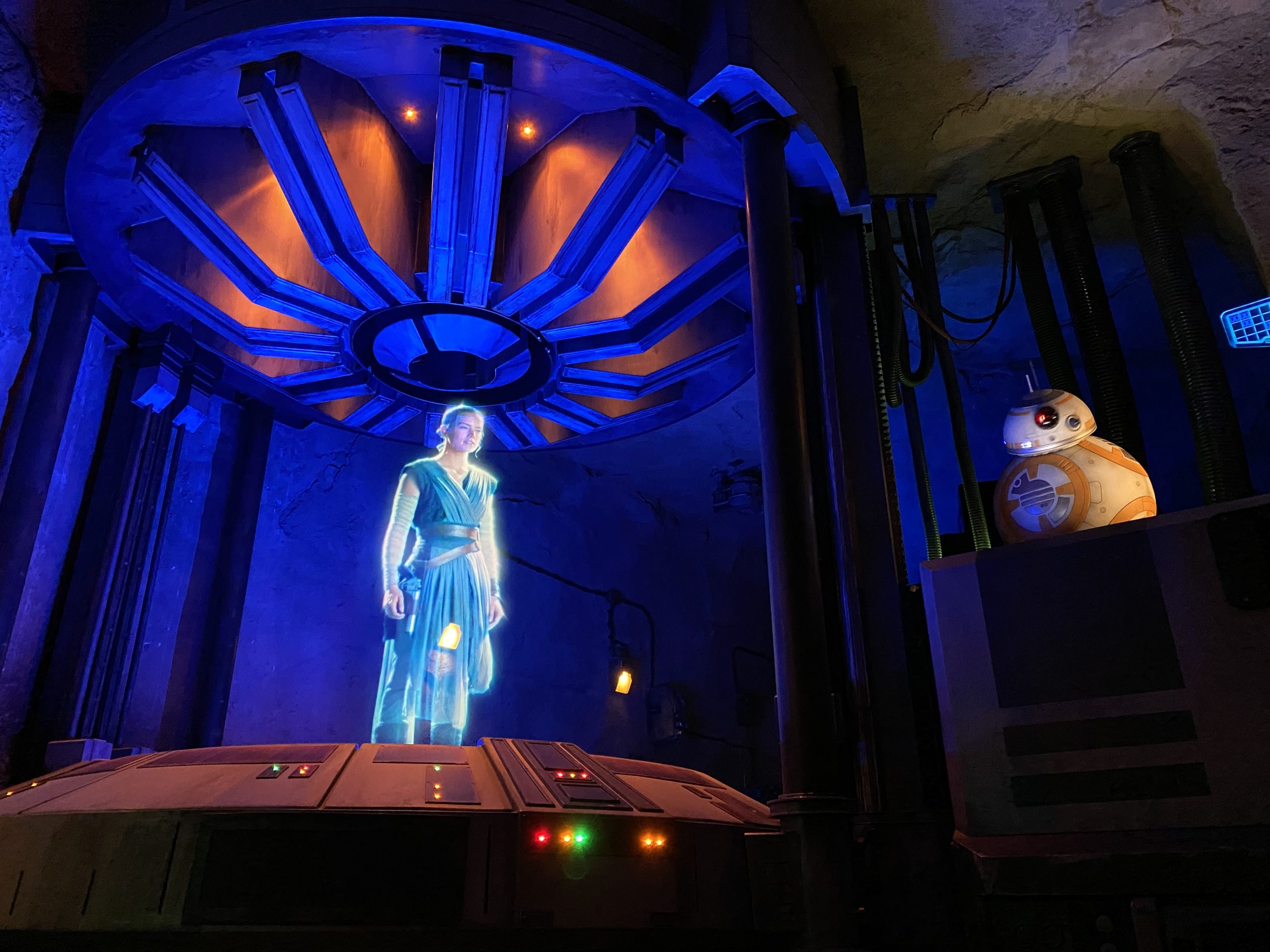 How to Get a Boarding Pass to ride Rise of the Resistance:

As of right now, the only way to ride the Rise of the Resistance attraction at Disneyland is to get a boarding pass…..meaning you can’t just walk up to it and stand in line. I’m not sure how long Disneyland will be implementing the boarding pass system, but most likely it will be for a while.

Here’s how you get one:

1. Download the Disneyland app in advance of your tip. This is a MUST. Familiarize yourself with the app, click on the different areas so you are comfortable navigating it, make sure you are signed in and know your password just in case you need to re-enter for any reason. I talk more about all the things you can do in the Disneyland app in this post.

2. Link your park tickets to your app. You can link multiple tickets in your app and name them for each member of your party. Note, if you don’t do this, you likely will not be riding in the same boarding group as the members of your party. If you have to do this while at the park, give yourself plenty of time before park opening as it takes a couple minutes.

3. Arrive early. The KEY to scoring a Rise of the Resistance boarding pass is to get scanned into Disneyland before park opening. Boarding passes become available virtually in the app the moment the park is officially opens, so if you are still in line waiting to be scanned in you will miss out on getting a boarding pass. Right now, and for the foreseeable future, passes are all claimed within 2 minutes of park opening. Time is of the essence!

The time that the park officially opens is the time that attractions start running….it is NOT the time you can get scanned into the park. Depending on the day and crowd level, Disneyland Cast Members begin scanning visitors into the park 30 minutes (or more) before official opening time. They allow you to walk down Main Street but have a rope up that blocks off the rest of the park. Getting scanned into the park before official opening is the only way to ensure you have a good chance of getting a boarding pass.

4. Once you are inside the park before official opening time, make sure your Disneyland app is ready to go. Disneyland WiFi is slow….and with so many people vying for a boarding pass it is bound to be even slower. So turn off your WiFi and just use your data. It is also helpful to turn off Bluetooth and exit out of any other apps. 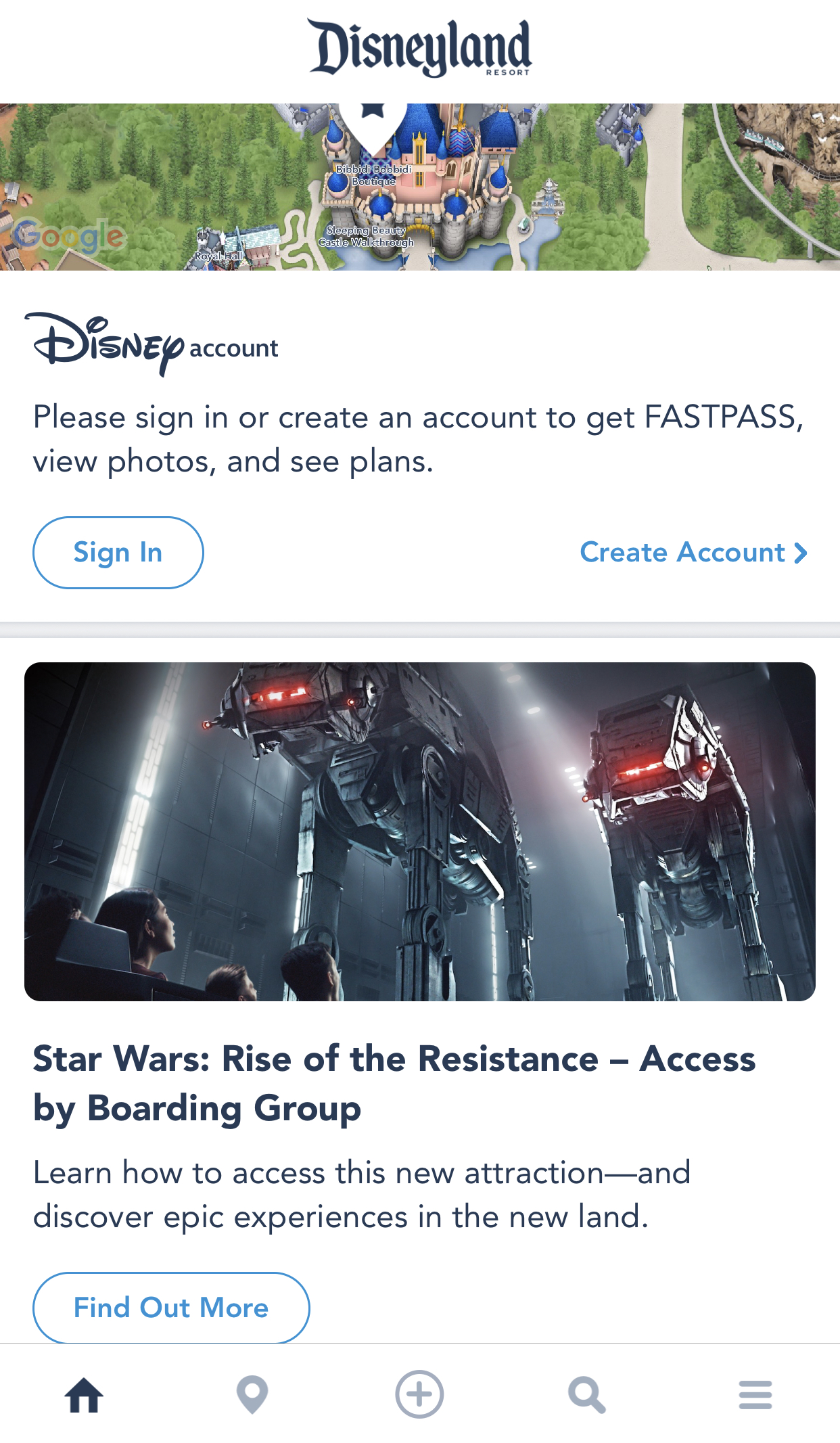 5. One minute before park opening, open up your Disneyland app and click on “find out more” as seen in the photo above.

and then as SOON AS it’s park opening time,  click “My Status”, then click “Join Boarding Group”…..OR whichever is highlighted/clickable.  You’ll then select the members of your party and then go! Have fast fingers here!!!! Then you’ll be assigned (hopefully!) a boarding group number. And you’ll hear people throughout the park start cheering.

6. Make sure your Notifications are turned on and keep an eye on the “My Status” part of the app as shown in the photos above. The app will alert you when it is your group’s turn to ride the attraction.

If you follow the above steps, this assures you have just as much of a chance as anyone in the park. Doesn’t matter if you camp out over night or just barely squeak in before opening, everyone has the same shot the very second Disneyland officially opens.

Once your boarding group is called you’ll have a window of time to make your way to the attraction. Usually it’s 1-2 hours. For reference, on day 1 we got group #95 and I was so disappointed since they were only guaranteed to call up to group #72 that day. But much to our surprise our group was called around 6:30 p.m. and we were THRILLED! On our second day at Disneyland we were group #24….but we weren’t called until 1:00 p.m. since the ride was down until about noon. So the lower group number you get, the better. Once your group is called, allow for the entire experience to be about 30-40 minutes, which includes time spent in the line que and time spent riding the attraction. There is a lot to see and do while you’re walking through the line and it is pretty cool! 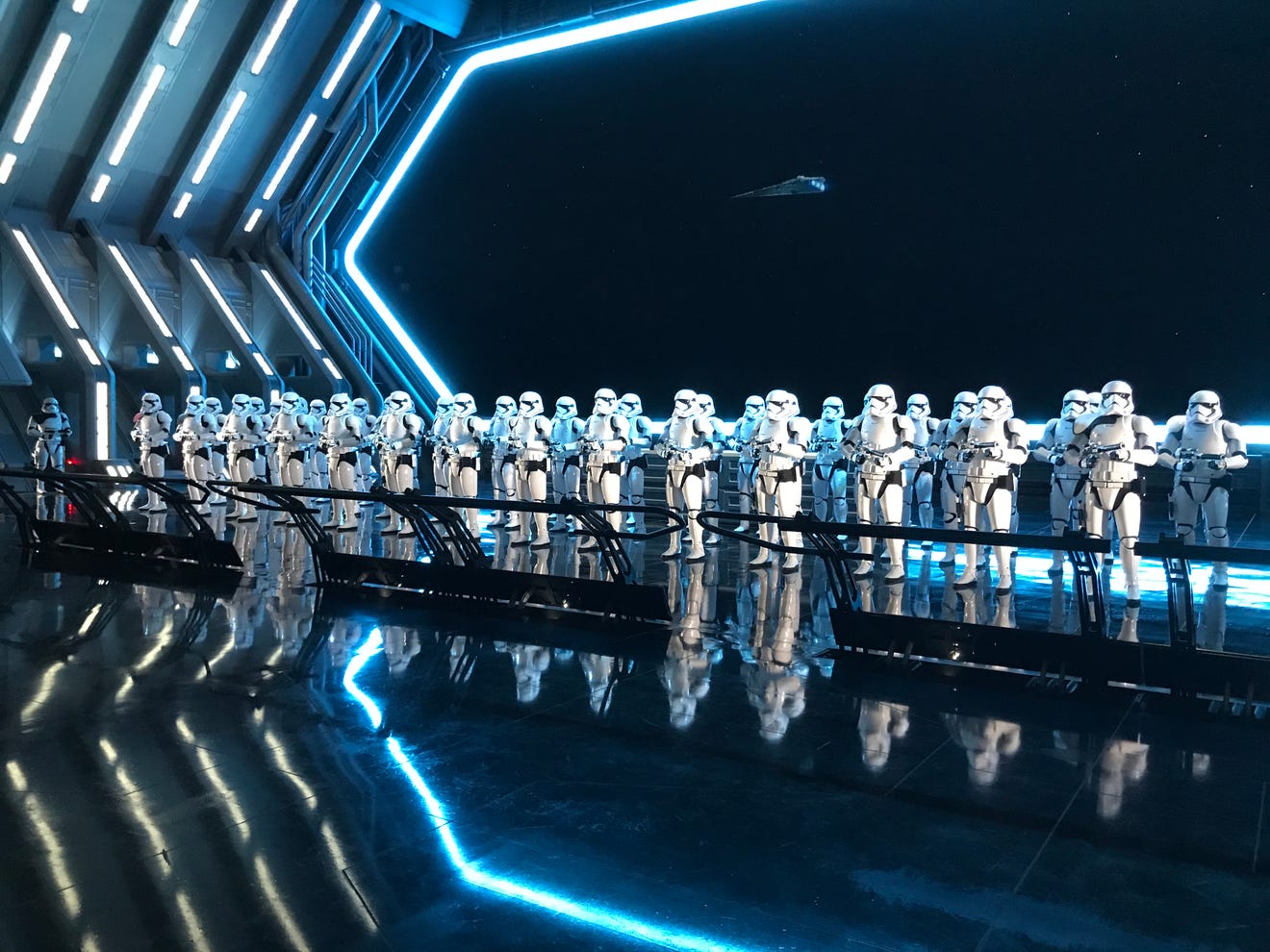 What to expect when you ride Rise of the Resistance:

(Warning, this paragraph contains a few spoilers.) The Rise of the Resistance is considered a “thrill ride” and there is a small drop, but it happens pretty quickly and is not too scary. The ride is overall pretty smooth and a lot less bumpy and jerky compared to Indiana Jones. The ride itself isn’t really scary, but the concept can be a little bit frightening for small children. After you’ve been taken captive by the First Order, you’ll interact with Cast Members in character as First Order Officers who will help you get loaded onto your prisoner transporter….this made Sadie, my 4.5 year old, a little bit nervous. She was a little intimidated by the First Order capturing us and kept asking if it was real or pretend. Thankfully some Resistance fighters show up to help you escape and she was SO happy to see them! Sadie also was a little startled by parts of the ride but at the end she was all smiles and asked to ride it again! The height requirement is 40” for this attraction, which I think is reasonable. 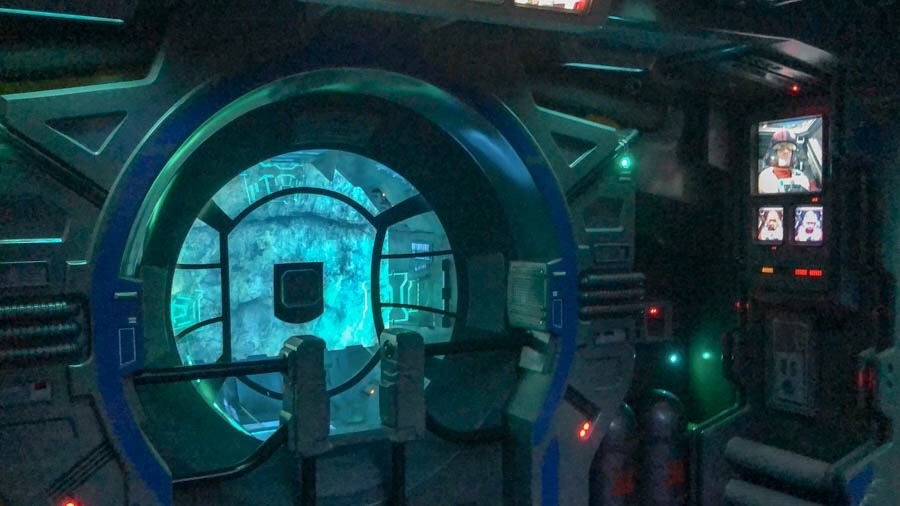 1. When you first enter your transport, head to the back (it will look like the photo above). It seems like most people head to the front where Lieutenant Bek is commanding the ship and is speaking to you ….but the back is where you can see all the action! You see your transport “take off” and then you see the First Order Show up. It is really cool! Be sure to hold on because it does move you around a bit!

2. If you are riding with kids and it’s time to get on the attraction, have the kids sit in the outside seats and adults sit in the middle seats of your assigned row. A Resistance droid is “driving” your escape vehicle and it may be hard for little kids to see over his head. Each escape vehicle seats 8 people, 4 in the front row and 4 in the back. You will be assigned a color by the First Order Cast Members which will determine where you sit. We sat in the front each time. There isn’t a bad seat.

Our family gives this ride major thumbs up! It has quickly become our most favorite attraction! Have you had a chance to ride Rise of the Resistance? I’d love to hear your thoughts!

« Disneyland with Little Kids: 14 Things You Need to Know Before You Go
4 Reasons You Should Stay at the Howard Johnson When Visiting Disneyland »