Day 1: As previously posted, my sweet chubby little kitty, Pancake, recently (er, well it has been a over a month actually) earned the nickname the Poop Monster. Anyway, unfortunately for me, he has not made much progress towards pooping in the litter box. Thus, I came up with the idea of the Poop Project. It basically involved me moving the litter box out of the bathroom and into the hallway just outside of the bathroom. I think the Poop Monster actually enjoyed pooping on the bathroom floor, so I thought that if I possibly moved the box and locked him out of the bathroom altogether, he might not have enough guts to poop on the carpet in the hallway….at least that is what I am hoping will happen! So far, so good….although there was much confusion about the movement of said litter box, I think my two orange monsters are getting used to the idea….we’ll see what happens. 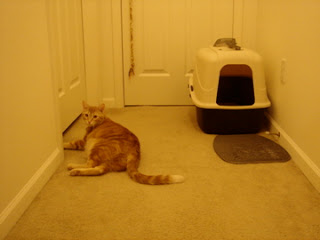 The new location of the litter box and the Poop Monster
trying to get into the now off limits bathroom. 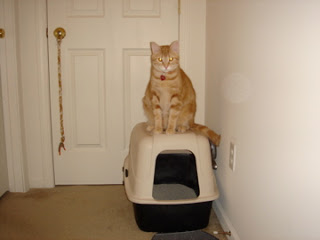 Hmmm…..well that is a start, I guess. 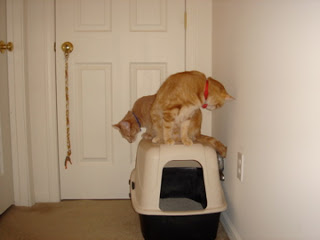 Henry getting in on the action, as usual. 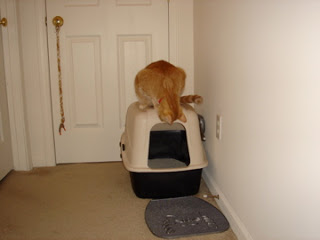 He’s totally thinking about it…. 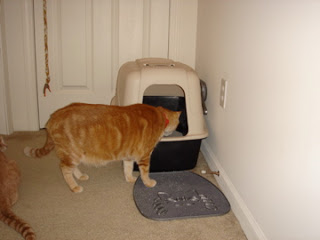 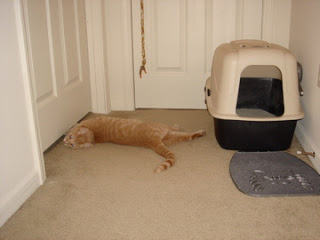 Henry trying to break into the bathroom…..my kitties sure hate
it when a door is closed on them. 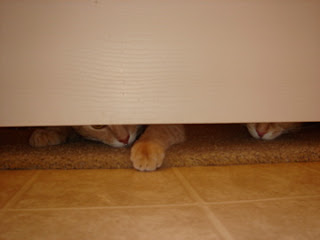 I took this from inside the bathroom….their cute little faces under the door just crack me up.
Poor little guys are going through bathroom withdrawls.