How was your Memorial Day weekend? Mine was nice….we didn’t do much but it was nice all the same. We did, however, get our engagement photos taken (pics coming soon!), see Indiana Jones (eh), go shopping (I didn’t buy anything! But Jon got two pairs of jeans and a pair of shorts….why do guys have it so easy?), oh and I did get something from Bath and Body Works…I had a coupon for a free Bigelow product with any purchase…which was used not on me but on Jon for some cologne…I am such a nice fiance aren’t I?

Anyway, the big excitement around here was that Jon bought a little portable propane grill. So guess what we did? Sat outside, had some Coronas, and grilled! 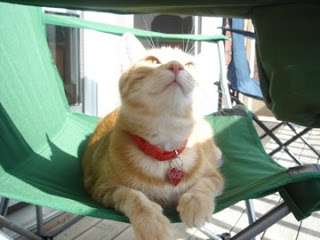 Pancake quickly discovered the comfy chairs we brought outside. 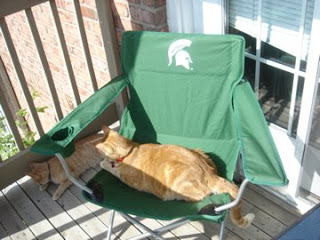 His favorite is Jon’s Sparty chair. 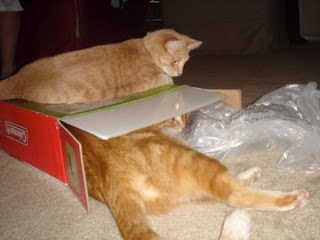 Of course the boys had to play in and on top of the box the grill came in. 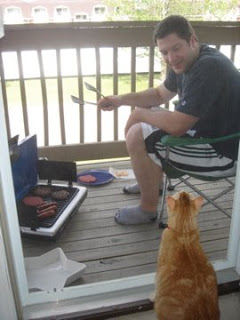 Pancake was really curious about what Jon was doing outside. I was worried he would burn is paw (a-la Michael Scott) so I made him stay inside with me while Jon grilled the yummy burgers and brats. 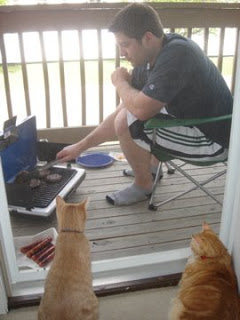 Henry wanted in on the action too. 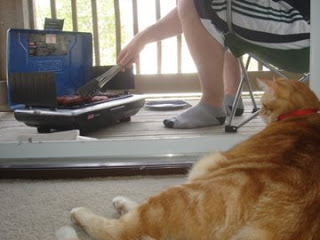 Look at my little fatty eyeing the food…poor guy.