I’m almost done answering all of your questions…and man, some of them are tough! You can read part 1 here and part 2 here.
Coco asked what is something I had to let go of when I became a mom. Oh my….let’s see….so many things. My hair and makeup routine is way simpler than it used to be, I also watch so much less television than I used to, we hardly ever go out to eat, I don’t cook fancy meals (not that I did before, but they are pretty basic now), and I’m sure lots of other things have changed. It’s hard to remember life before Hudson! What did we do with our time???? But I can say with 100% confidence that it is all worth it. 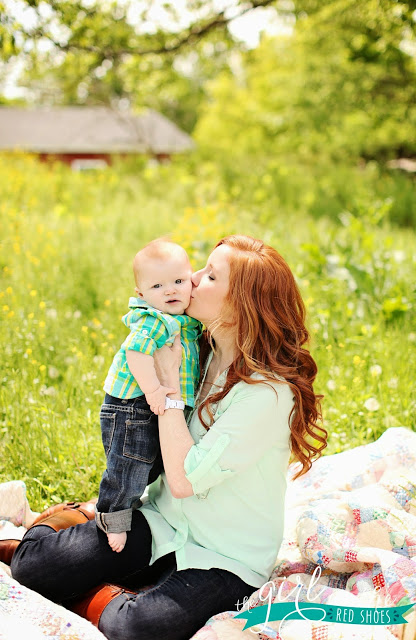 Whitney asked a bunch of scheduling questions (which I still promise to write a post on that…hopefully next week!) but also what our weekends look like and if we go out a lot and see friends. My answer to this may sound kind of sad, but the answer is no. No, we don’t go out a lot nor do we see friends frequently. Since my husband and I work full time the weekends are our only time together as a family….and that time is sacred. Now, we do occasionally go out (we do have a life!) with friends for dinner or we get together with friends that have little kids too. But usually it’s just us. It’s a lot easier to go out now that I’m done breastfeeding. But, since moving to Michigan I’ve had a hard time finding a group of girlfriends. I have a few good friends out here but I don’t have the group that I’m used to from high school or college. I’m pretty independent so sometimes it’s hard for me to step out of my comfort zone and meet new people…I need to change that asap….one of my goals for this year is to get more involved in our church…hopefully I can make my own group of friends that way! My husband is the opposite of me and has lots of friends from college (he went to school in the town where we live now) and has lots of work friends….some of whom I’ve claimed as my own!
Anonymous is a working mama and wants to know how I deal with the guilt of leaving my baby when I go to work. Hmm….lots of wine? This one is tough. Most days it’s really hard to leave Hudson and go to work…especially if he is upset. There is nothing harder than walking away from your baby when he is crying and is reaching his arms out to you. I’ve walked to my car and burst in to tears several times. It gets easier, but seeing your baby upset is so so so hard. I’ve gotten in to the habit of spying on Hudson through the window at
daycare once I leave. He is usually only upset for less than 30 seconds,
and then starts to play with all the toys. And usually he doesn’t have a problem with me leaving, which makes it so much easier. Often when I pick Hudson up
at the end of the day he is having so much fun he doesn’t want to leave. So really, I
shouldn’t feel guilty at all. I guess I deal with the guilt by making the time that I do get to spend with Hudson count. Some days when I pick him up from daycare he just wants to be held all evening until it’s time for bed. It’s not fun to try to make dinner while holding a clingy toddler but he just wants his mama….and I’m not going to deny him that! 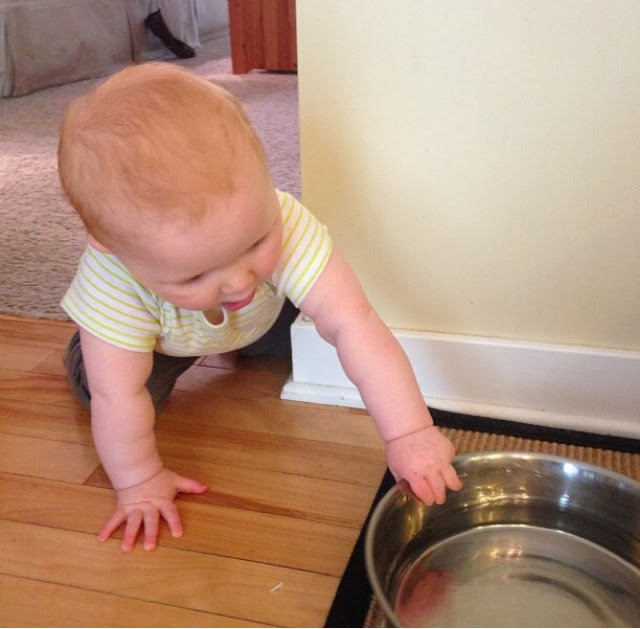 Anonymous also wants to know how I keep Hudson from eating our dog’s food and spilling his water. Well, the dog’s food and/or water is still spilled on occasion in our house, which when you have a busy toddler like do, that’s pretty good. I moved Wrigley’s water and food to a spot that gets less traffic, but is still easily accessible to him. When Hudson first started showing interest in Wrigley’s food I would give him a firm “no” and re-direct him to something else. Over and over again. He now knows he is not supposed to mess with the do food, but he still does. So I guess I have zero advice on this topic, other than to be consistent. Usually Wrigley eats his food pretty quickly so it’s not a constant issue. Hudson LOVES to play with the water dish but thankfully he also knows it’s a “no” and for the most part leaves it alone. But we went through a stage for a few months when he was constantly sitting in the water or splashing it everywhere. Just know that it will happen and you will have to clean it up frequently….but once they learn it is a no-no, it will get better!

Tracy asked if when I first stopped pumping how it affected my milk supply. I talked a lot about weaning in part 2, but when I first started to eliminate pumping sessions my milk supply went down for sure. I used to be able to feel when my milk let down, but that feeling started to go away. It’s all about supply and demand. Towards the end Hudson did seem to not feel as satisfied at the breast at bedtime, probably because he wasn’t getting as much milk as he was used to…..so I just started offering him a small bottle right before nursing and that seemed to do the trick!

« Hudson’s Kitchen: Before and After
The Breastfeeding Diaries: Kelly from Oh Miss Noelle »