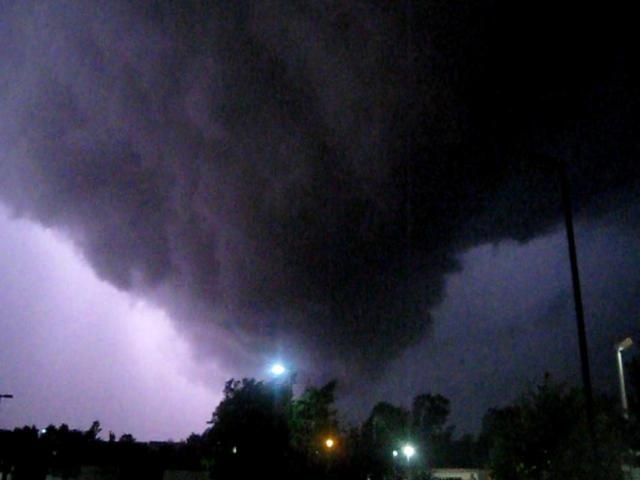 Oh. My. Word. Last night was scary. At about 1:00 a.m. we were suddenly woken up by a loud tornado warning alarm. I said to the husband “is that the tornado alarm???? We need to get in the basement!”. So we grabbed Henry, Pancake, Wrigley, and two flashlights and ran downstairs. Y’all, I was terrified. I’ve never ever heard those tornado alarms go off (other than just a drill). It was such a shock because we had no idea it was coming…it wasn’t even raining outside.
We sat in the basement for a few minutes and then the alarm stopped. Relieved, we decided to be brave and go upstairs so that Wrigley could take care of his business. Then of course we turned on the news only to see angry red warning signs all over the weather map for our area. The weathermen told us to get back in the basement asap and stay away from any windows. And then the alarm went off again. And it started to pour down rain. And thunder and lightning. So we high tailed it back down to our shelter.
Growing up in California means that I’ve lived through several earthquakes. And let me tell you, tornados are much more terrifying. At least with earthquakes you shake for 20 seconds and then it’s over. I’ve even slept through one. With an earthquake you don’t have to sit for an hour in terror wondering when the tornado will strike. I could never live somewhere like Oklahoma where this happens all the time!
Needless to say, a tornado didn’t touch down by us, and we were back in bed an hour later.
Between prayers for safety I realized that we were so not prepared for a tornado. We didn’t have water, or extra flashlights, a first aid kit, or a radio. By chance we did have some food in the basement (a healthy selection of chips, pudding, and V8 juice). So of course I now have a list of stuff to buy should this ever happen again.
And that picture of the angry mass of clouds above was taken by our local news station Wood TV8.
Has anyone ever been in a tornado? What was it like?