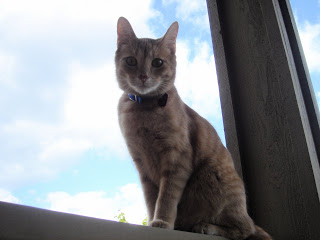 On Thursday I lost Henry. Then I found him. 25 minutes later. It was an awful, heart wrenching 25 minutes of agony…and tears…many many tears. I left the door to the balcony open so that the boys could go outside…because they LOVE being outside. After awhile I left the living room to get ready to go to the gym. When I was all set, I went to get the boys to come inside and close the balcony door. Pancake was with me, but Henry was no where to be found. I shrugged it off and started to look for him. Henry has a habit of crawling into places when you are not looking. I checked the bathroom, the closets, the laundry room, under the sink, in the refrigerator (yes, I am a horrible mom and once shut him in the fridge when he snuck in there without me knowing…don’t call animal protective services on me, it was only for like 2 minutes). I couldn’t find him anywhere. I started to panic big time. I called his name, looked under the bed…no Henry. So I checked all his spots again. Usually, when I accidentally lock Henry in somewhere, like the fridge or under the sink, Pancake gives me a heads up by staring strangely at the shut door…so I know that Henry is trapped. But on Thursday, Pancake was just as confused as I was. The only place he could be was outside. I quickly opened the balcony door and scanned the ground for him. No Henry. I called his name. No Henry. By this time, I was majorly freaking out….he jumped. Oh no.

So I ran outside. I walked around my apartment complex twice. I called his name. I looked under every single car and bush and tree. No Henry. As the tears started to fall down my face, I decided to go back inside and call Jon. He would know what to do. He would have to drive an hour to GR to help me look for him. By the time I reached my apartment, I was sobbing. I couldn’t believe what a horrible person I was for loosing my kitty. How was I going to find him? Sure, he has a collar with my name and phone number on it, but I doubt that he would let a stranger pick him up. And it wasn’t like he could just come back home…I live on the second floor…how was he going to let me know when he came back? When I came inside, Pancake ran to me…obviously missing his buddy…another sign that he was lost. I called Jon 3 times and he didn’t answer. I was absolutely sobbing at this point. I decided to call Jon’s sister, Erin. If anyone would help me look for Henry, Erin would. She loves him and he loves her. But, as I was picking up my phone, something made me remember that I forgot to check my dresser. I had opened it to get out my gym clothes. And maybe, just maybe Henry was in there? So I said a quick prayer and opened the drawer. Sure enough, I saw a fuzzy orange paw followed by a squished Henry!!! I found him! He wasn’t naughty and didn’t jump off the balcony! He just crawled in my dresser when I wasn’t looking. I screamed and cried and held him tight. He didn’t want any part of it.

So that was the story of how I lost and found Henry. You never know where the little monster might be. Oh, and Pancake was relieved too.