Our little man is already 4 months old….where has the time gone??? 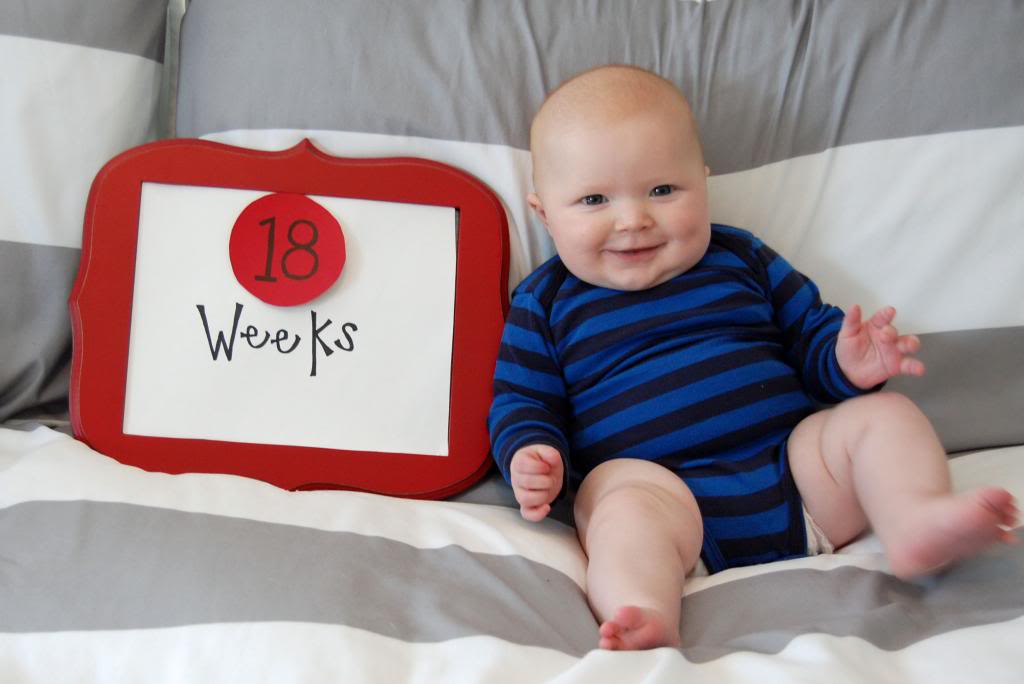 Height and Weight: Hudson weighs 18 pounds 1 ounce and is 25 inches long. We have a little chunker on our hands!

Health: We’ve had a rough few weeks. Our poor little guy his been sick most of this month and had a bad cough the days leading up to Christmas. He would cough so hard sometimes that it would trigger his gag reflex and he would throw up his entire feeding. We took him to the doctor the day after Christmas and he said just to watch his breathing….but that Saturday he seemed and worse and would wake up screaming so we took him back. Poor little guy had his first ear infection! Luckily after some ear drops and antibiotics he is feeling much better! 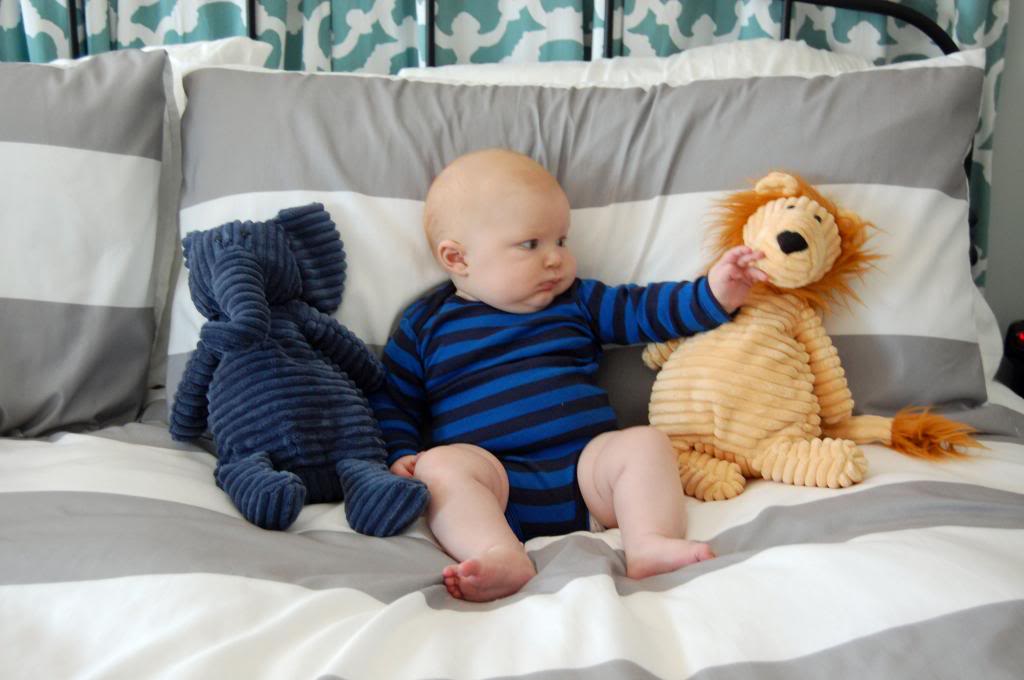 Sleep: Hudson is a pretty good sleeper. Before getting sick he was sleeping 8-10 hour stretches at a time. Now he often wakes up coughing once at night but still manages to sleep between 6 and 9 hours at a time. I know some mommies would love for their little one to sleep that long, so I can’t complain! I usually don’t mind a middle of the night feeding…he is so snuggly and sweet when he’s sleepy. We usually do a bath around 6:00pm, then I feed him and rock him to sleep and put him to bed by 7:00pm. I’m also trying to transition him out of being swaddled. Right now he has one arm in and one arm out….I’m waiting until he’s healthy to try both arms out.

Even though he sleeps pretty well at night he is a horrible napper! Sometimes I can get two great one hour naps out of him and sometimes he only naps for 20 minutes! 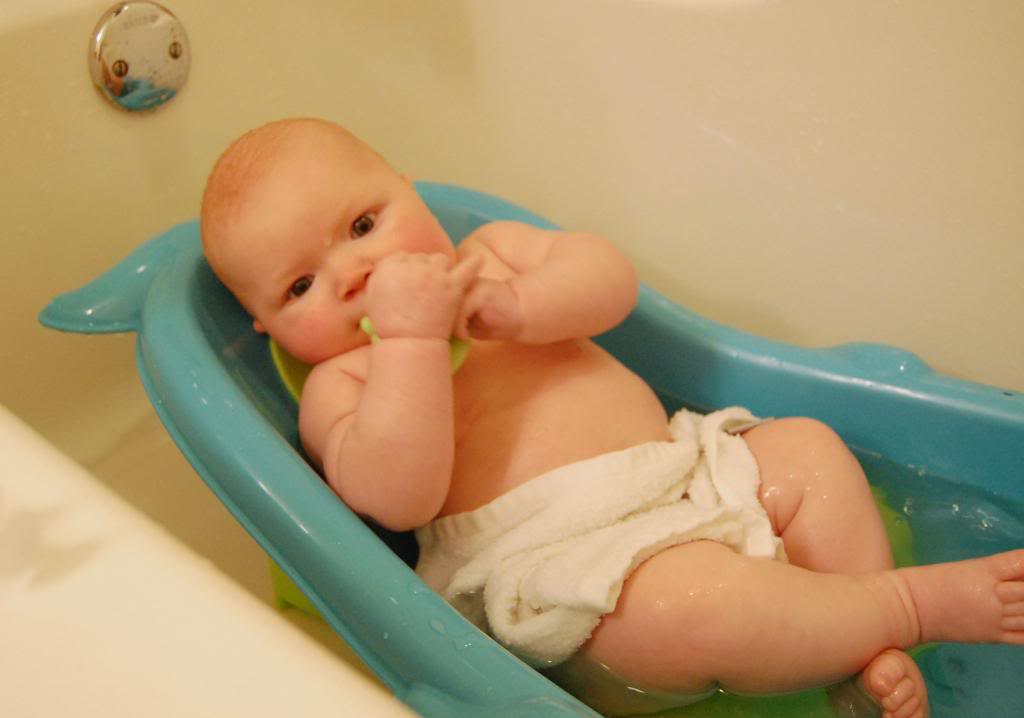 Diet: 100% breast milk.We are going to exclusively breastfeed (which means no solid food) for the first six months of life, per the recommendation of the American Academy of Pediatrics. I know a lot of new moms (and soon to be moms) have lots of questions about breastfeeding. I’m working on a series of posts about my routine as well as what I did to establish my supply…stay tuned! 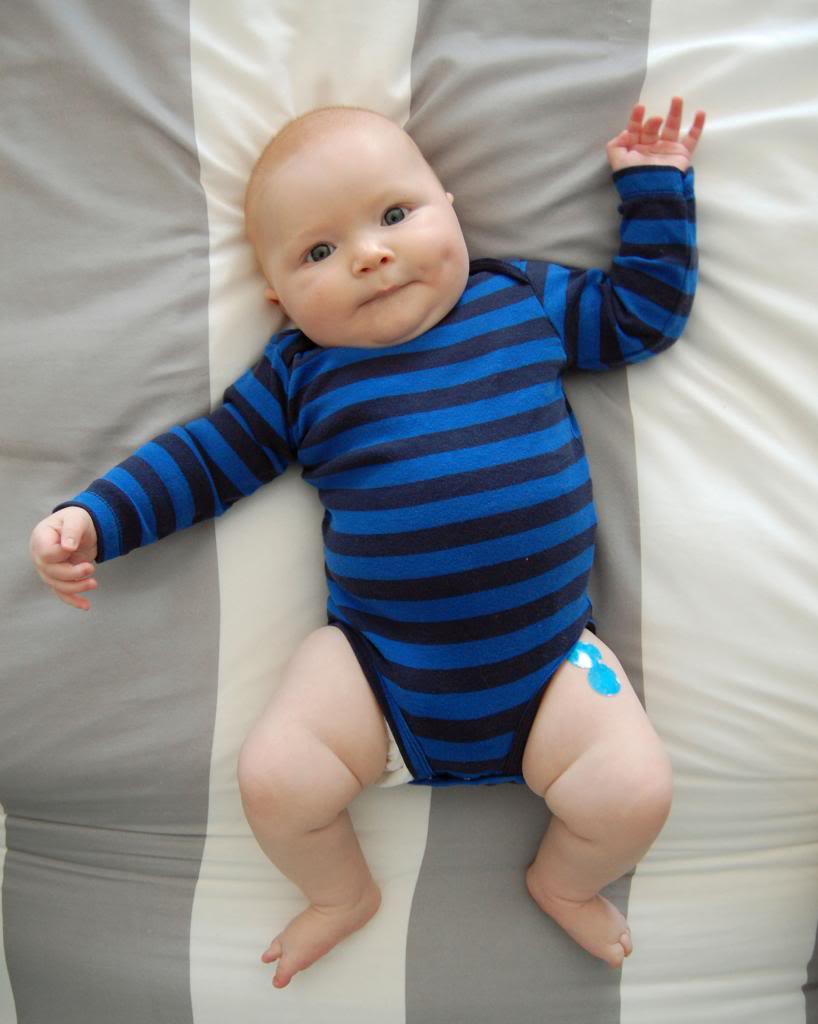 Clothes: Hudson is wearing size 6 months in clothing and pjs. We still have a few size 2 diapers left that we are squeezing him in to…once they are gone he’ll be a size 3. 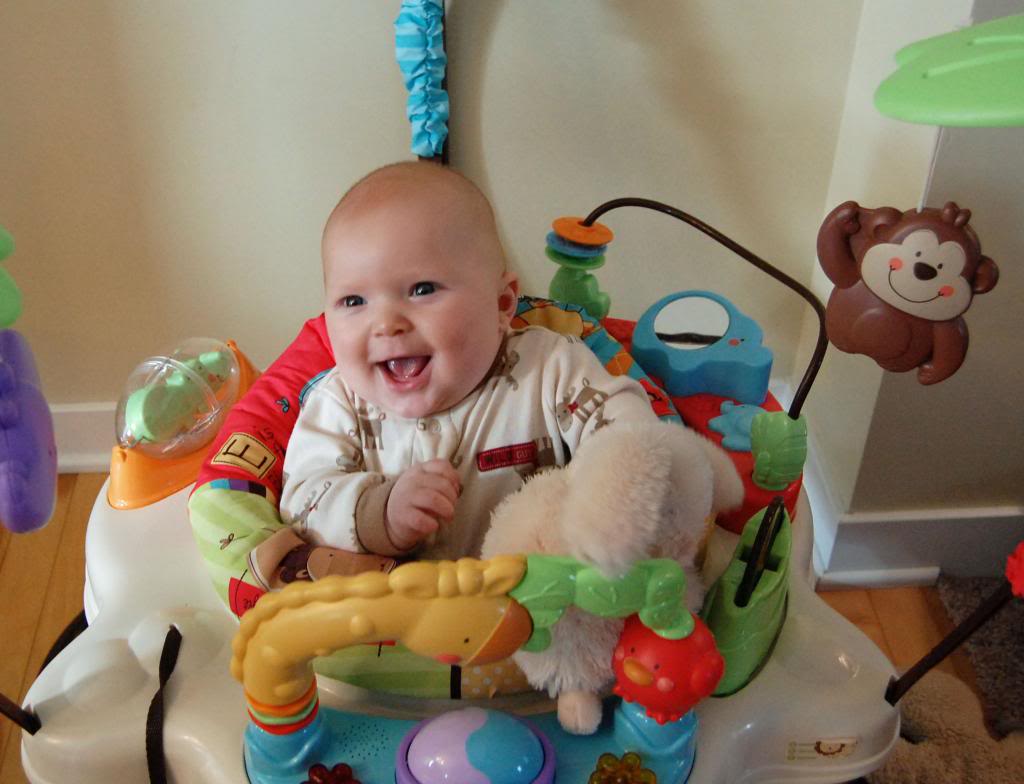 Baby Gear Love:  Hudson LOVES his Jumperoo. It has been so fun to watch him bounce around. It also entertains him for a good 20 minutes which has helped me keep my sanity on some days! His new favorite toy is the Very Hungry Caterpillar. He just lights up when he sees it. 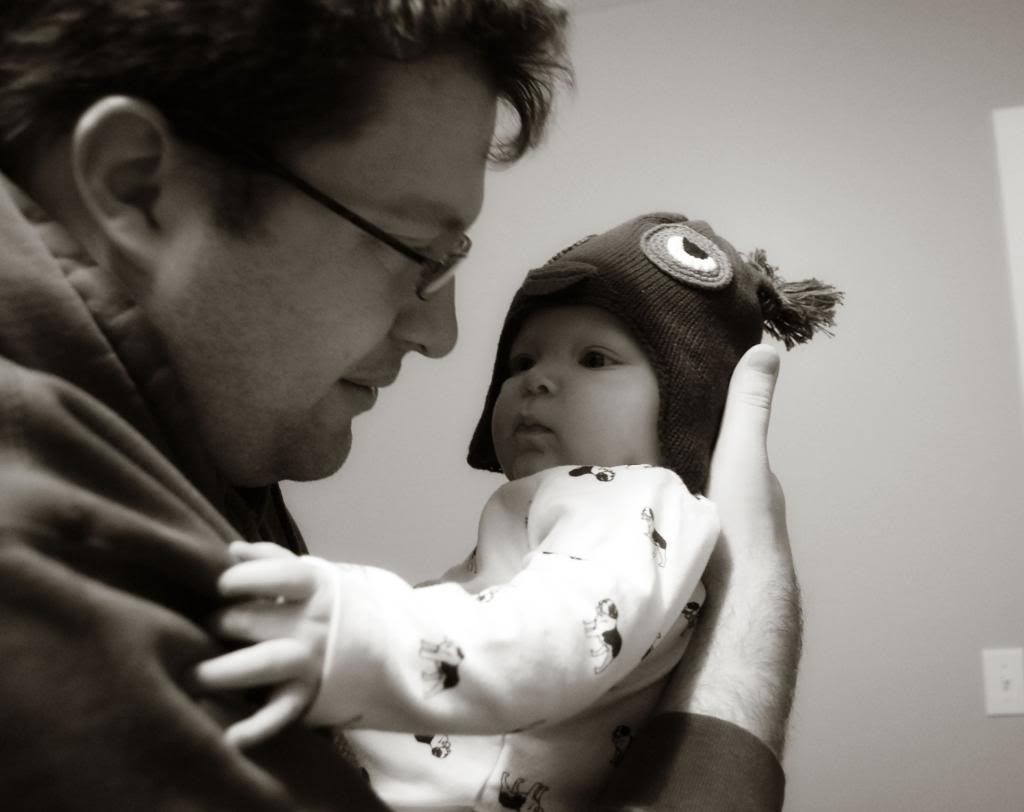 Crying: Hudson cries when he doesn’t feel well or when he’s hungry. We no longer have a crying “witching hour” before bedtime, which is amazing! 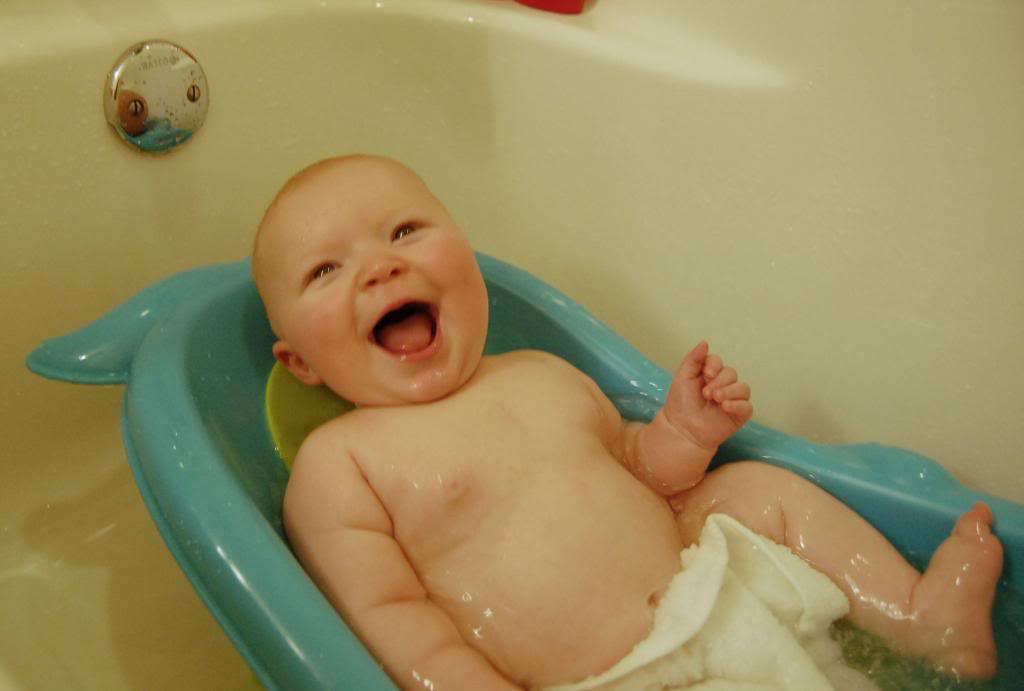 Likes: Eating, bouncing, looking at himself in the mirror, taking a bath, smiling at mommy and daddy and chewing on his Sophie the Giraffe. Bath time is my favorite part of the day…and it’s Hudson’s too. 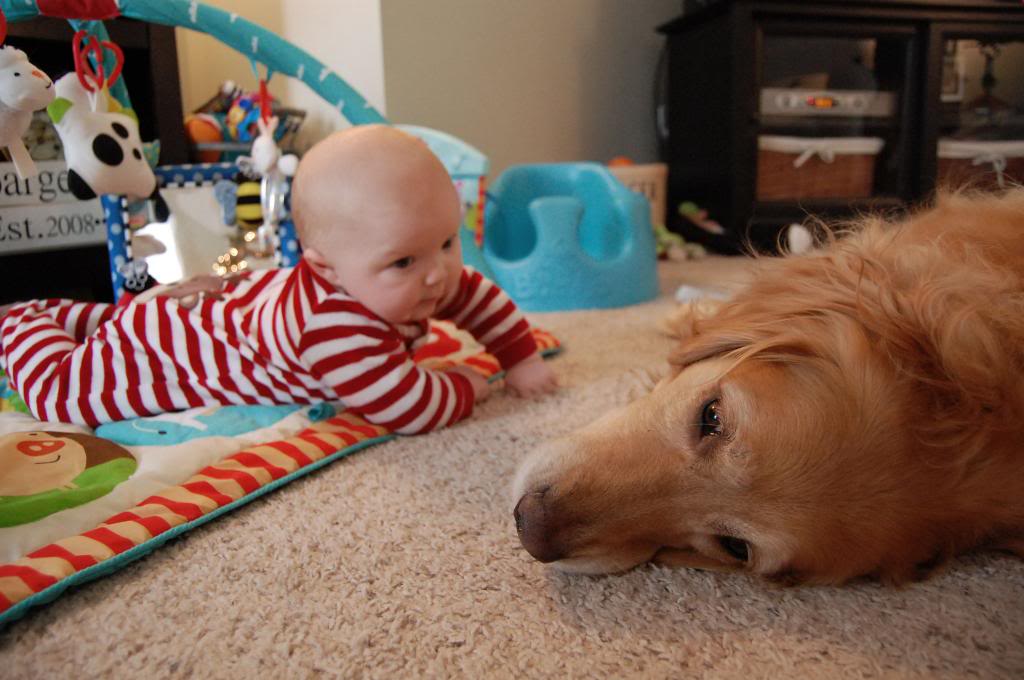 Postpartum: The holidays did not help me in this area! Breastfeeding has definitely helped me shed weight, and I am so thankful for that, but I still have some work to do. 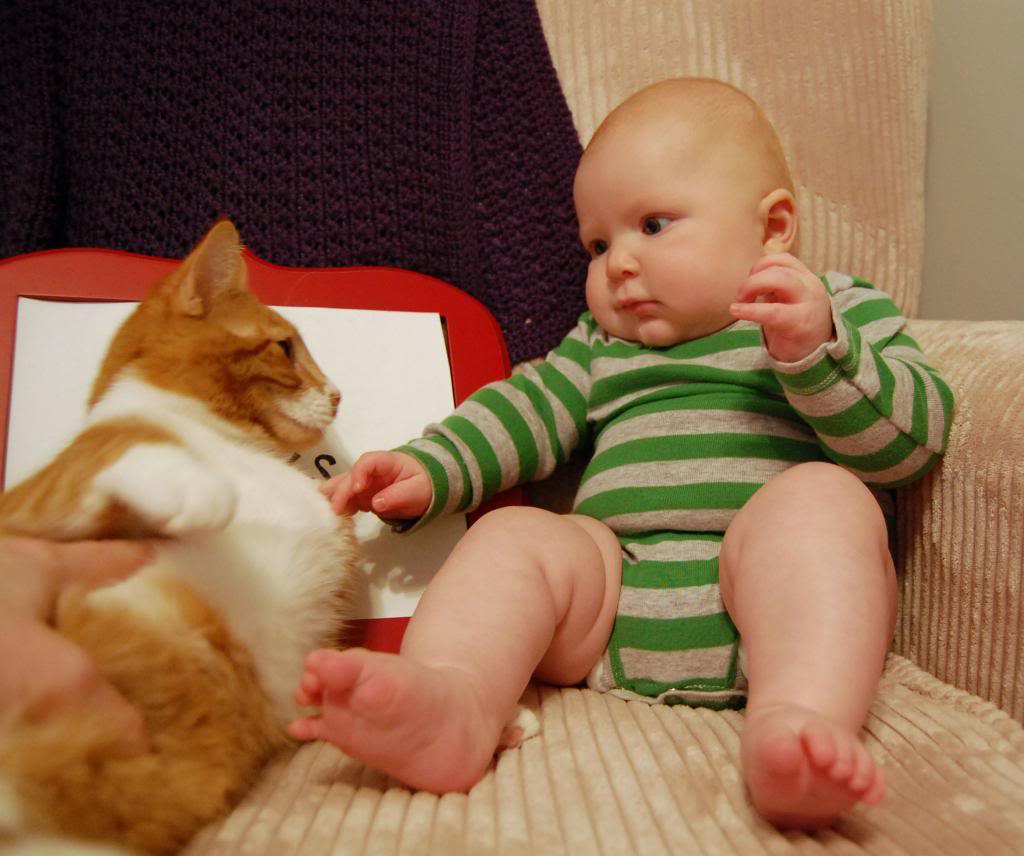 Social: Hudson loves to crack a smile! He also loves to watch the other babies at daycare and is starting to enjoying going. At first when I would pick him up for the day he would instantly start crying when he saw me. Now he is usually all smiles! This month he started “talking” to us and loves to hear his own voice. I can’t wait for him to say mama! He also loves to watch Wrigley and our cats. I‘m excited for them to be best friends one day. 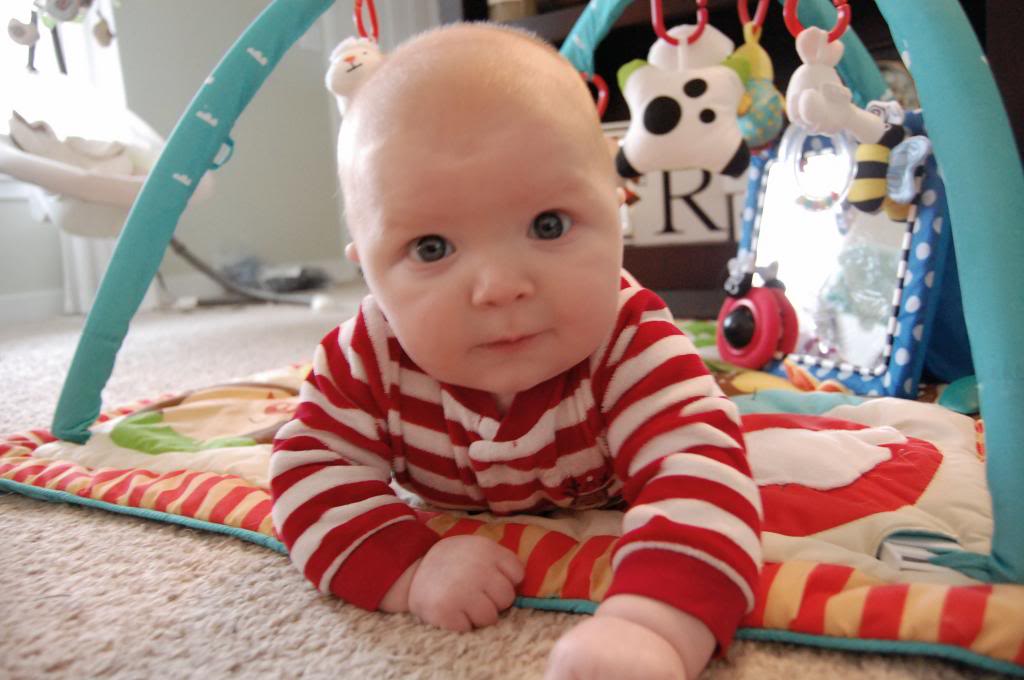 Milestones: Hudson can hold his head up and roll from stomach to back (although he doesn’t do it too often because he’s such a chunk!). He also started giggling this month and it is just about the cutest thing ever! His hand-eye coordination has improved a lot and he loves putting toys in his mouth. 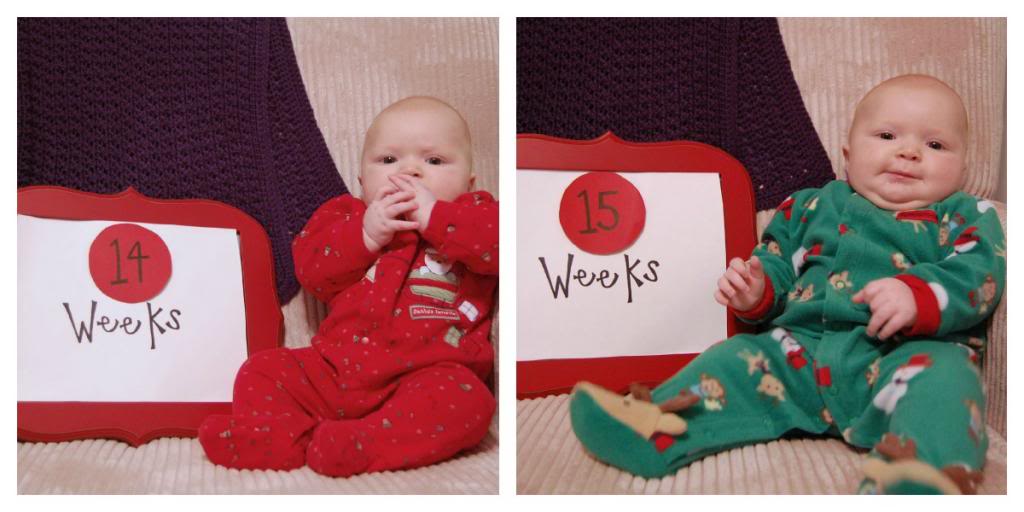 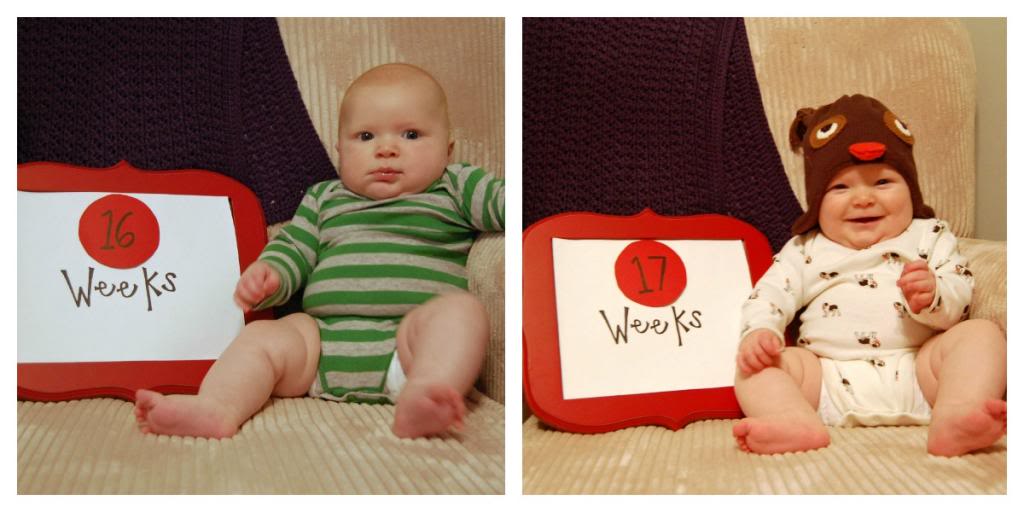 Look at those leg rolls! 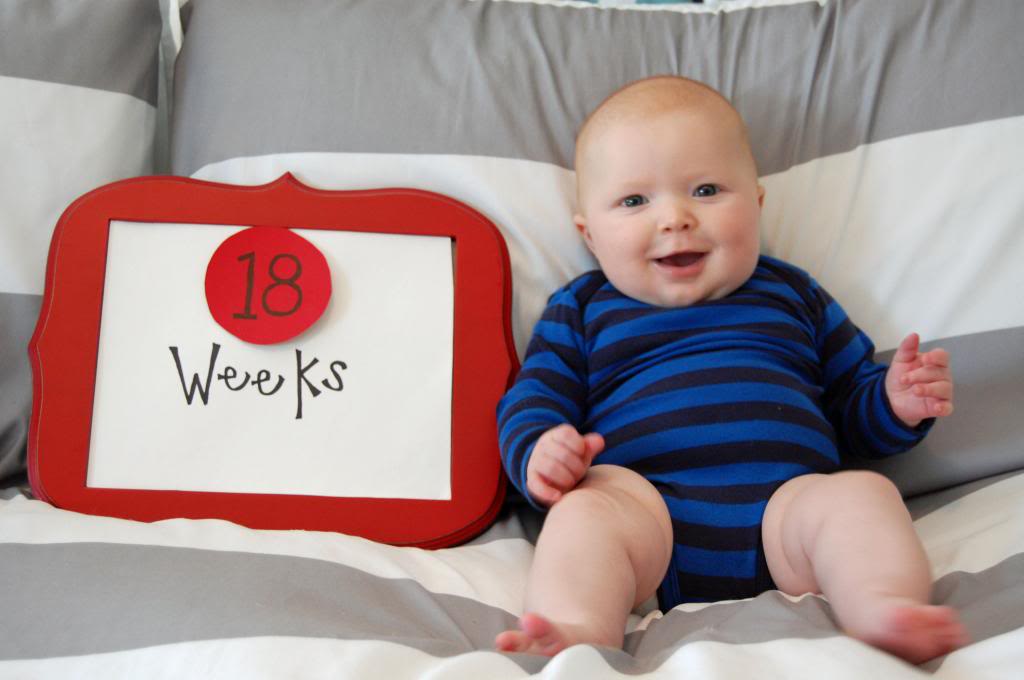 We love you big guy! You are such a joy!

« The cutest baby book ever…and a giveaway!
This is why we don’t wear white (and baby book a winner!) »