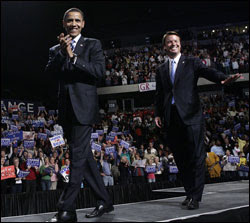 Finally the Dems started to show Michigan a little love. After being ignored for almost a year, Obama came to Grand Rapids, and it was BIG news I tell ya. He spoke at the Van Andel Arena, which is down the street from Cooley. He was set to speak at 7 pm and around 2 pm we started seeing the lines form. There were people everywhere and they had to close down the side streets. It was exciting! The line of people stretched all the way to Cooley…and throughout the day we kept peeking at the crowd as it grew larger and larger. I sort of wanted to go, but the thought of 12,000 people freaked me out. Oh and John Edwards was there too….making this an even bigger event that anticipated. I did get to watch Obama’s speech on T.V. when I got home…and man, he is a good speaker. I’m mad at myself that I totally missed what might have been my one and only chance of seeing the possible future president.

On another note, I got to speak to my dear friend and bridesmaid Katie on the phone. I miss her terribly. She lives in Walla Walla Washington…fun to say huh? And she just got a promotion at her work…she has a big girl job with a big girl title now. Congrats Katie!

So after talking with her I started thinking again about how I was a dope who missed out on Obama. And that got me thinking about a few famous people that I didn’t screw up seeing: namely Nick Lachey, Al Gore, and Billy Blanks. Nick Lachey (post break up with Jessica Simpson) was once on my flight from Cincinnati to L.A. He was in first class. I was not. I walked by him and freaked out on the inside but totally kept my cool on the outside. He was in his seat and talking on a cell phone…he didn’t see me. Thinking back on it I totally should have “tripped” and fallen in his lap…but he’s too short for me anyway.

I heard Al Gore speak last year at a conference I attended in Florida. It was amazing. I pretty much only attended the conference because I knew he was going to be there. I love me some Al Gore. People say that Jon looks like a young Al Gore….which kind of works because my nickname when I was little was “Tipper”…so we were destined to be together.

Stay with me, I totally have a point to this post. Now, meeting Billy Blanks was entirely different. In case you don’t know who I’m talking about, BB is the creator of the Tao-Bo workout. I was totally obsessed with him back in the day. So (here is where Katie comes in) when it was our senior year at Redlands and we heard he was coming to work out with us, Katie and I were majorly excited about it. And let me tell ya, it was quite a work out. When Billy Blanks is yelling at you to step it up an keeps saying “yeah, let’s go…push it” you really push yourself man. He even walked around and held up his hand for me to hit him while doing his signature move “the speed pass” it was awesome! I totally hit Billy! Anyway, below is a picture of Katie and me with Billy…and his daughter. I didn’t want her in the picture, but she just jumped in. 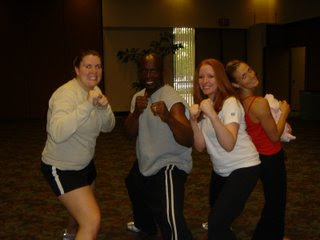 We were totally ready to kick some booty!
(p.s. why is my hair down? I know this was after the work out and
I surely didn’t exercise with all that hair in my face…
I must have tried to beautify myself for Billy)

« Happy Anniversary to Me!
Henry Lost and Found »