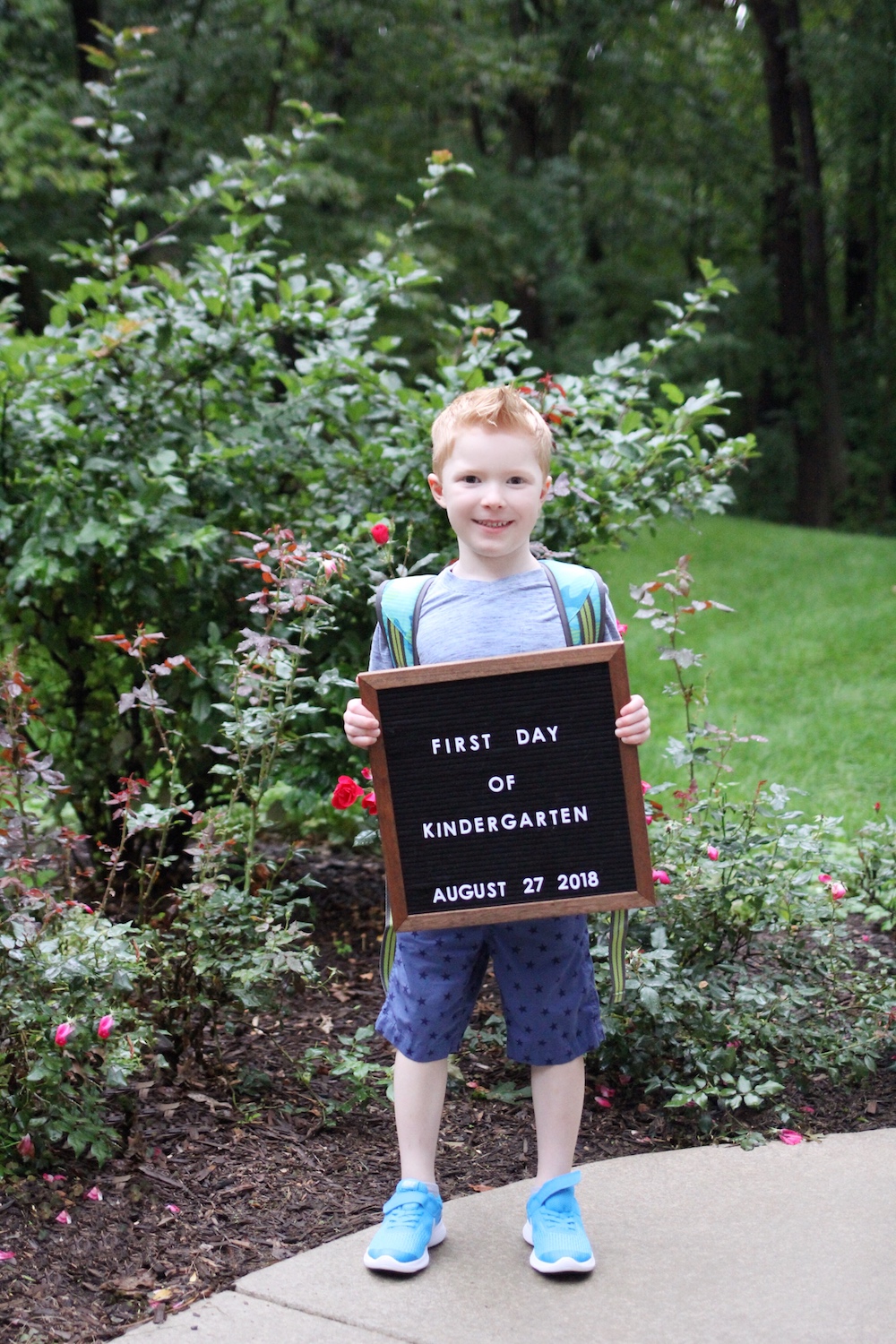 ONE: Hudson is an official kindergartner! And he is SO excited. And so are we! I thought I would cry watching him get on the bus for the first day of school, but I didn’t because we were all just so happy! Hudson was bouncing off the walls he was so excited, and his energy was contagious! I pray that his enthusiasm for school continues once the newness wears off. His teacher seems super sweet and exactly how I envision a kindergarten teacher. And one of his good buddies is in the same class. Such a blessing!

TWO: There are SO many new things to learn as a kindergartner…and as a mom of a kindergartner too. We’ve learned from just two days of school so far that Hudson needs some cooling off time before he’s ready to tell us about his day. He’s exhausted from being at school all day and me peppering him with a thousand questions that first day yielded no results and ended up with a cranky 5 year-old. So on day two I let him have a snack and play by himself for awhile…and then he told us all kinds of fun stuff…in his own time. Of course that time happened to be at bedtime. Smart boy. But I was just so anxious to hear all about his day that I didn’t care about him going to bed a little late! 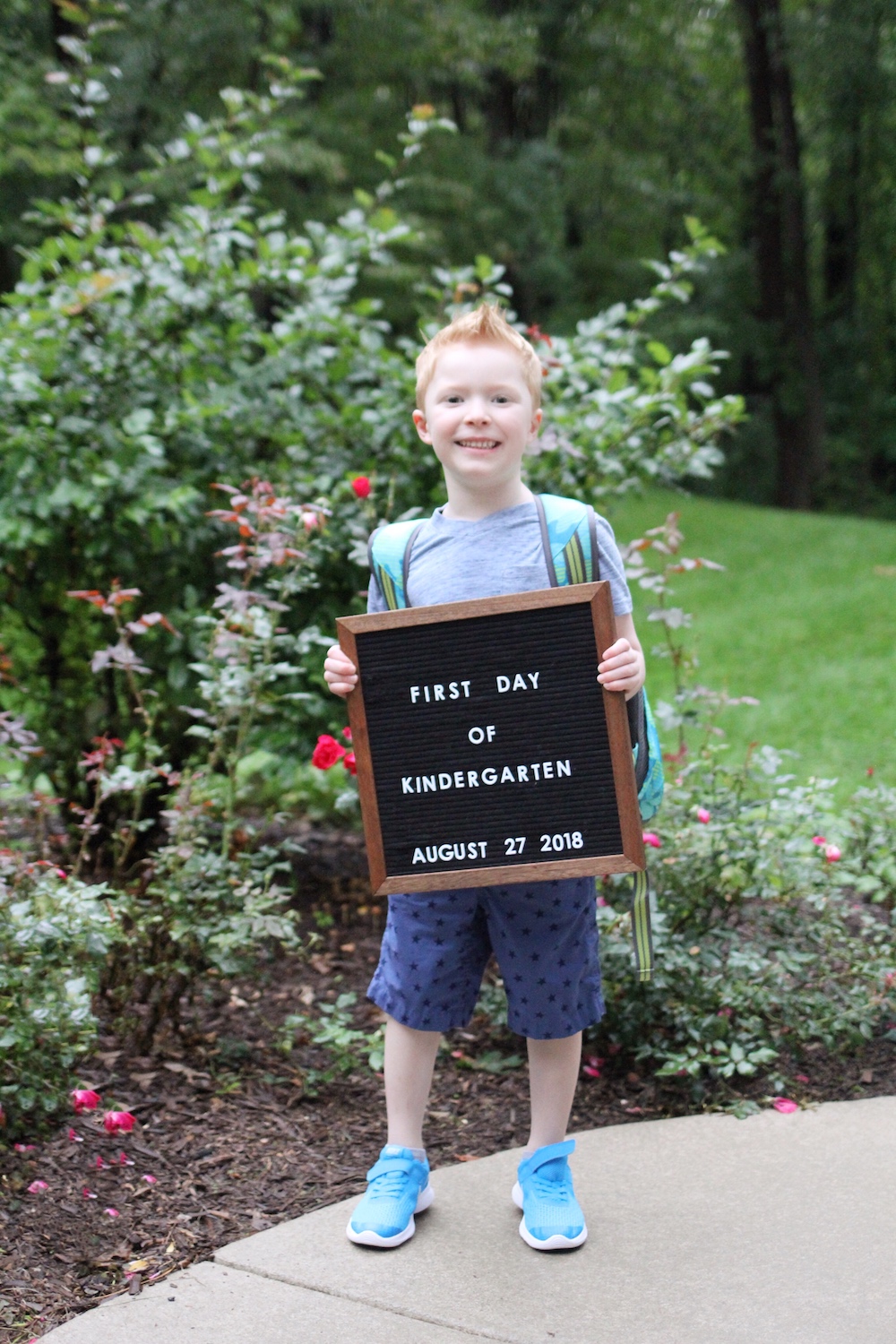 THREE: Hudson has told us some cute little gems about kindergarten that I don’t ever want to forget:

When talking about his new shoes vs. his old shoes, he refers to the new ones as the “younger shoes”

“mommy some kids forgot their lunch! So the chef at the school made them a hot lunch! But I eat a cold lunch. I like cold lunch better”

“gym time is my favorite. You get to run around and do crazy stuff. Some of the girls didn’t wear their gym shoes, they wore fancy shoes”

“two kids in my class get on my bus. We are a team and we have to hold hands. And we sit all three in one row”

“the teacher wrote my cubby number on my hand but you can’t see it anymore.” me: “what’s your number?” H: “I don’t know. But my bunny is in my cubby so I know which one is mine”

“my bus is a big number. Nolan’s (his friend) bus is a little number. Do you know Nolan’s bus number mama?” 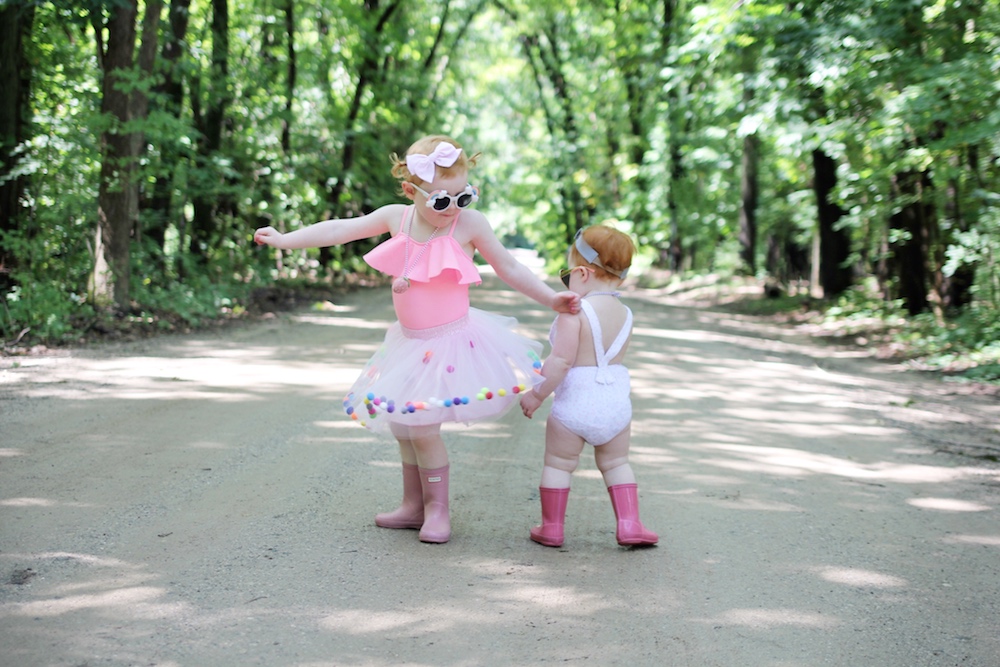 ONE: Sadie is the big boss at home now that her brother is away at school. After I snapped Hudson’s first day of school photos she had a fit that she didn’t get to take them too. And then wanted to get on the bus with him. I think having a little break from big brother will help her gain some independence and will be so good for all of us.

TWO: Without Hudson to play with and pester, Sadie has been spending more time with Belle and it is just the cutest thing EVER. I love watching their relationship grow. They really are the best of friends. 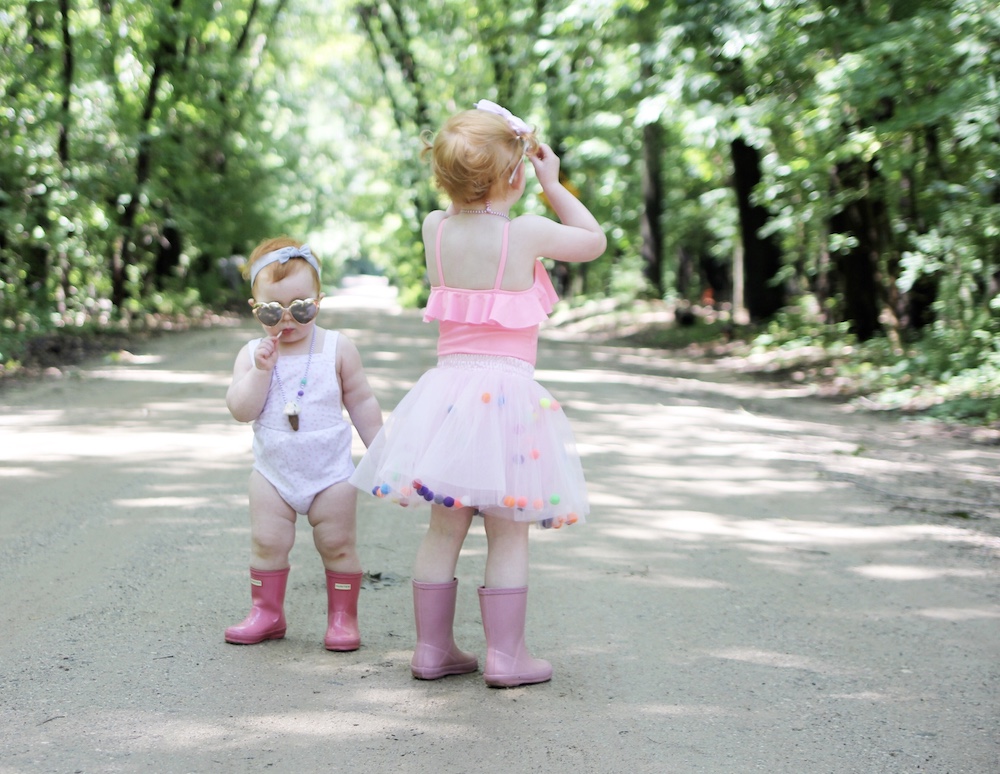 THREE: We signed Sadie up for dance classes! I was a little worried about how she would do in a class so I  took her to a sample class last week and she LOVED it. She’s usually pretty outgoing but over the summer has become a bit clingy. Hudson was going to do the dance class with her but chickened out last minute when he realized no other boys were going to be in the class. I totally thought Sadie would refuse to go in to the studio too but she shocked me when she walked in and started dancing her little heart out! I can’t wait for her to have an activity that is all her own. 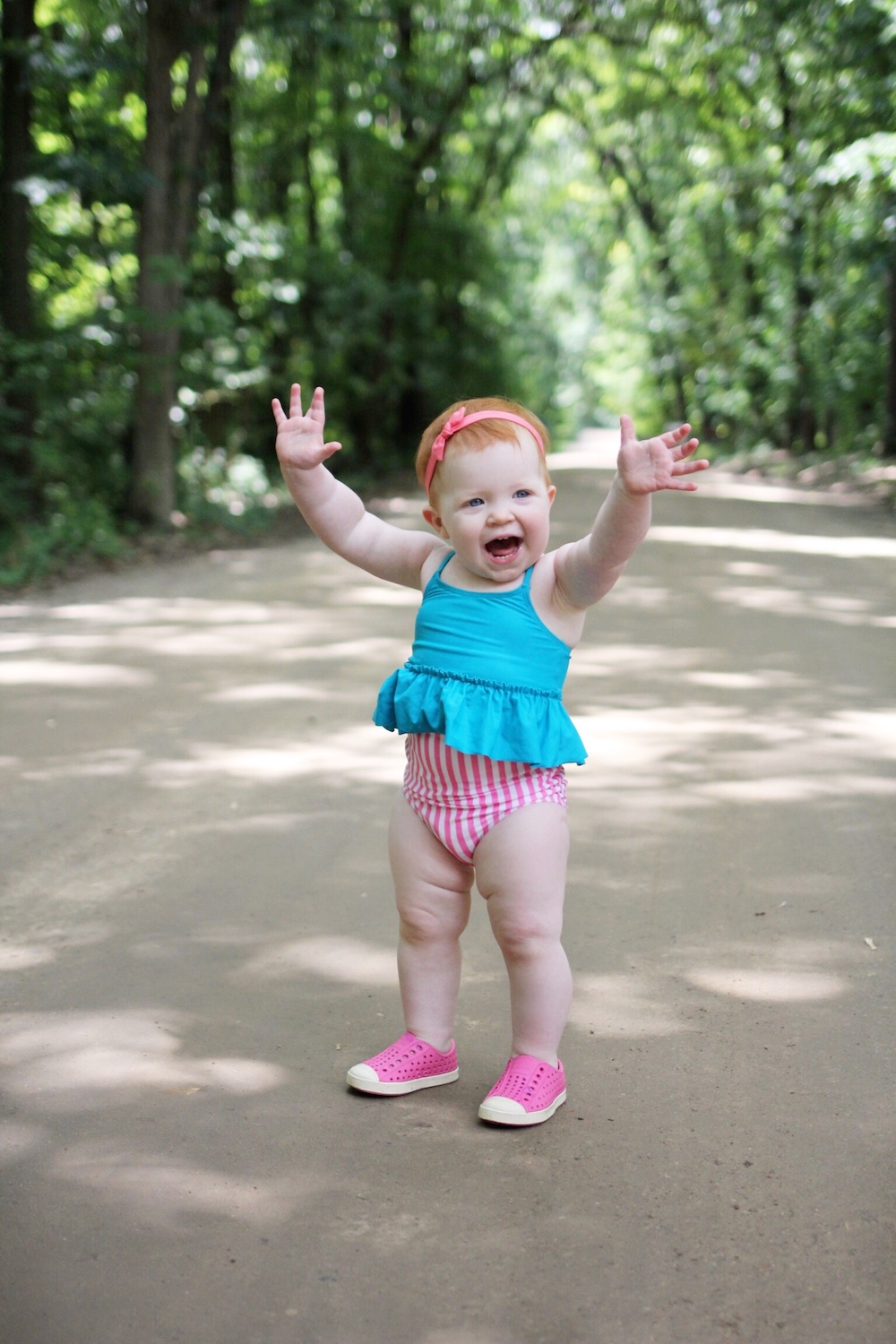 ONE: On Hudson’s first day of school little miss had a blast waiting at the bus stop. She kept saying “cheese!” every time I pulled out my phone to take a photo of Hudson. And then all day while he was at school she kept asking me “where Hudsey?” I love how she loves him! 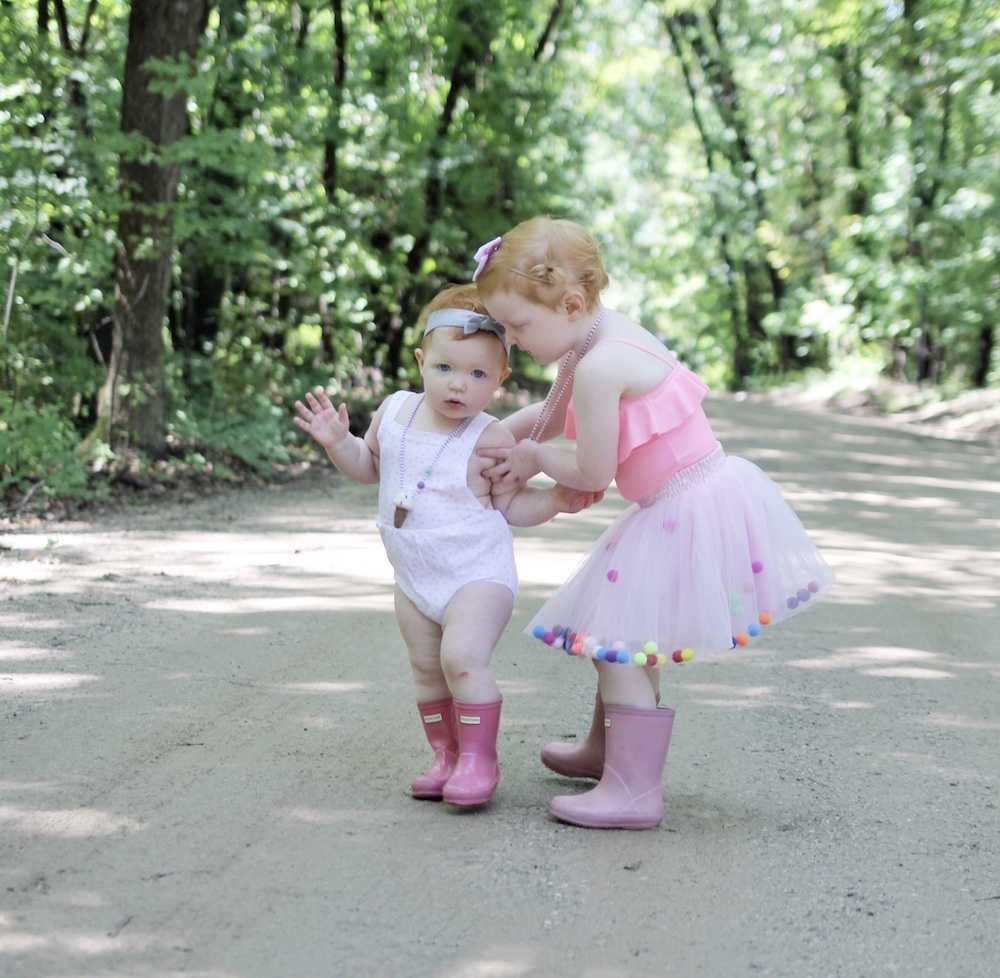 TWO: Every princess is “punzel” aka Rapunzel. Doesn’t matter if it’s Ariel or Elsa, it’s all punzel to her! Belle LOVES playing with Sadie’s princess dolls so much and it is just the cutest. Her other favorite toy right now is her baby dolls. Sadie plays with babies a little bit but Belle is OBSESSED. She’s always feeding a baby it’s “baba” or putting it to bed. She’s the cutest little mama.

THREE: We’ve officially reached the “NO” phase! Everything is “NO!” all day every day. The big kids get her all riled up in the car with shouting “NO! NO! NO!” over and over and it’s pretty funny. She also says “I want that” and points to something…I’m trying to get her to say “please” instead and she will when I prompt her. And she always lets out the cutest “tank ou” after. 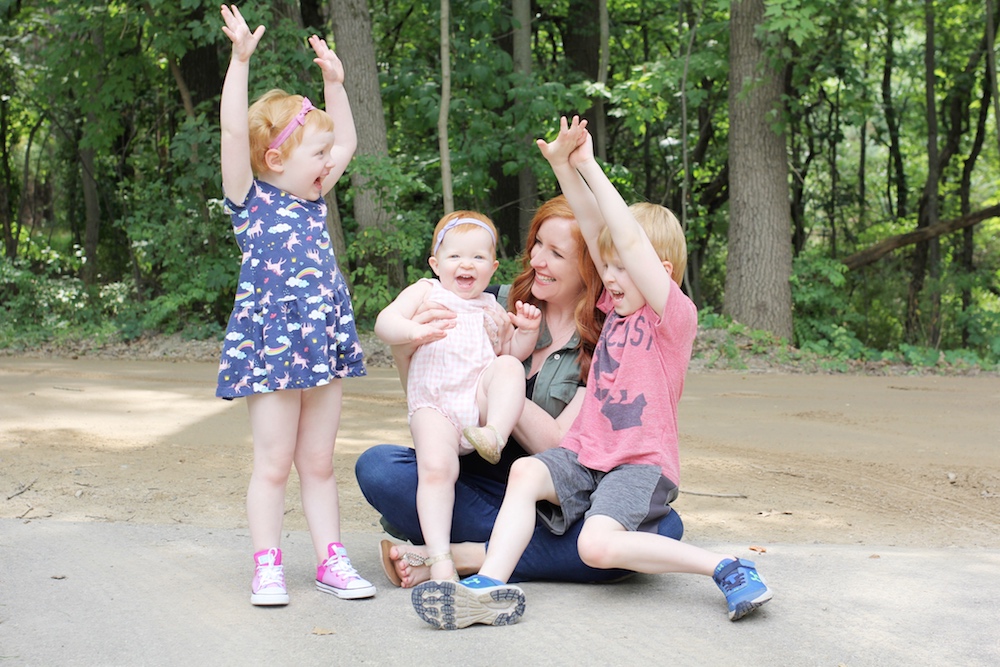 ONE: So many of you have asked how I’m holding up now that my baby is in school. And so far (I mean, it’s only been 2 days) I’m loving it! And I’m LOVING the bus! It picks up across the street from our house and is just so dang convenient! Once Sadie starts pre-school next week there is no way I would be able to get Hudson to school and Sadie to school 15 minutes away on time, so the bus is working out so great. Plus Hudson loves it, which really helps! He isn’t on it for very long, especially in the afternoon, so it’s perfect for us. Our bus driver gets to know the kids and makes the kindergartners sit in the front, so that makes me feel better.

TWO: I have so many projects I want to work on once both kids are in school. But Sadie only goes three mornings a week, so I know those few hours are going to fly by and I’ll probably get nothing done. As usual.

THREE: All the newness is overwhelming me! Hudson learned to ride a bike without training wheels, got his first loose tooth, and started kindergarten all within 2 weeks. And next week he turns 6. What the what? And although I held it together with him starting kindergarten, I think I might be a hot mess with Sadie starting pre-school. It’s just such a big step for her and she’s always just been home with me. Why do babies have to grow up???

« To My Little Boy, Before You Start Kindergarten
SIX »