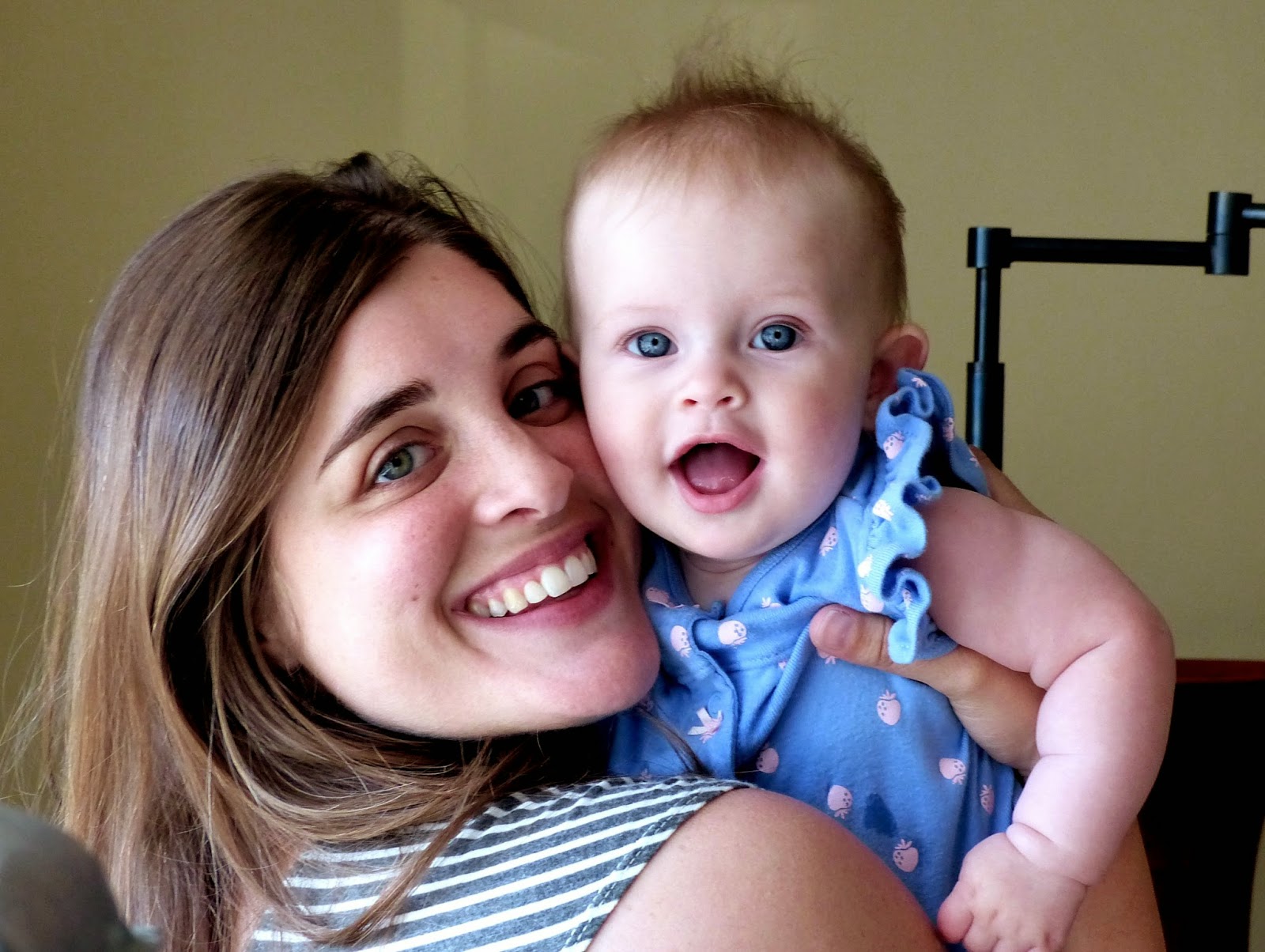 Hello everyone! My name is Dianna from Our Sweetened Life where I write about all things I find inspiring…life, family, interior decor and food!  I’ve been married to my husband for about two years and our daughter, Laina, was born on January 14, 2014 and is now four months old. I’m happy to report that she is exclusively breastfed! We have had quite the journey together since her birth and I’m thrilled for the opportunity to share it with you.
Our breastfeeding journey began before I gave birth to Laina. While pregnant, I had my expectations and hopes of how her birth would go (drug free and natural) and I never ever considered giving her formula. I also knew that I would be going back to work after 12 weeks of maternity leave so I would be pumping at work. My goal is at least a year. Well her birth didn’t go as planned and we had just about every complication possible with inductions (she was a full two weeks late and the hospital wouldn’t let us wait any more). After her C-section delivery, she was immediately taken to the NICU because we both developed a fever during labor. So I didn’t get to hold her, touch her or put her to my breast immediately after birth. The hospital knew our plan for breastfeeding and understood the importance of getting the baby to my breast as soon as possible. So even though it was about two hours after her birth, I was finally taken to her in the NICU where she was put to my breast…and she took immediately! She nursed for about 10 minutes. I was elated and we were all cheering!
For the next three days we stayed at the hospital, I went over to the NICU and nursed her throughout the day. They urged me to sleep at night and they gave her formula. I wasn’t thrilled about that, but I also knew that I needed the rest. (I had to be at my best for Laina’s sake). Thankfully, she didn’t show any signs of nipple confusion at that point! Before leaving the hospital, I became sick to my stomach. No one could figure out what was going on but I knew something with me wasn’t right. But, they discharged me anyways. The day of discharge, my milk came in and boy did it come in! The engorgement was PAINFUL (it felt like fire) and even though I put Laina to my breast often, I just couldn’t get relief. So I had to use a hand pump between feedings to release the pressure! There were plenty of times that I “sprung a leak” and milk would be literally FLOWING out of me, all over the place. The worst was in the middle of the night when I would feed her and the other nipple would be spewing milk all over the place. I didn’t know what to do with all this milk and I never expected I would have such an oversupply!
Unfortunately, as I suspected something was wrong with me, something definitely was. Two days after being discharged from the hospital, I was admitted to the Emergency Room and went through every test under the sun to figure out what was wrong with my stomach. We suspected gall bladder or bowel obstruction, but what turned out was an inflamed stomach lining (gastritus) due to the heavy medication I was given during the birth of Laina. It was a huge relief to not need emergency surgery, but I had to “ride it out” and eat saltines and broth for a week. During the testing, the Dr. wanted to give me a type of contrast that would prevent me from being able to breastfeed for 24 hours. I said: No Way! It was so soon after Laina’s birth and I feared that if we didn’t breastfeed for 24 hours, we would lose the bond, the latch, everything. In my mind, I felt that we already didn’t have the birth I wanted and there was no way breastfeeding was going to get screwed up! 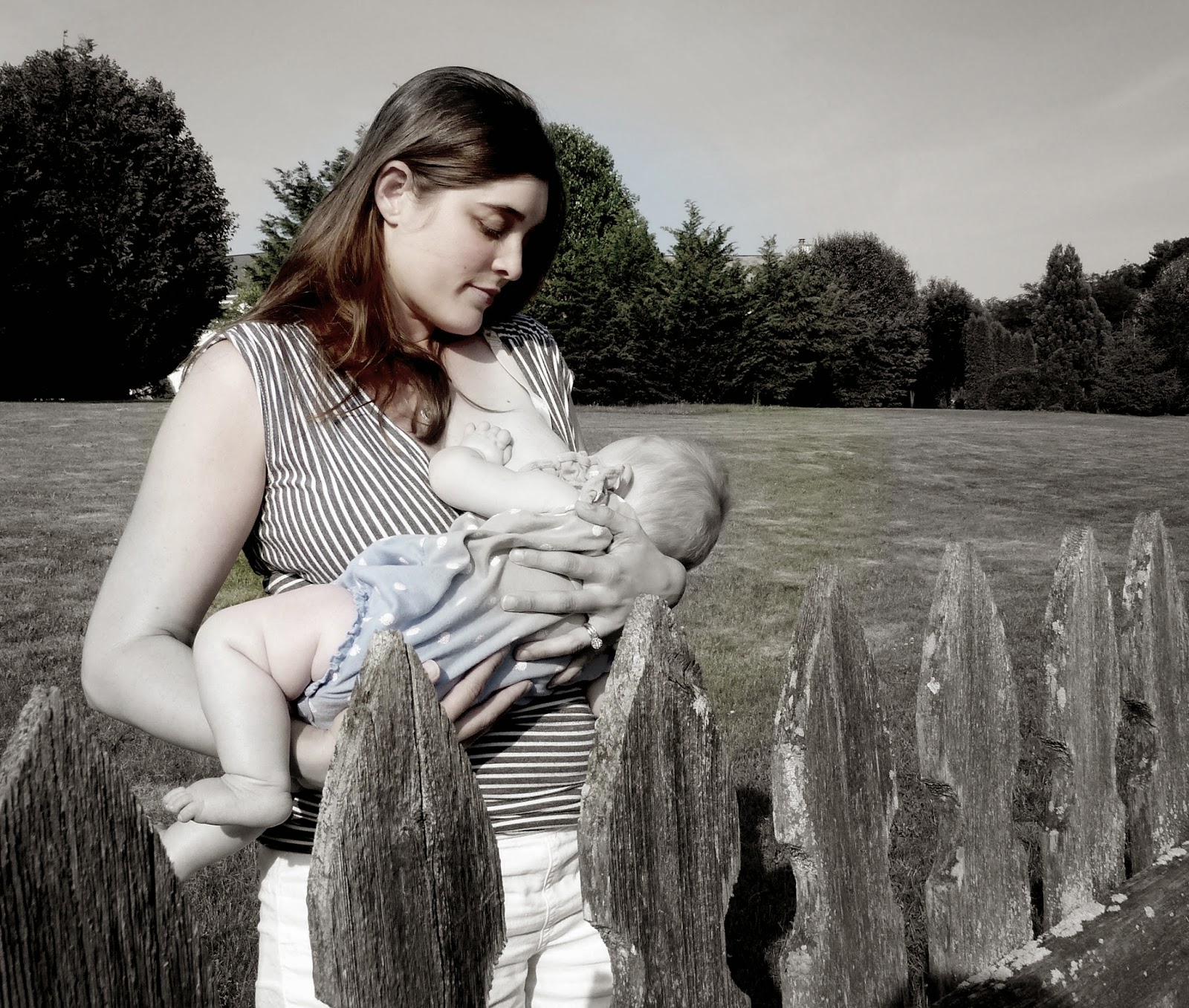 The gastritus worked itself out after a week or so. I was incredibly weak for what seemed like forever. Between the C-section inciscion, lack of nutrition and the baby taking virtually everything I had (which wasn’t much), I barely got off the couch for three weeks. Those first few weeks of breastfeeding were very tough, but we got through each hurdle, one by one. Laina and I had a lot of the typical issues. Her latch was shallow to begin with, so her pull was very pinchy and painful.  Laina also preferred the left breast as opposed to the right. She would cry every time I put her to the right one. I also realized that my let down was really fast (and still is). She would pull off, choking and would get squirted in the face! So to remedy that issue, I had to hand express for a few minutes to release the pressure before she could latch on and stay on. In addition, I learned that feeding her while I was sitting up, was making things even more difficult for her with my fast let down. I found new positions such as leaning back and side lying was incredibly helpful. Side lying is probably still our favorite!
Just as we got into a groove with our breastfeeding routine, I developed a milk blister on my left breast. Of course, the breast she loves! The milk blister is similar to a blocked duct, pain-wise. There was a lot of pain concentrated to this large white blister beneath my nipple. Every feeding was excruciating and between feedings I applied a warm compress. The milk blister lasted about 3 days and I’m so thankful it’s over. I received a lot of help and advice through an online breastfeeding support group that I am part of. New and old moms post questions and scenarios daily and even though I may not have a particular problem someone else is dealing with, I still learn a lot. 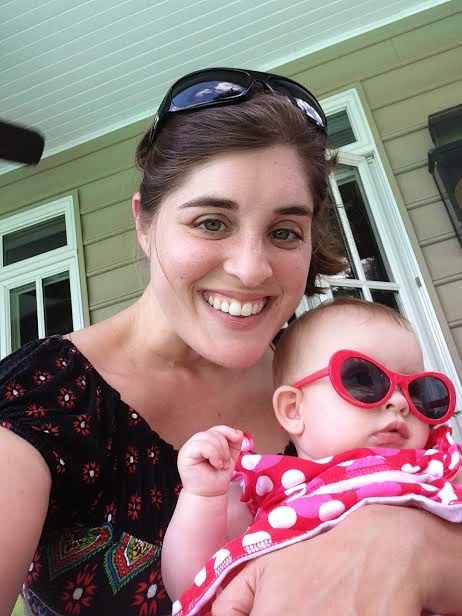 I’ve been back to work for a month now and Laina is still receiving 100% breast milk! I pump at work which is unpleasant, but I still wouldn’t have it any other way. At night and on the weekends I ditch the pump and solely breastfeed. Some days I’m really tired and don’t feel like pumping in the morning, but I know I have to. I know it’s a normal feeling. I mean, Laina has been growing solely because of everything I’m giving her! It’s incredible that we can provide for our babies by what our own bodies make. It’s incredible that our milk changes as our babies get older, adapting to their needs. It’s a true gift. There hasn’t been a moment where I wanted to stop, just moments here and there where I’m utterly exhausted. I’m proud to say we are still going strong!
One thing I kept telling myself and Laina over and over again was that we are both figuring it out together. When her latch was too shallow, when she hated the right breast, when we had to lie down all the time, when she would pull off my breast, practically taking the nipple with her, I would tell myself that she’s learning how to breastfeed just like I’m learning what’s best for both of us. When Laina latches on, I thank her. I talk out loud to her while she’s feeding and tell her she’s doing so great. I feel incredibly fortunate to have the amazing resources available to me and that we are still breastfeeding. While Laina is still just four months old, I don’t plan to start weaning until she’s about a year old. Even then, I’d still like to continue if she wants to continue. 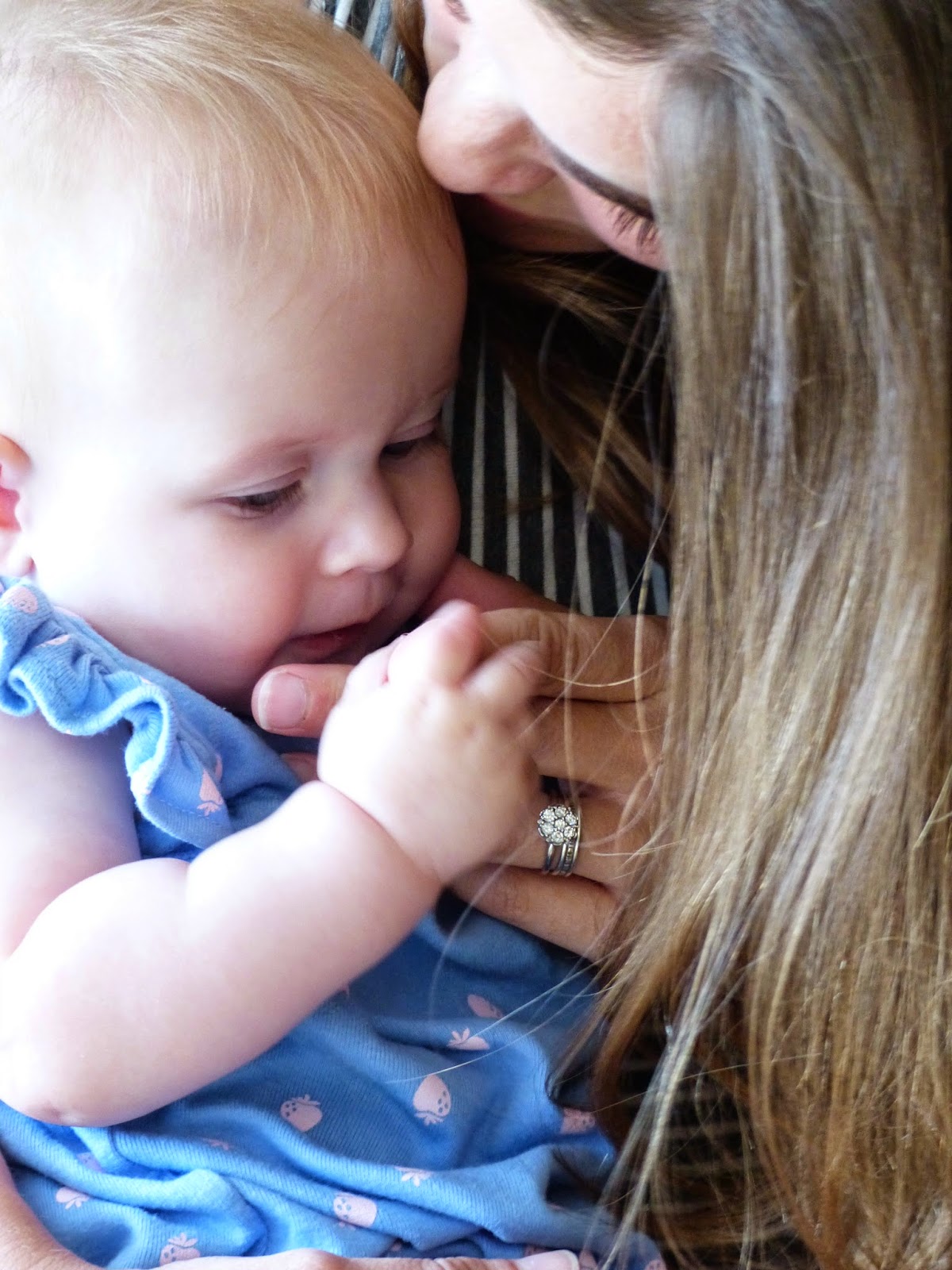 Some of my favorite moments of breastfeeding are seeing and feeling her small, chubby hand on my breast, her little mouth darting around trying to find my nipple and when her eyes start closing because she’s so satisfied. This journey has had some tough times, but a lot of amazing moments as well and I wouldn’t have it any other way. For anyone thinking about breastfeeding, I think I would say to definitely try to seek out a support group. Connecting with other breastfeeding mothers will help and you will learn so much. Also, take each thing one at a time. Some days will be hard, but others won’t be so hard and you will have sweet, sweet moments with your baby to cherish. Try not to put so much pressure on yourself. The less stress and pressure you have, the easier your journey will be, promise. And finally, your breastfeeding journey is unique to you and your baby. No two babies are the same and no two stories are the same. Enjoy your journey for what it is, even if it’s not what you expected. You will get there! 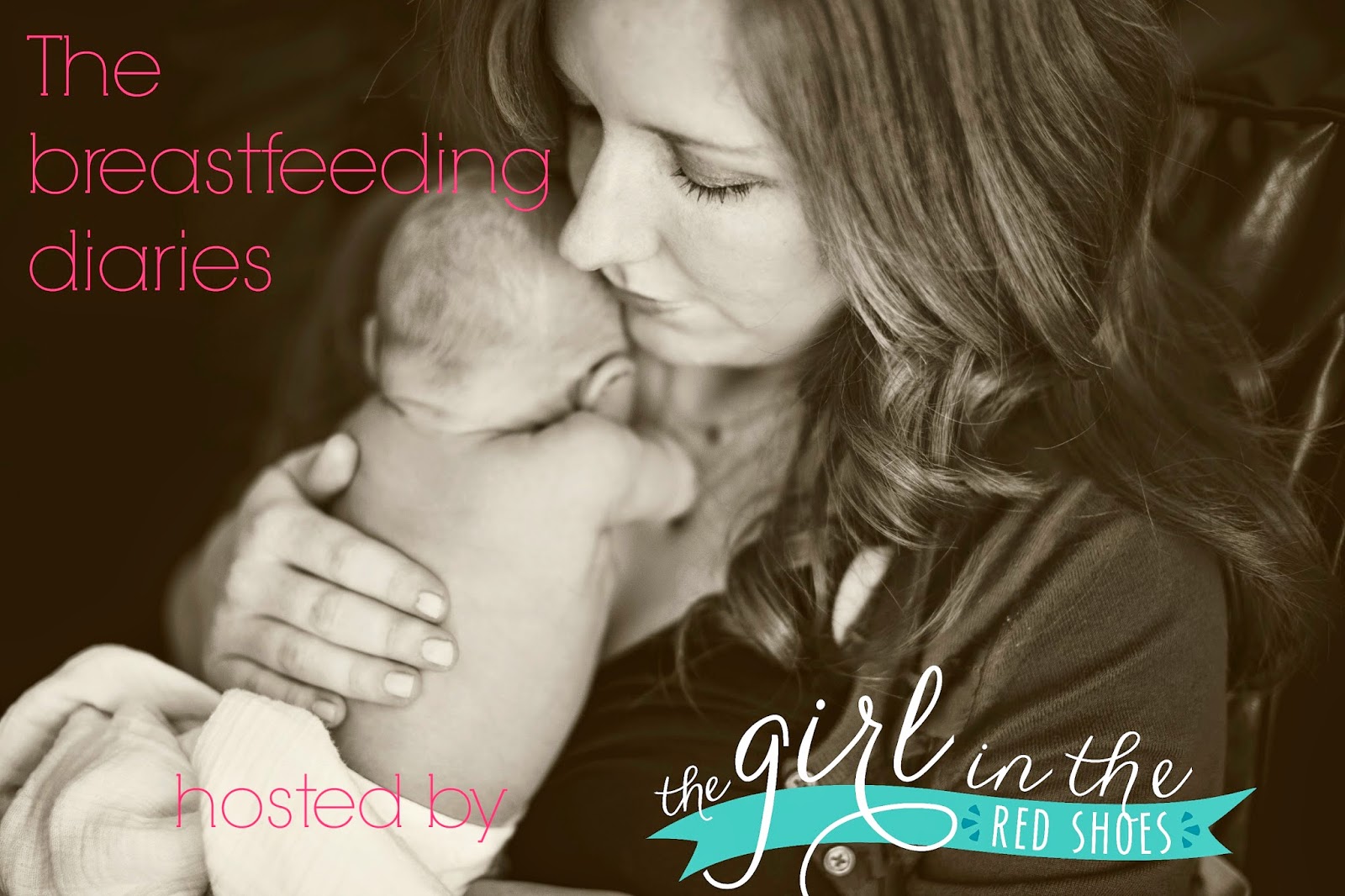 « What I’m lovin’ now
Adventure is out there! »