We finally did it…we registered. And let me tell you it was F-U-N. Jon and I both took Friday off of work to spend some time together and register for some fabulous wedding gifts. I came prepared with a detailed list of the things we needed…and did we use it? Not really. We were both overwhelmed with the amount of stuff in the stores. I actually think Jon had more fun than I did. He was in charge of the “gun” and I was in charge of the list. 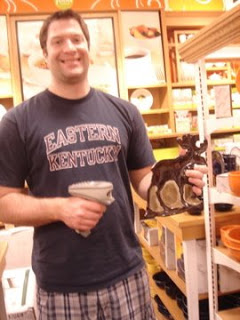 Here is Jon with the gun registering for a moose shaped plate (his choice, not mine). Periodically throughout the day I would be in one part of the store and Jon would be in another and I would just hear “beep” “beep” ‘beep” as he was picking out items. When I got home I discovered not only did he register for the matching coasters to his moose plate, but also a bear and moose salt and pepper shaker, and a monkey shaped potato peeler. 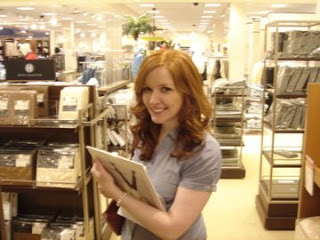 Here I am trying to look professional with my list. 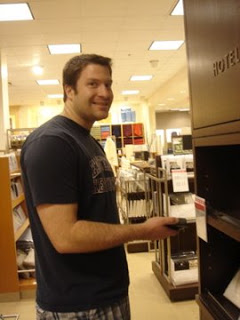 We ended up registering at Macy’s, Kohl’s, and Pottery Barn. Oh and Crate and Barrel too…but that doesn’t really count because we did it online a few weeks ago because there isn’t a C&B close to us. We didn’t plan on doing 4 stores, but registering is hard! I was stressing out over our bedding. We didn’t really like anything we saw at the stores. So we added on Pottery Barn because we found the cutest duvet cover that we both liked (a hard task, let me tell you!). Side note: you try explaining the difference between a duvet cover, a comforter, a blanket, and a quilt to a boy…tough stuff, believe me. 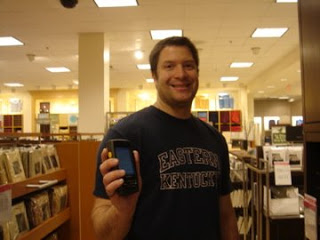 The Macy’s gun wasn’t as fun as the Kohl’s gun, but Jon made it work.