For the past few days I haven’t been feeling well at all. So today, my wonderful soon-to-be-husband called me at work to let me know he was coming out to GR to take care of me and bring me soup…..well actually, the soup was my idea…but still a nice gesture right? So when I got home from work, not only was there yummy soup waiting for me, but Jon had also magically connected my Mac laptop to his big screen TV! (I had a sneaking suspicion that his unexpected visit might have less to do with my being sick and more to do with playing with the new magic hook up cords he recently purchased…but that doesn’t really matter). Anyway, sometimes I like watch my shows (Grey’s Anatomy, Cashmere Mafia etc.) on my computer (because I don’t have time to watch them because I am oh-so-busy cleaning up after Pancake the poop monster)….but now thanks to Jon I can watch them on the big screen TV! He explained to me how all of the cords he bought transmit the computer images to the TV, but I wasn’t really paying much attention. We watched an episode of Miss Guided from ABC to test it out…and it was great. My hero. (oh and Jon likes Miss Guided! such a cute show).

Anyway, a little while later I was talking to my mom on the phone and noticed that Jon had discretely started playing his MLB baseball video game (as he has a tendency to do, from time to time). Usually I don’t pay much attention to what he is doing, but this time something caught my eye. Instead of the normal team of Detroit Tigers players, I did a double take and noticed a very familiar looking guy on the screen. It was a super cute digital incarnation of my handsome hunk of a fiancé! Complete with “Renbarger” across the jersey and his lucky number 27. I couldn’t hold back my giggles at the sight of my video game man….something about the build and stance of the electronic guy eerily resembled my own live-version hunky man. When I pointed out this fact, Jon informed me that he had made the player look like himself, complete with accurate height and weight….I just about lost it with laughter. Anyway below is a picture of my video game man. You can just make out the name on the jersey. Doesn’t it look just like Jon??? Oh boys and their video games…. 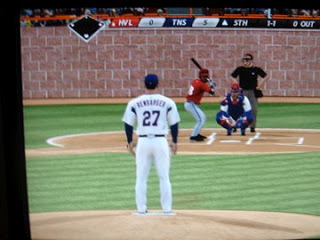