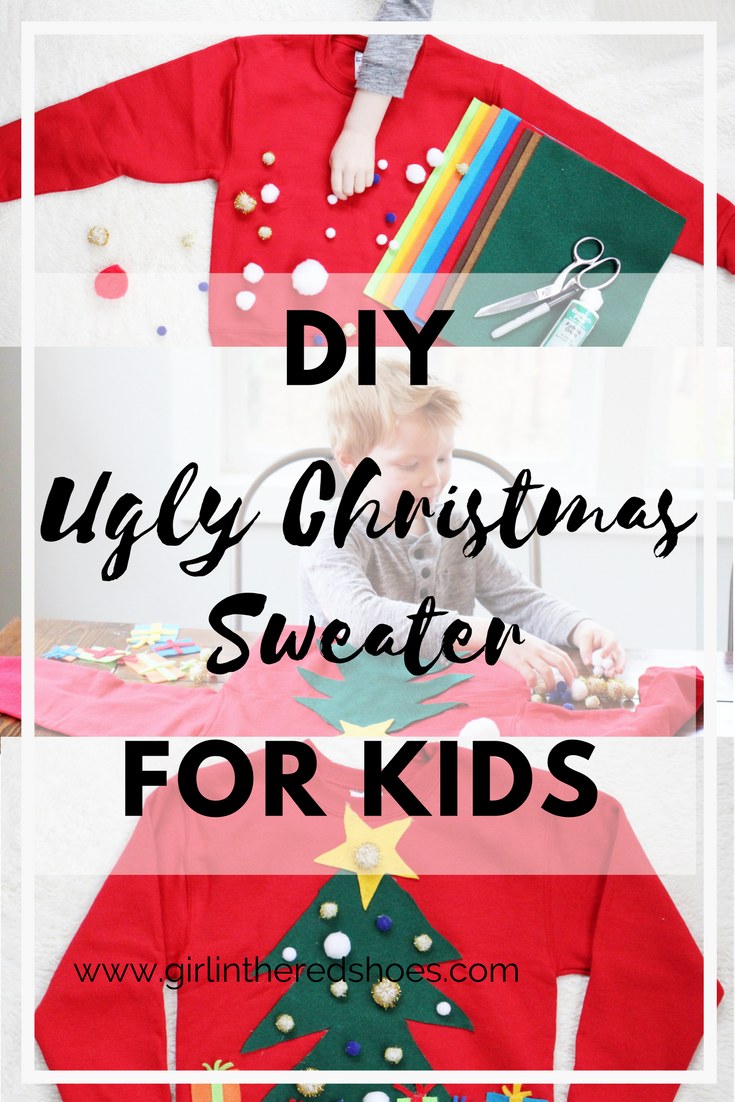 The calendar may say November, but my heart says CHRISTMAS! I can’t help but start to get in to the Christmas spirit a little early….especially when my kids are SO excited for the holiday season! Especially Hudson, my five year old. He has been counting down the days until to Christmas all year long. He’s so ready!
So when I asked him if he wanted to make a super special ugly Christmas sweater with me, of course he said YES! Except I didn’t call it “ugly”…because that would just break his little five-year-old heart. So we called it a “super fun and silly” Christmas sweater instead.
This is such a fun activity to do with your kids! Hudson loved the one-on-one time with me and we were able to whip up his sweater during his sister’s nap time. Here’s what you’ll need to make one for yourself: 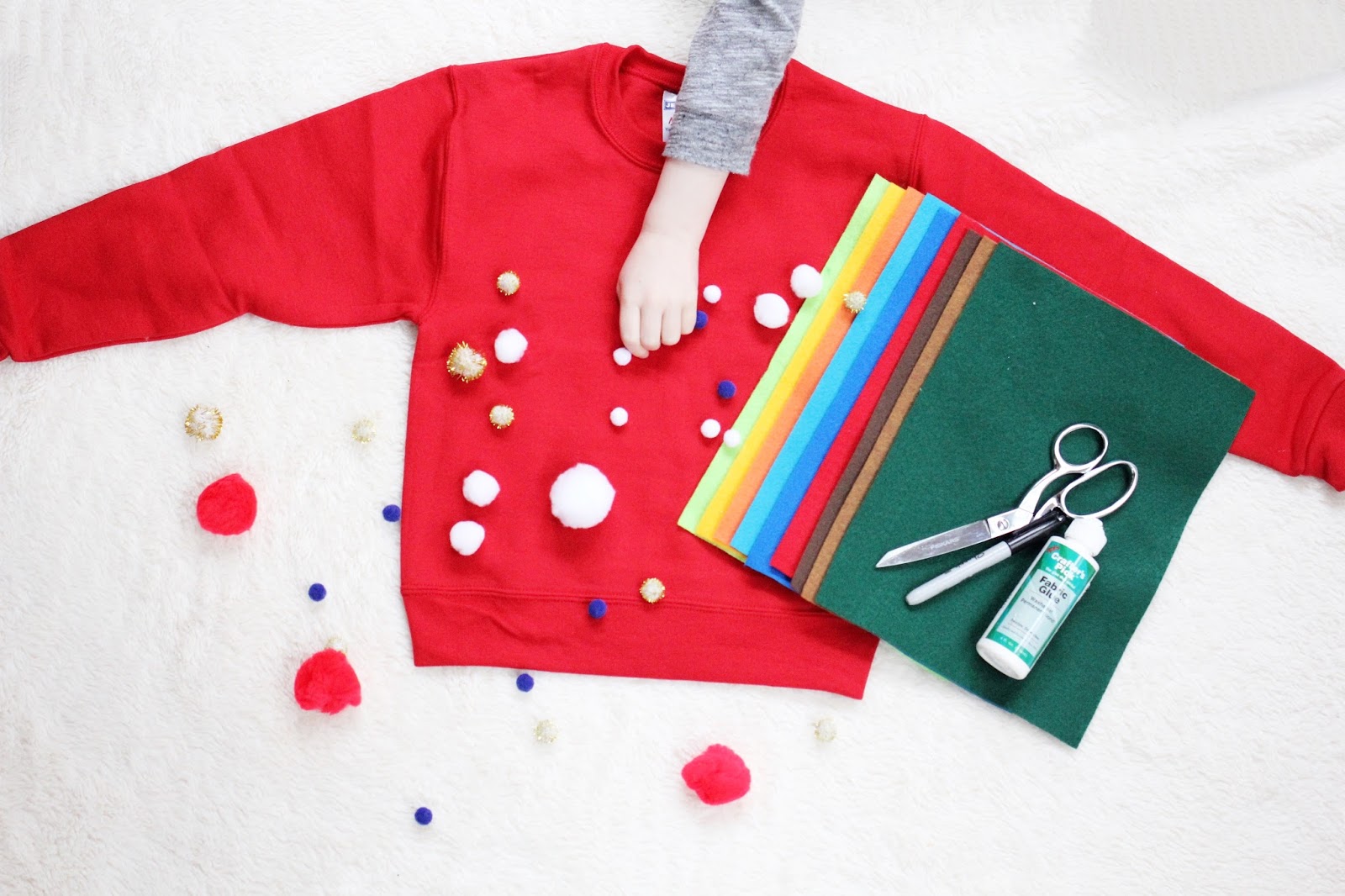 – A solid colored sweater (or in sweatshirt) I ordered this one on Amazon.
– pom poms
– felt
– marker
– fabric scissors
– fabric glue 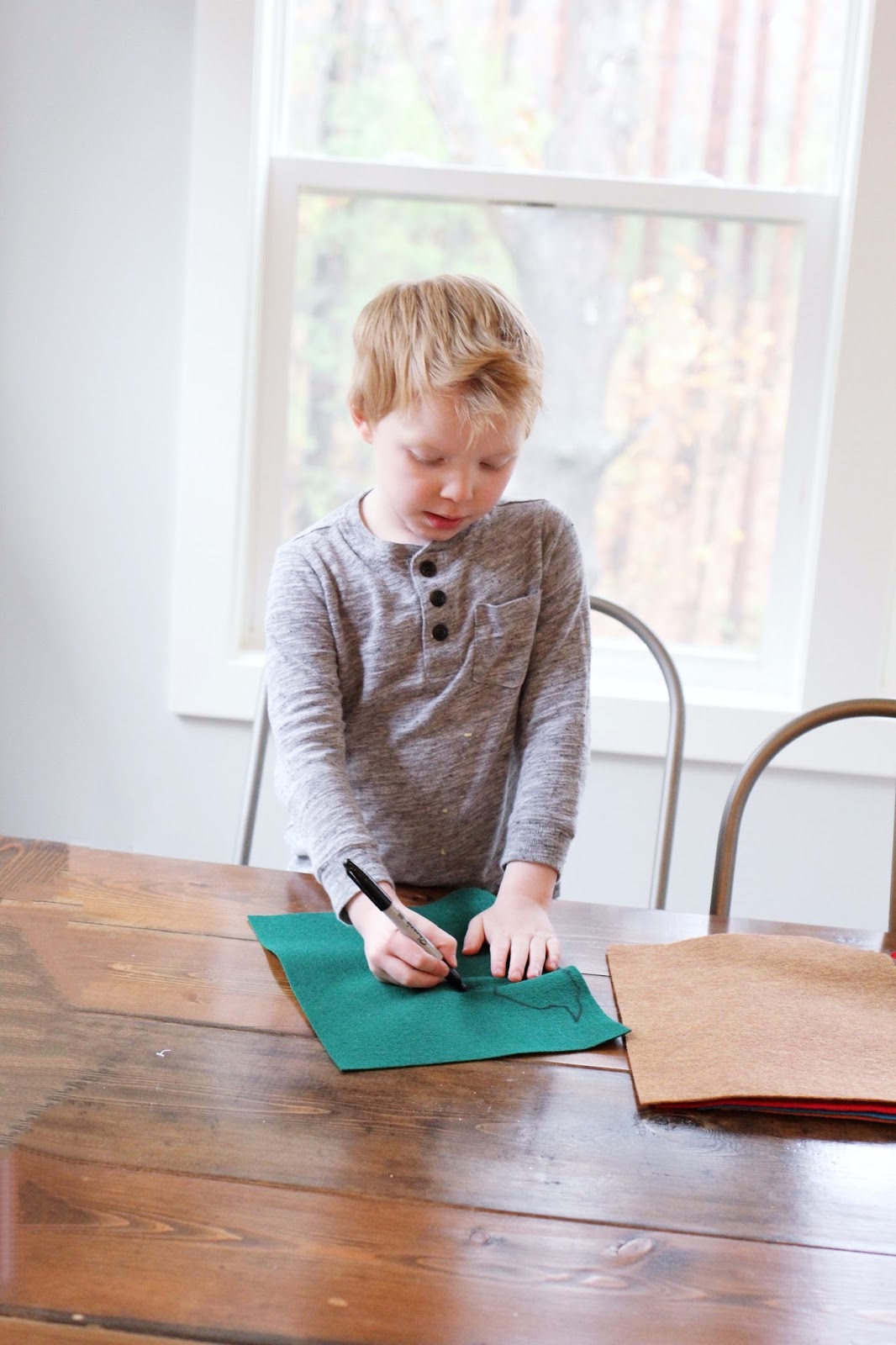 I asked Hudson if he wanted to make a Christmas tree, reindeer, or snowman (mostly because those are the only things I can kind of draw….I am by no means an artist!) and thankfully he chose a Christmas tree! I had him sketch it out with marker on to the felt. 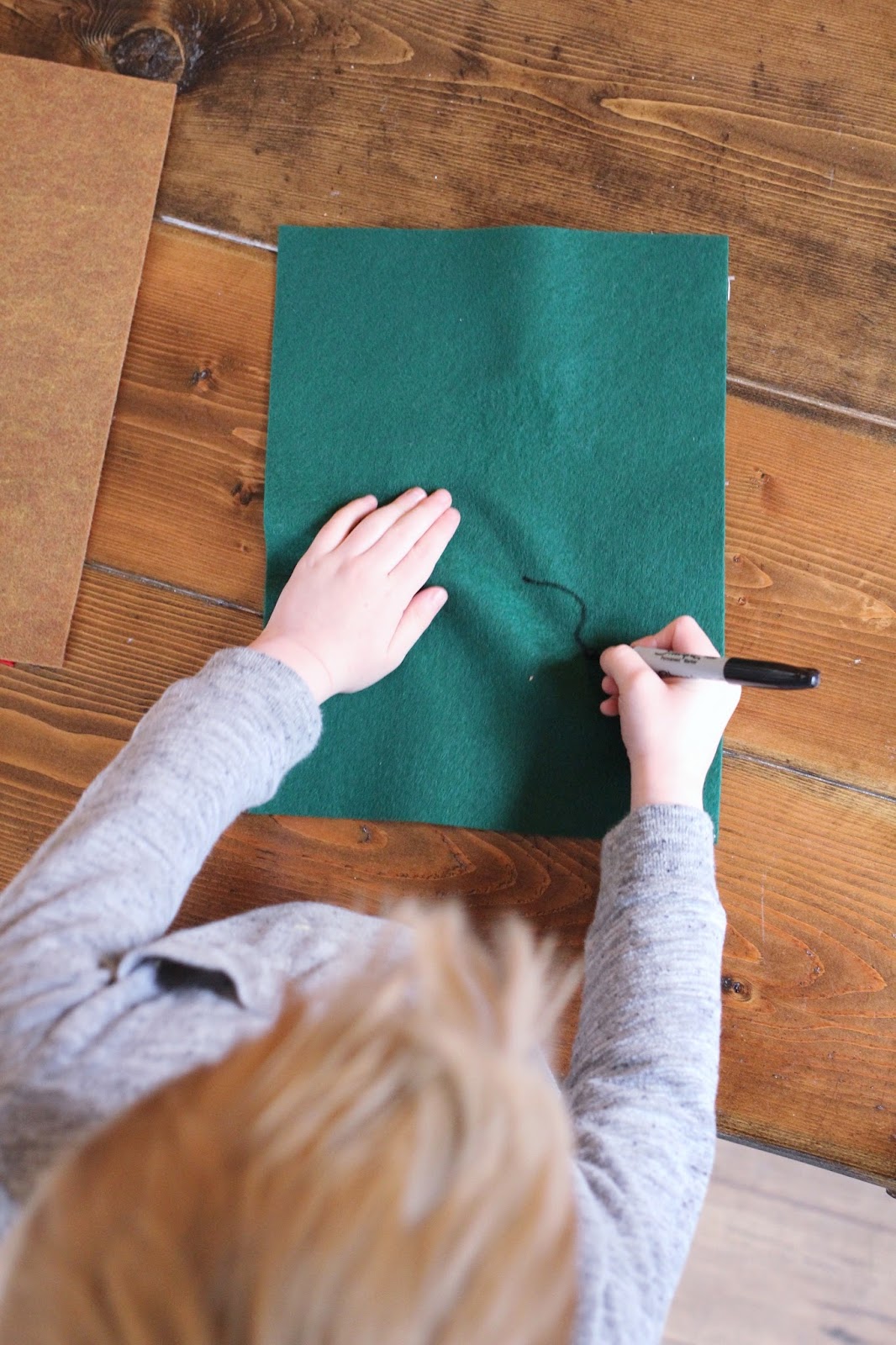 He’s only five and most definitely inherited my drawing skills. So I had to help him out a lot with this step. He told me what else he wanted to draw (presents of course!) and I helped/guided him. And then I cut the felt out too (because nobody has time for childproof scissors). 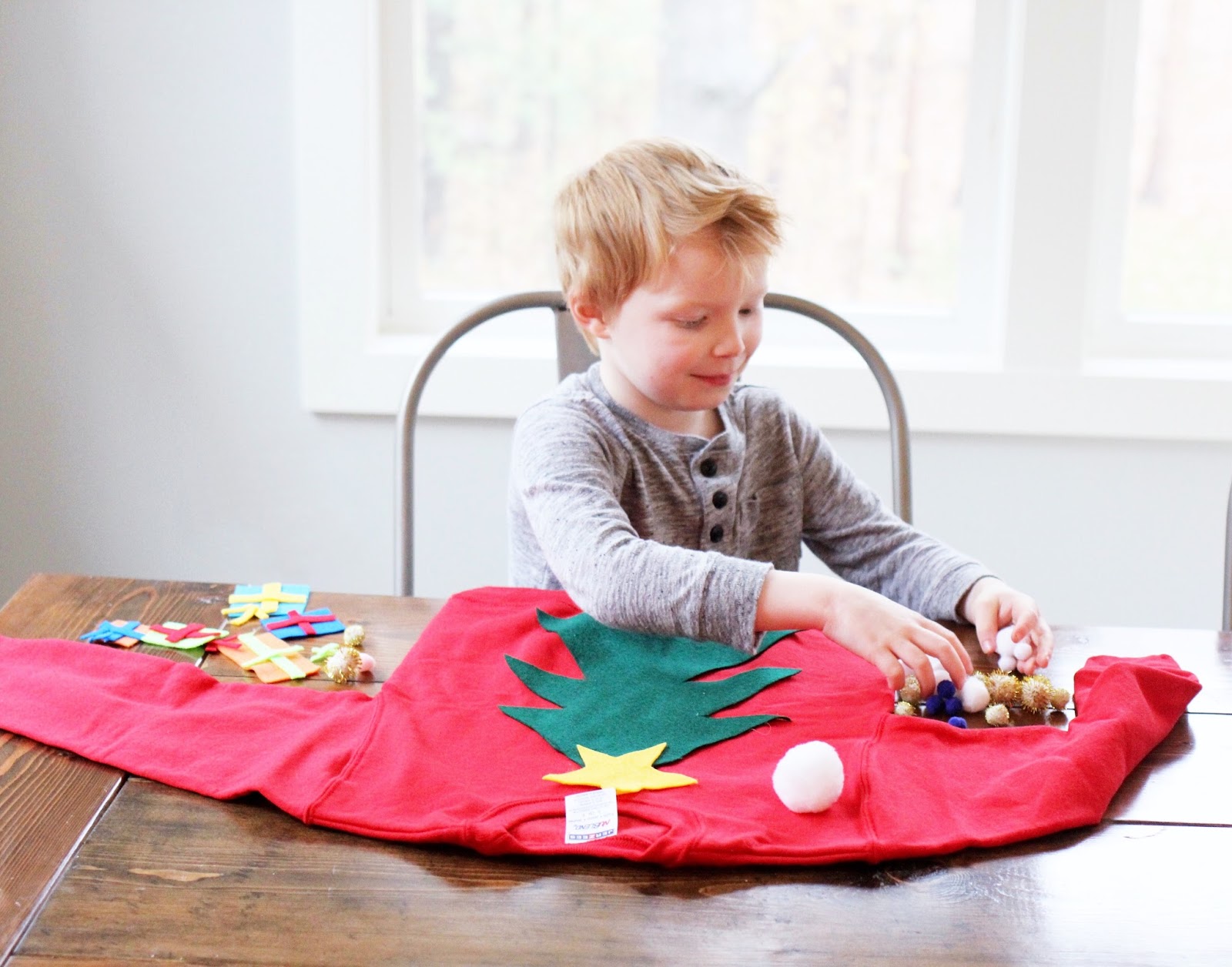 After I cut out all of the pieces (while he had a snack of course) Hudson started placing them on the sweater where he wanted. He could have just played with the felt pieces all afternoon! 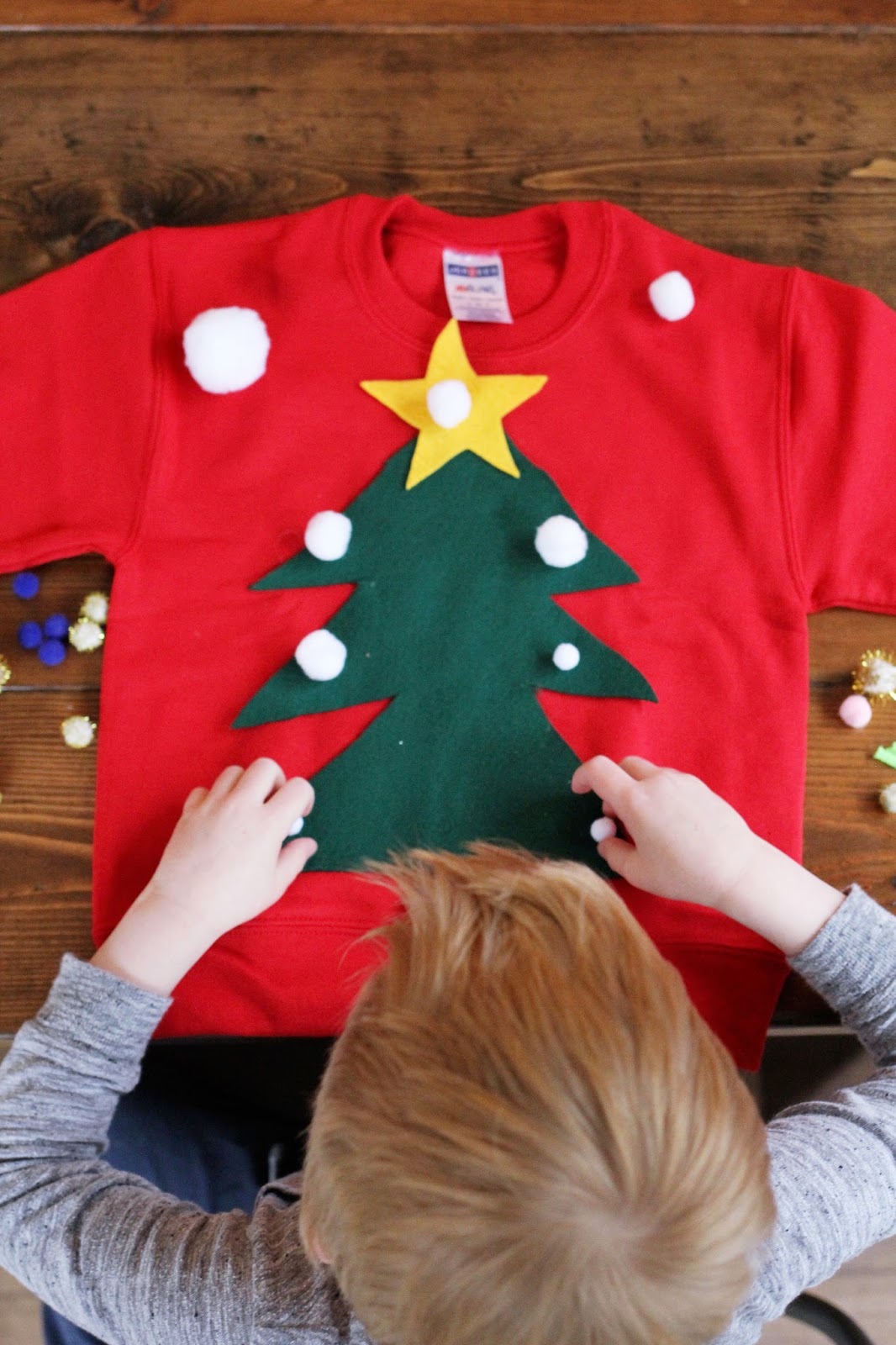 I loved watching his creativity in action. Once he had everything lined up just how he wanted, we worked together to glue everything down. 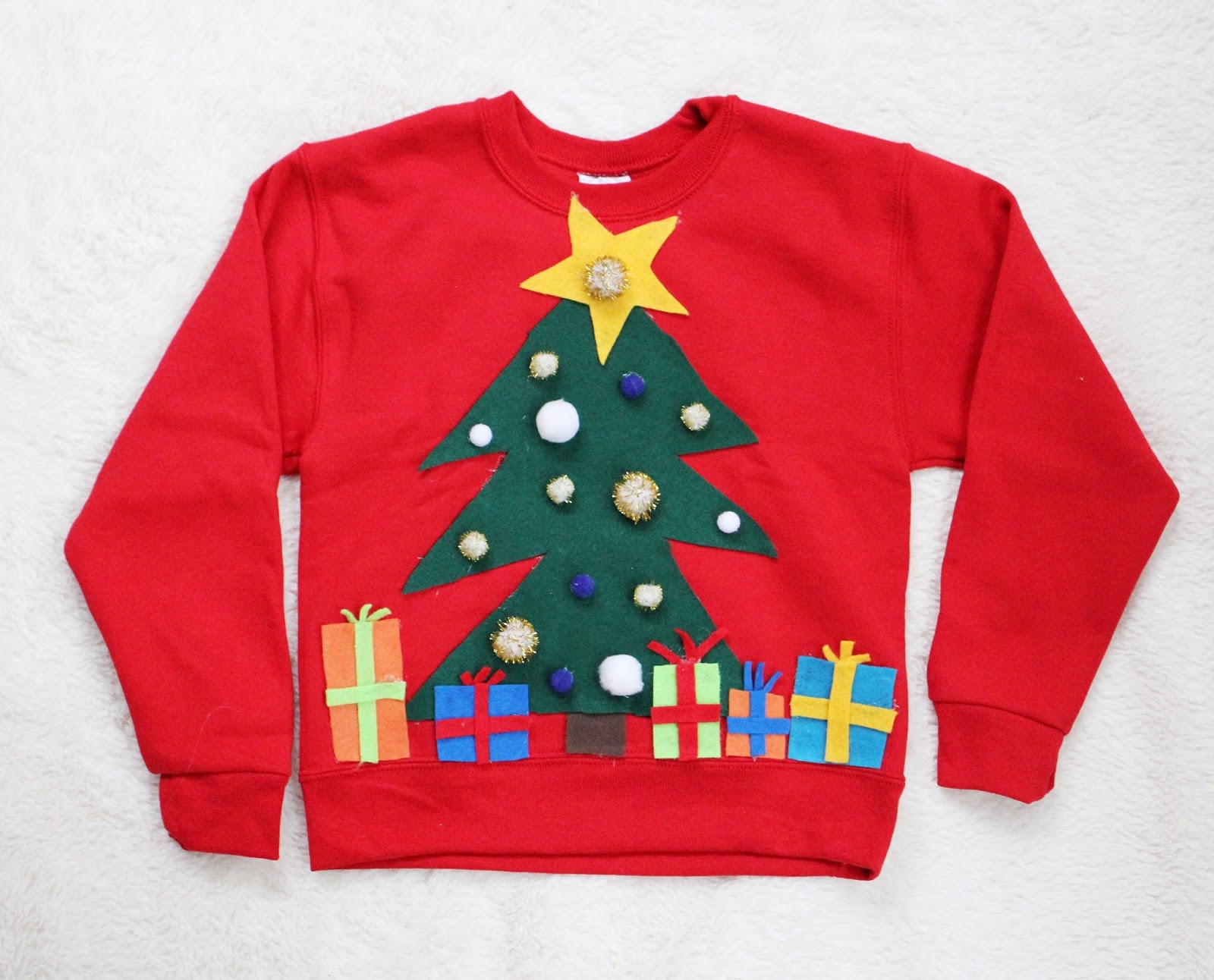 And here’s how it turned out! Isn’t it adorable? I’m obsessed. 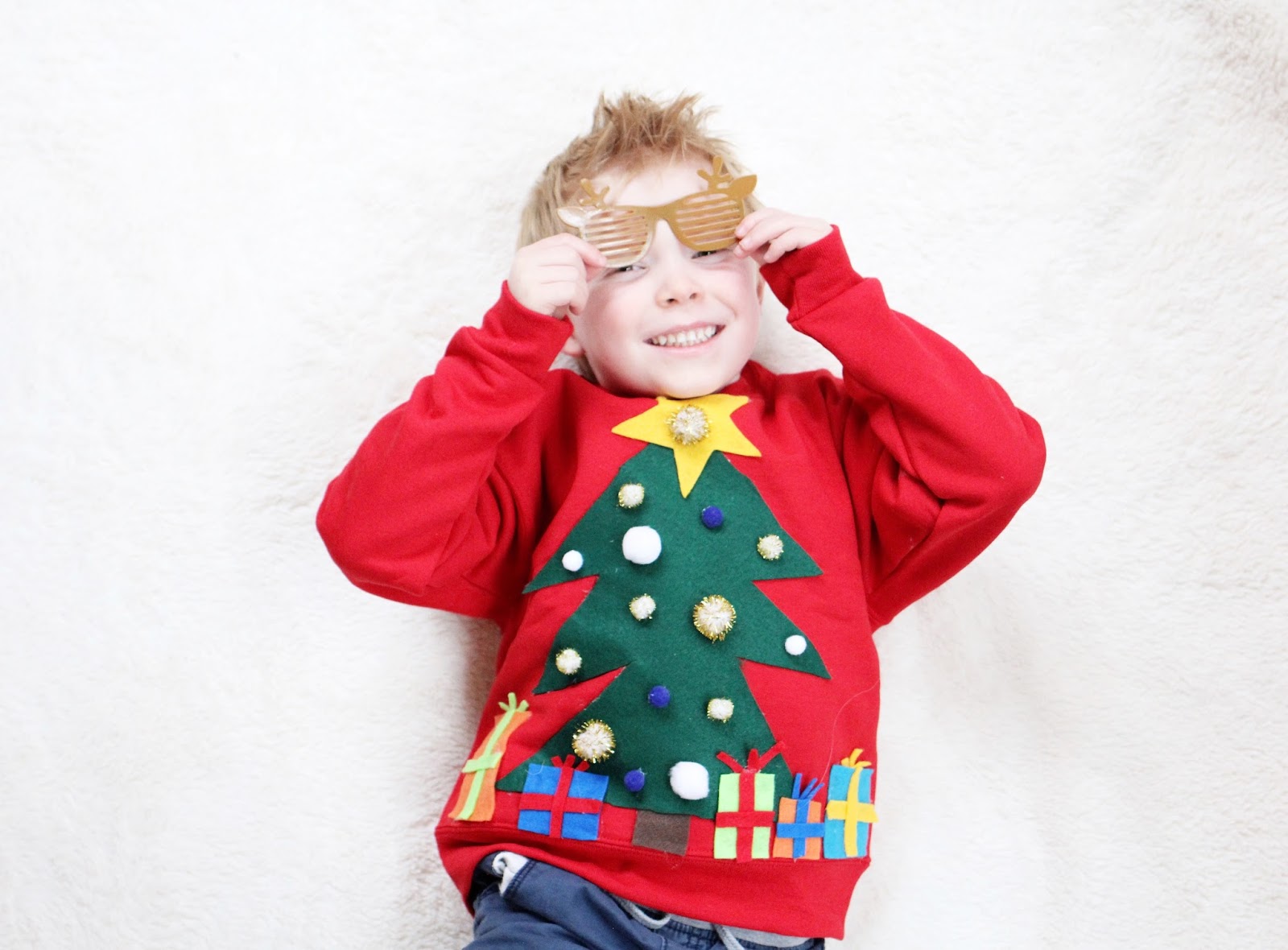 And this guy was pretty proud of his work! 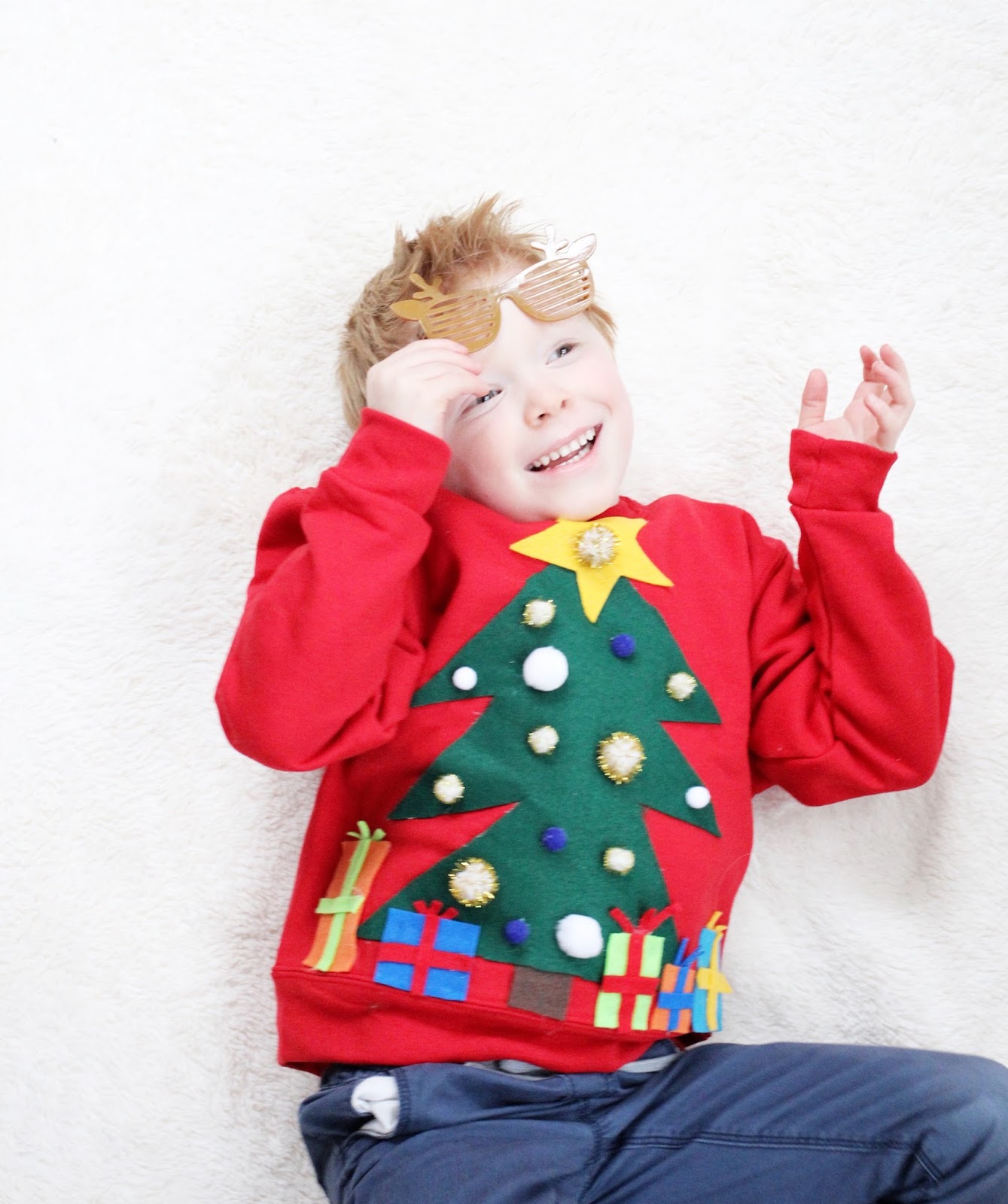 He’s excited to wear his sweater to school during his holiday party! He thinks it’s cool that no one else with have a sweater like his. 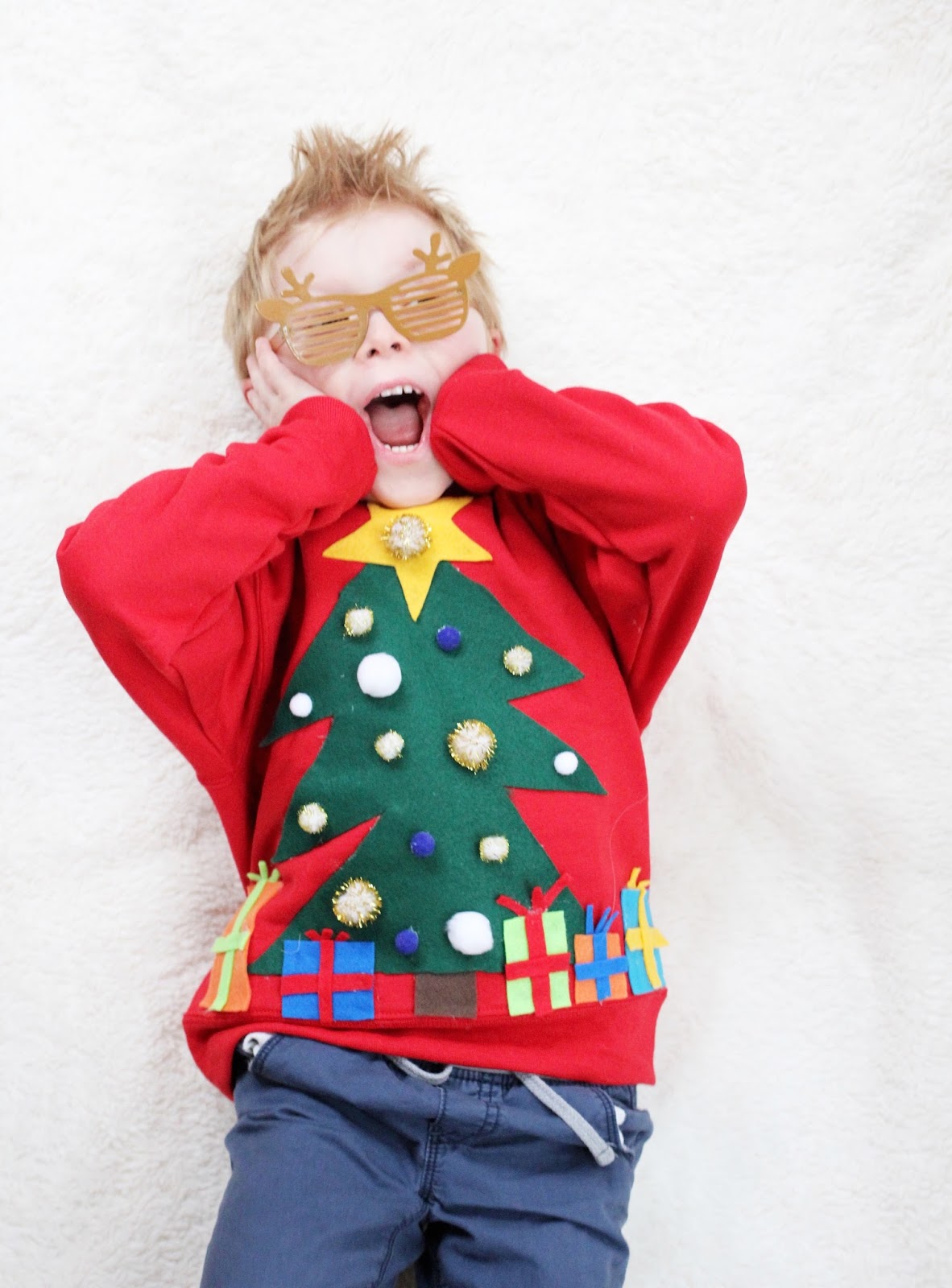 I asked him to do the Home Alone face and this is what I got. Priceless. And priceless memories made with my sweet boy.
Do you have an ugly holiday sweater? Or a cute one? I’m thinking I just might need to make one for myself too. 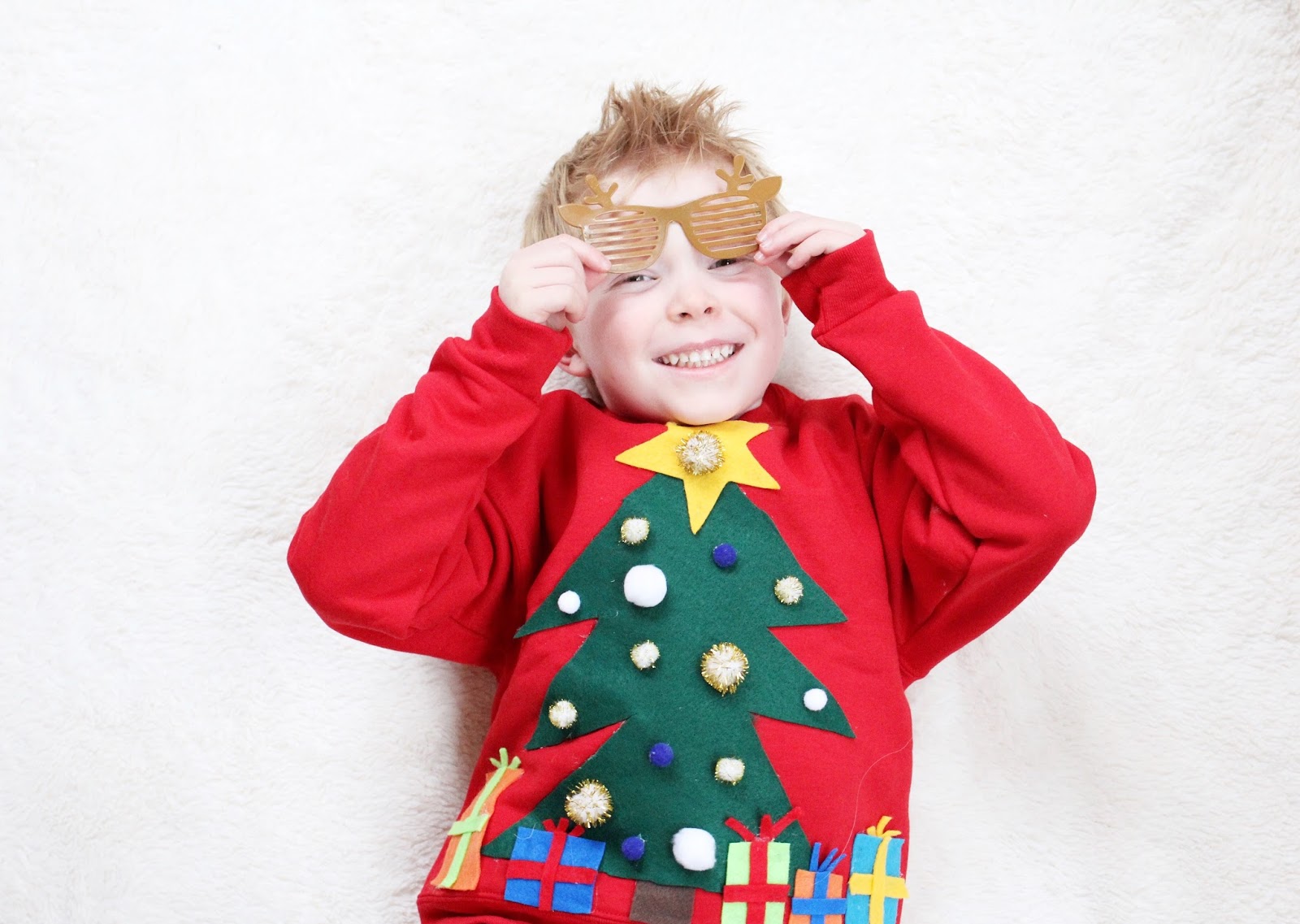 Looking for another fun holiday craft to do with your child? Check out my easy handprint plate tutorial here!