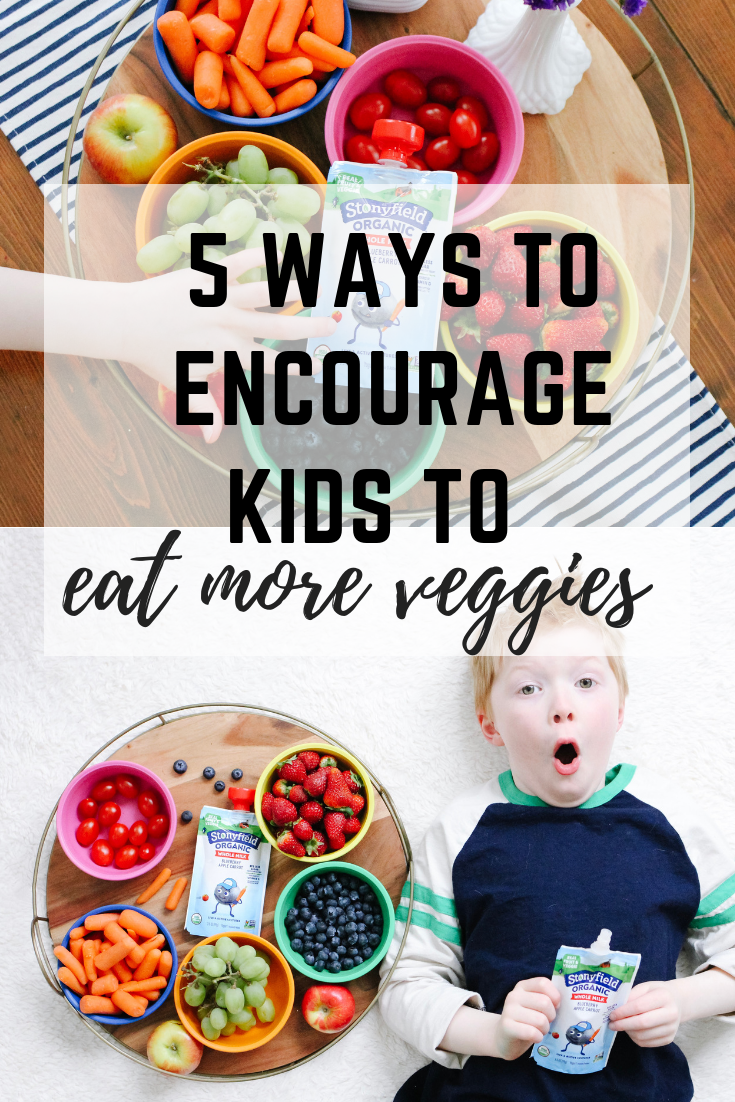 The vegetable struggle is REAL in our house. And it has been for a few years now. I remember when Hudson, my six-year-old, was an amazing eater. He would eat just about anything, veggies included, that I put in front of him. And of course, I thought that I had just raised an amazing, perfect child who would always be willing to try new foods and eat all the good things. Boy was I WRONG. The minute Hudson turned two and a half, he had a brand new opinion on everything….including what he ate. He basically refused to eat anything that wasn’t mac n’ cheese or apple sauce. 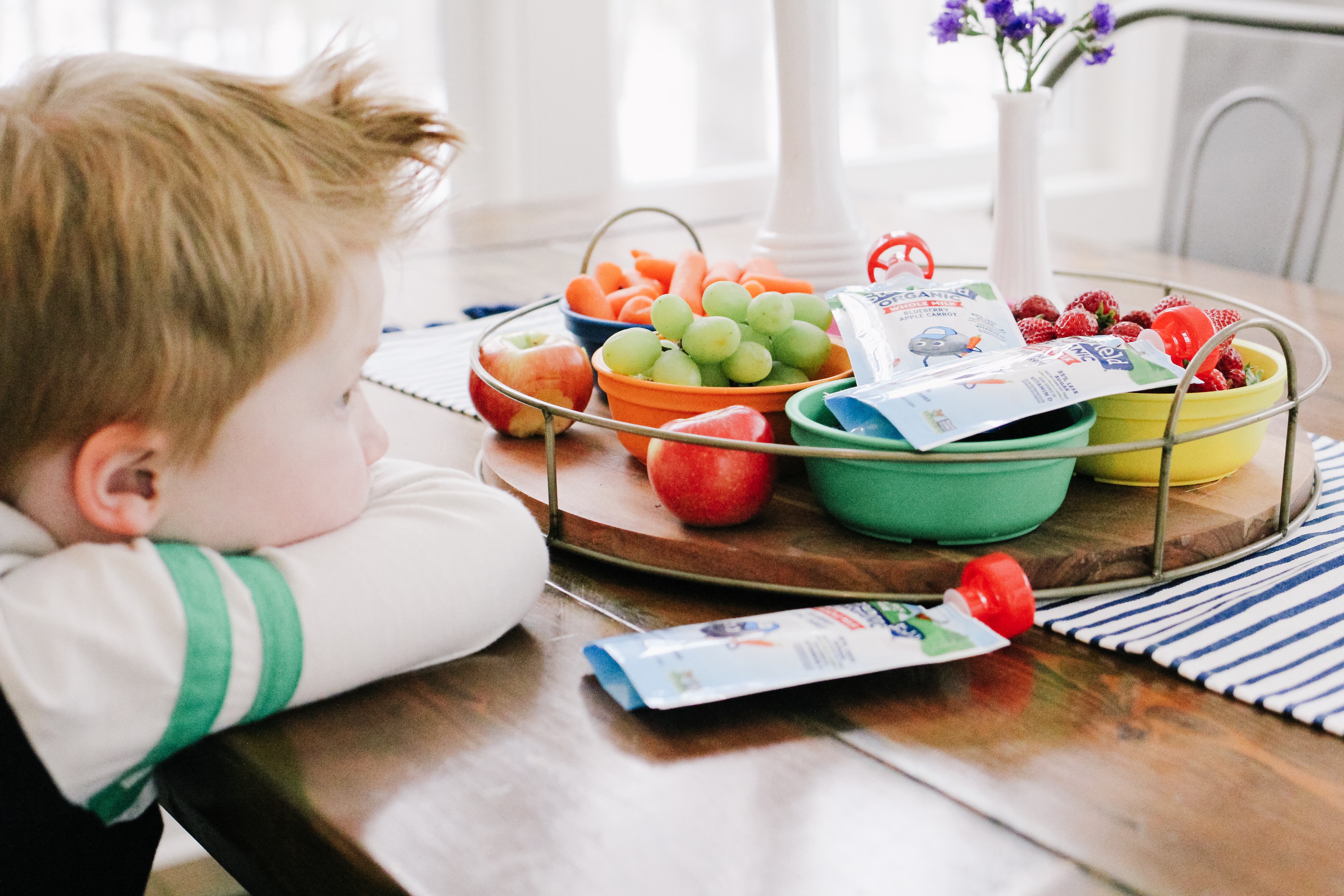 And here we are, with a healthy, growing six year old who STILL prefers those same two foods….and not much else. It’s been a years-long struggle to get Hudson to eat more vegetables and protein. Thankfully, my girls are not as picky. Over the past few years I’ve discovered a few simple tricks to beat those veggie blues, though. Today I’m partnering with Stonyfield® Organic Kids® to share how we get our kids to eat more veggies and try new foods! 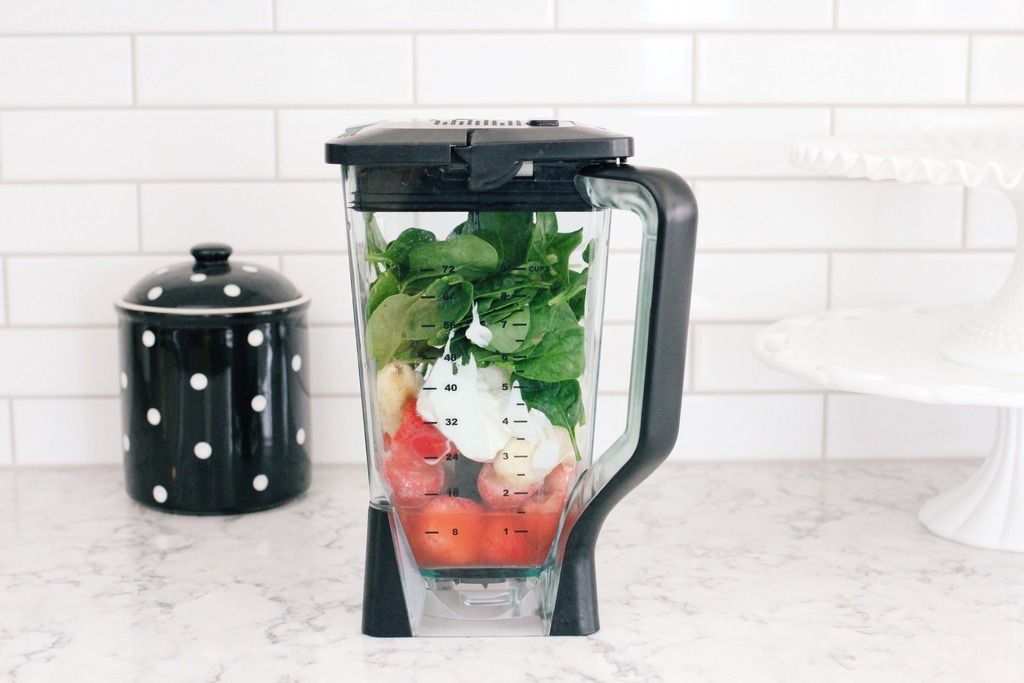 1. Put it in a smoothie! From an early age, Hudson was obsessed with smoothies and I just ran with it. I discovered I could basically put ANYTHING in a smoothie and he will drink it. This was a MAJOR mom win. So now I sneak whatever fruits and veggies we have on hand in to his smoothie. I’ve even put in frozen cubes of pureed carrots that the baby didn’t eat (shhhh….it’s my secret!) Now, all three of my kids request a smoothie each morning as soon as they wake up. Our go-to smoothie recipe is: frozen strawberries, 2 bananas, 1 cup yogurt (we like anything by Stonyfield® Organic Kids®), a giant handful of baby spinach (yes, spinach!), and a splash of juice, followed by water, as needed. I toss whatever we have on hand in there like extra kale, mango, blueberries….anything! Hudson loves that his smoothie is green because it’s one of his favorite colors! On occasion I run out of spinach and kale and have to make a smoothie without it….and he does NOT like them to be pink (thanks to the strawberries), so I usually cover up the pink with some blueberries. He’s such a boy! My girls don’t care what color their smoothie is, they just think that drinking one makes them a big kid, so we roll with it! 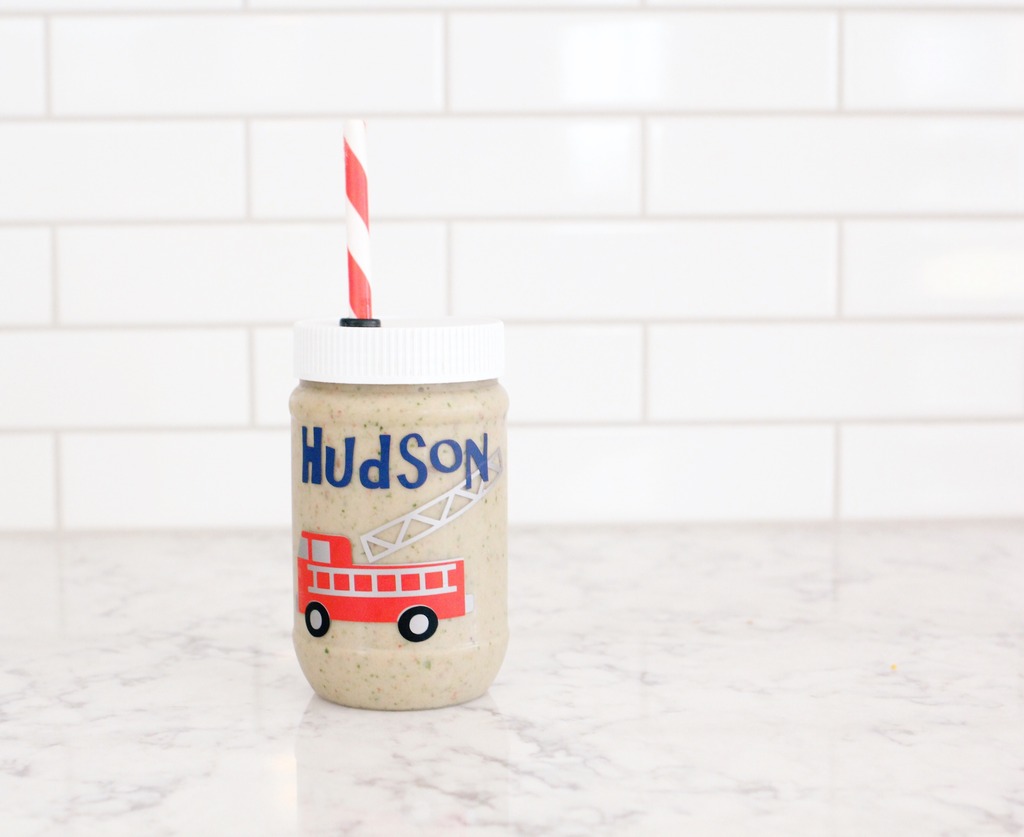 Our pediatrician always compliments our smoothie making and said that even though the fruits and veggies are all blended up together, the kids are still expanding their palate to those particular tastes….so that one day they’ll eat all of those healthy things individually and like it! Smoothies have made such a difference in my house. If one child has a particularly picky food day, I rest assured they have at least had their morning smoothie that was healthy! 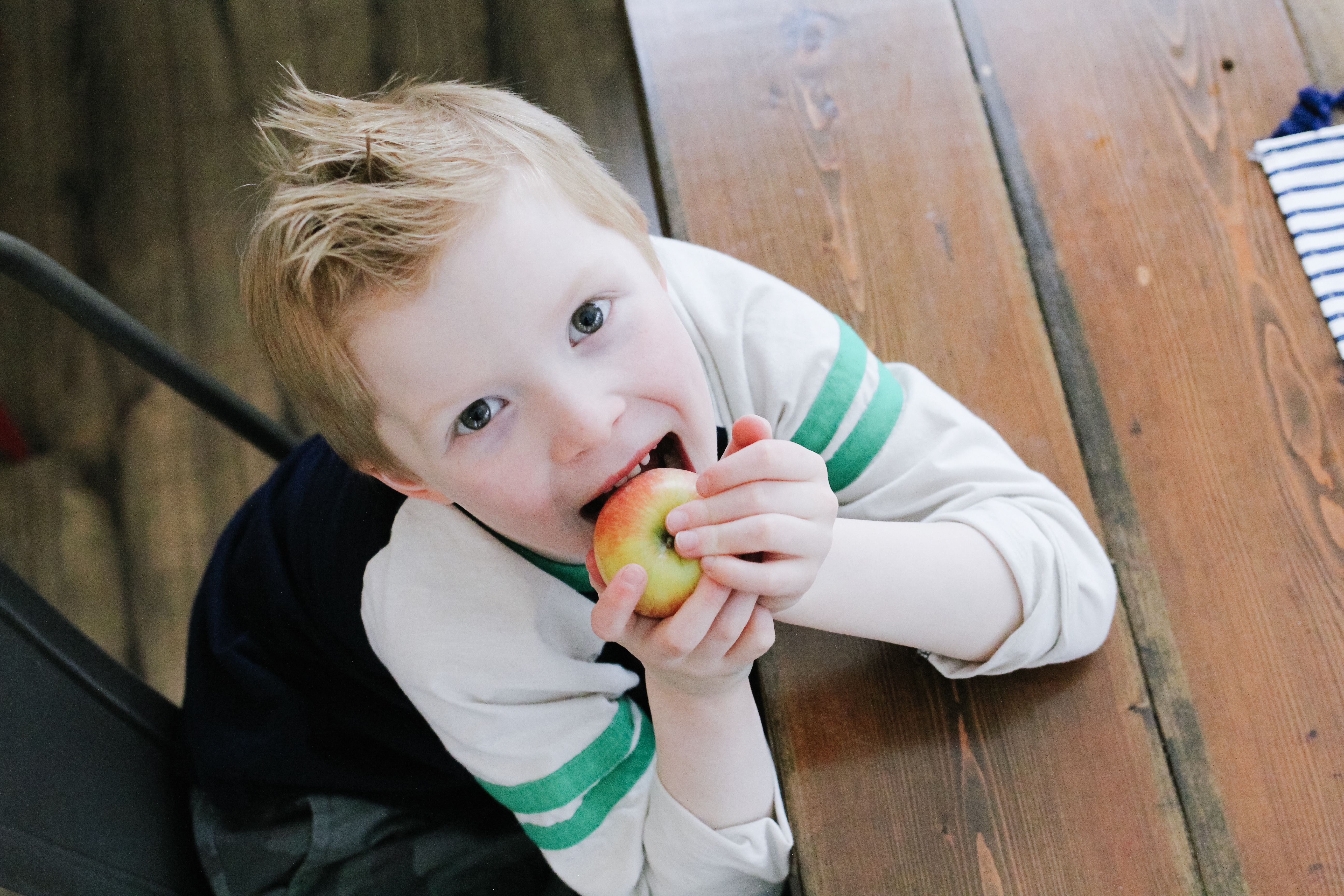 2. Let your child pick out their own healthy snacks. This one is huge in our house. My kids are more likely to eat anything they had a hand in selecting. They take pride and ownership in making their own decisions, so I like to encourage that feeling of independence as much as possible. When we grocery shop, I love to let each kid pick out something from the fresh produce aisle. They can select one new thing to try (usually a vegetable) and one tried and true favorite. They have blown me away with their excitement over trying something new that they picked out. Hudson often says he doesn’t like something that he’s never even tried….so this is a great way to encourage him to try new things. If he doesn’t like a particular food, that’s fine, we’ll find something different to try the next time. 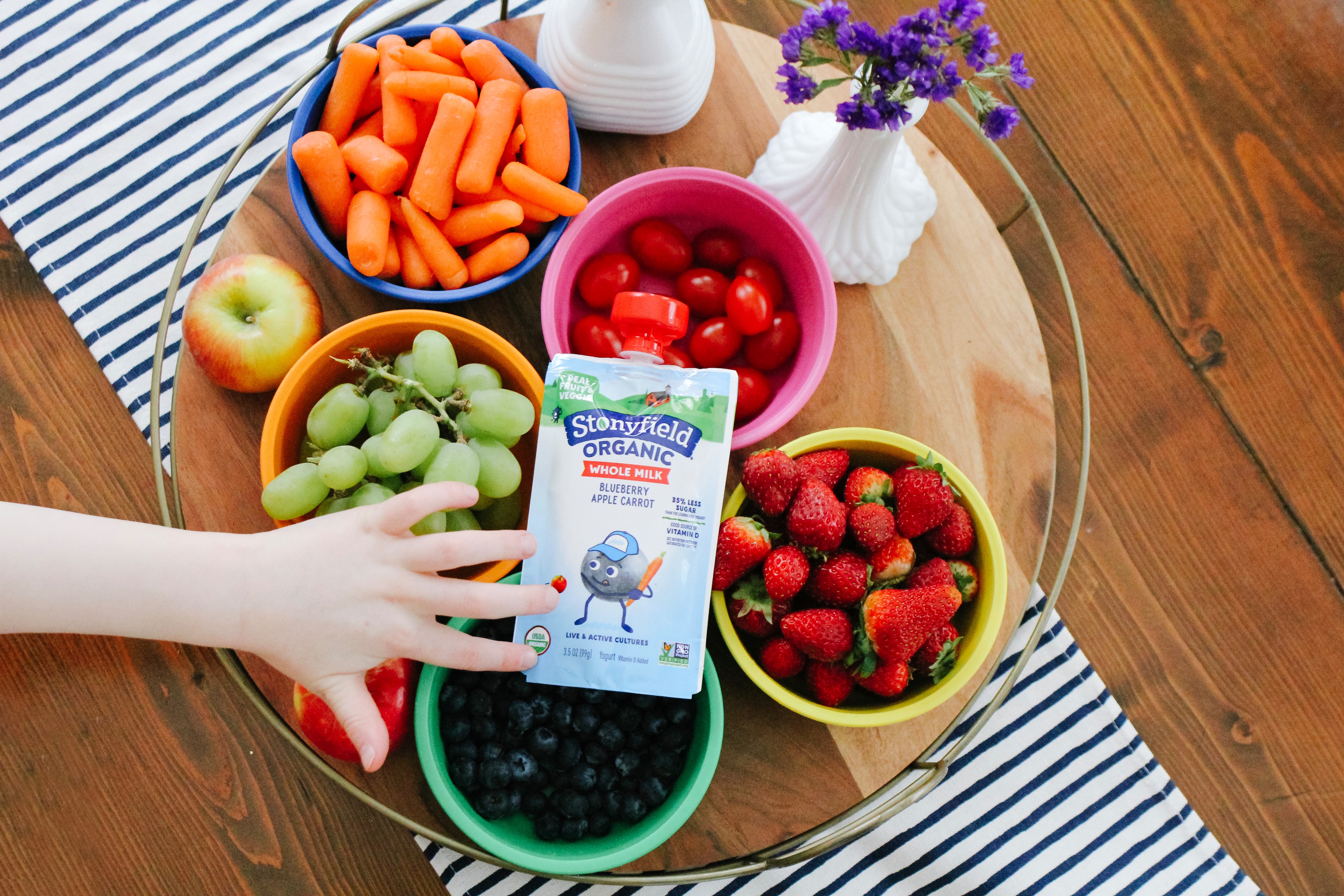 3. Get them involved in food prep. All three of my kids love to help me out in the kitchen. Hudson mostly enjoys washing the fruits and veggies we selected, “helping” me cut them, and then placing them in colorful bowls at snack time. He might only take one bite of each thing, but I count that as a win! His willingness to try something means SO much to me, and he is much more open to trying foods that he had a hand in preparing. 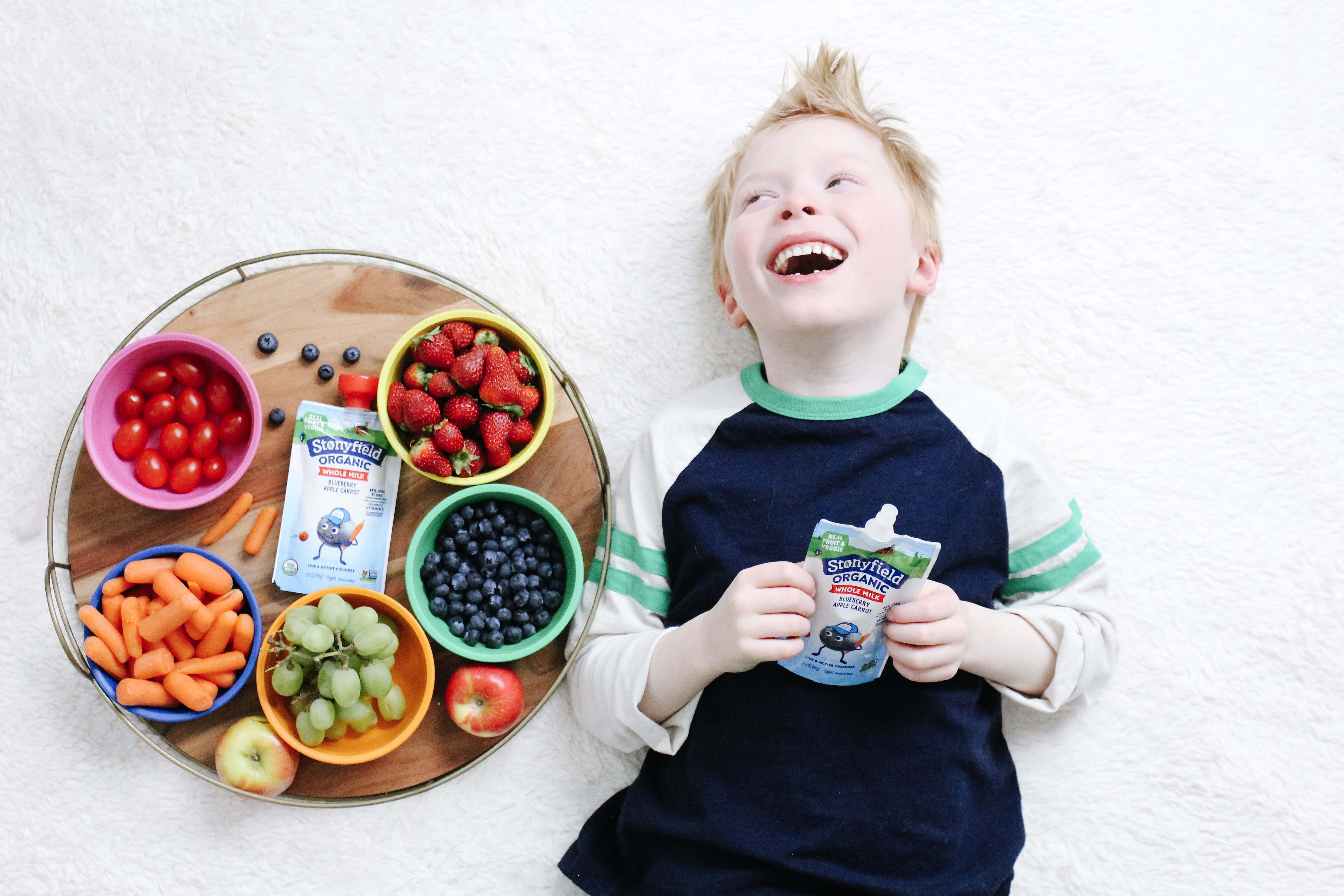 4. Sneak those veggies! I’m not above a little trickery. My girls are more likely to eat their vegetables without complaining, but Hudson is picky, so I have get creative. I love to sneak shredded carrots or zucchini into pasta sauces or sloppy joes. It’s good for all of us and no one notices! We also have a tried and true favorite yogurt that seamlessly blends yummy vegetables right in to their delicious yogurt…..Stonyfield®! Stonyfield® Organic Whole Milk Yogurt Pouches are a great option for even the most reluctant veggie eaters. Made with real fruit and veggies and 35% less sugar than the leading kid’s yogurt, Stonyfield® Organic Whole Milk Yogurt Pouches are the perfect snack for my picky eater…and the non-picky ones too! Hudson has no idea there are veggies in his yogurt. I won’t tell if you don’t! 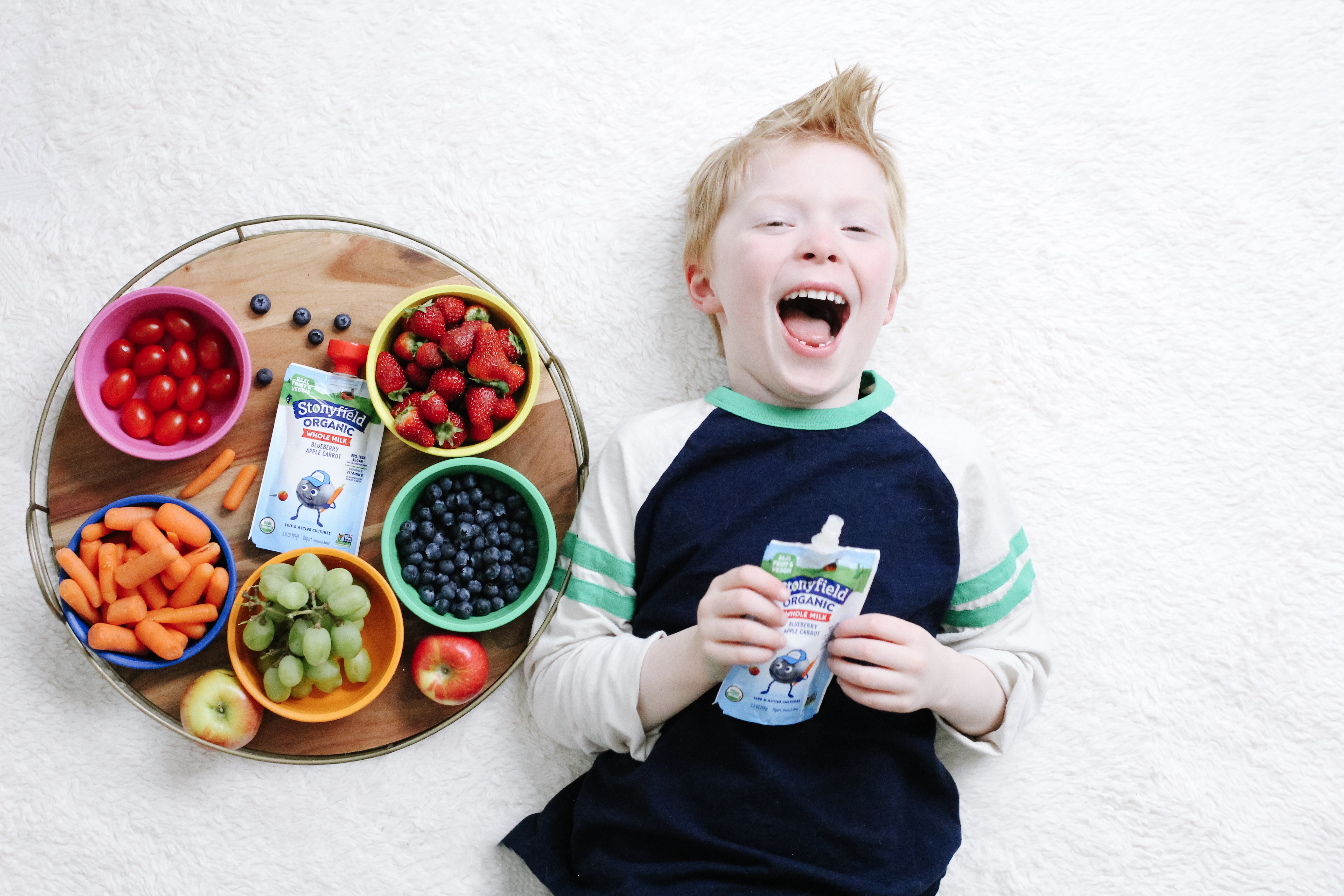 Stonyfield® Organic Whole Milk Yogurt Pouches are a great source of vitamin D and are perfect in school lunches! I typically toss one pouch of Hudson’s favorites, Blueberry Apple Carrot Whole Milk Pouch, in the freezer overnight, and then it goes straight in to his lunch box in the morning. It thaws out by lunch time! 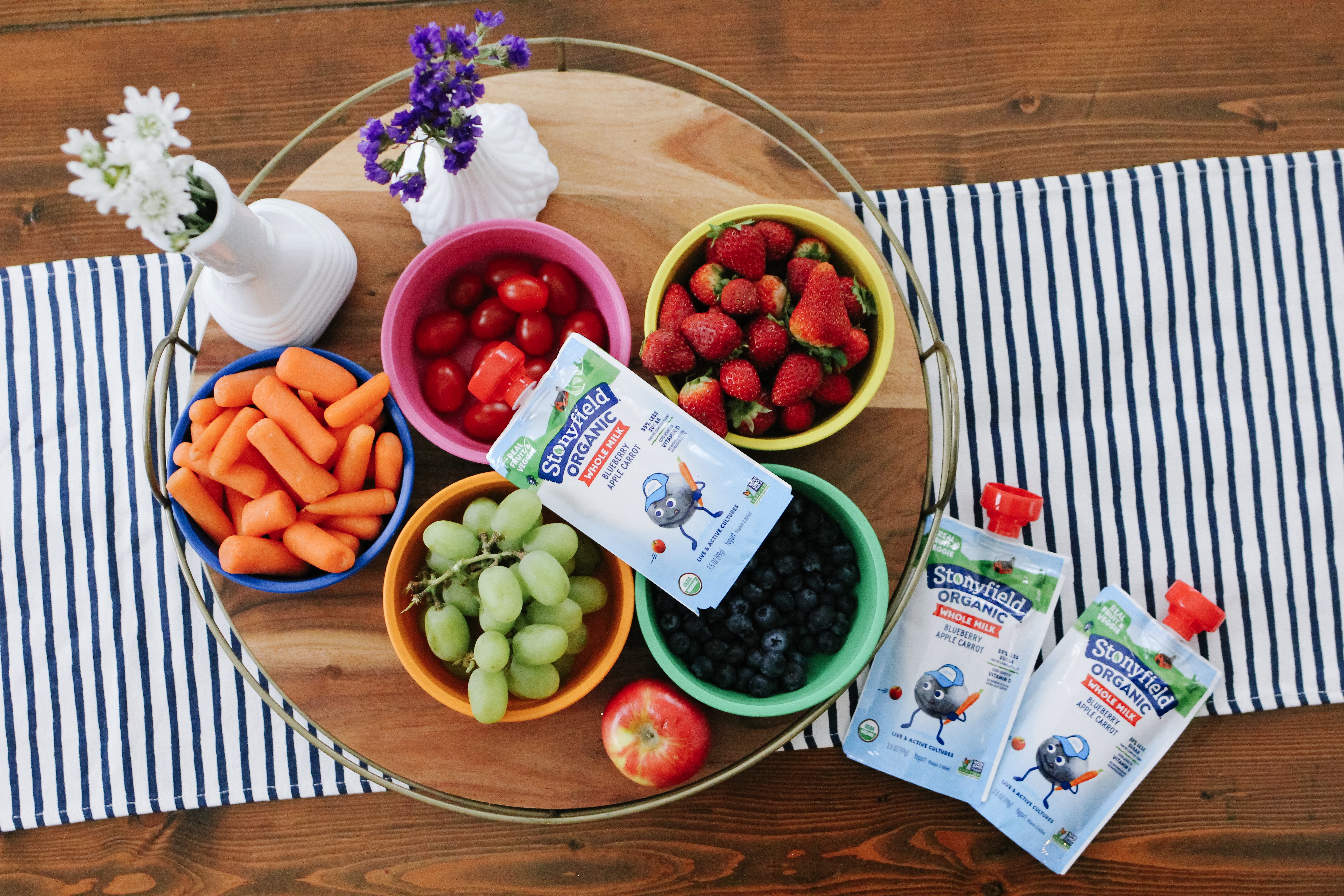 I love that Stonyfield® Organic Whole Milk Yogurt Pouches are organic, making them a snack I feel good about giving to my kids. In addition to our favorite flavor, the Blueberry Apple Carrot, the yogurt pouches also come in Apple Cinnamon Sweet Potato and other great flavors. 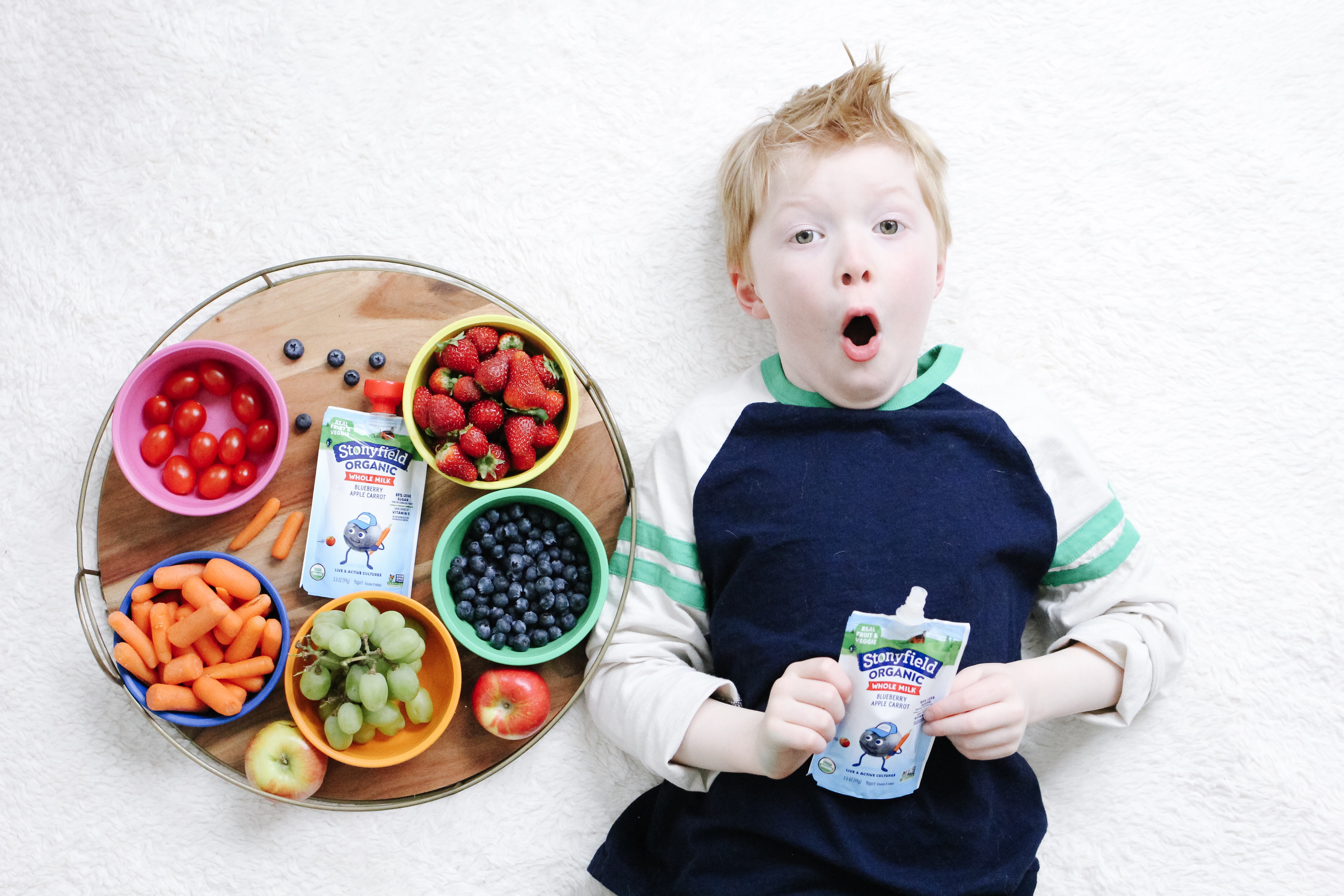 5. Don’t force it. I’ve found that if I force my kids to eat something, it’s not fun for anyone. I don’t want to create unhealthy habits with food either. So we like our kids to take at least one bite of the food on their plate. It’s okay if they don’t like it, as long as they try it. And a side note: I pick and choose my battles. Sometimes my kids refuse to try something on their plate. Often I can persuade them to take a tiny bite, but sometimes it’s just not a battle I’m not willing to take on, so I let it go. And that’s okay. 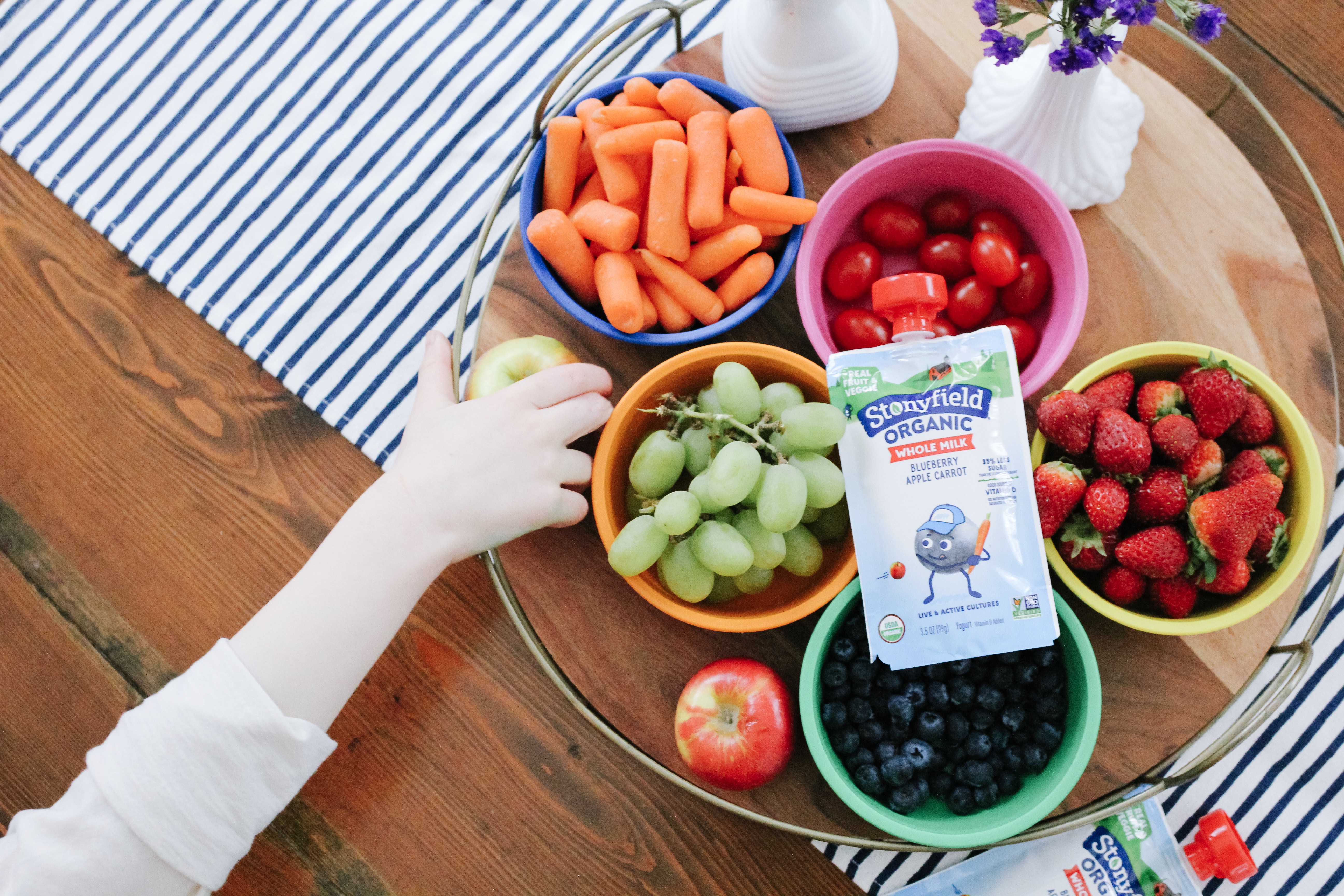 So that’s how we tackle the veggie battle in our house. I’d love to hear your ways of getting your kids to eat more vegetables!

This post is sponsored by Stonyfield® Organic Kids®, but our love for their yogurt, and all opinions are our own.

The big kids are finally back to school full time,